A partnership with Rhapsody means discounted (or free) music

T-Mobile announced its latest "Uncarrier" move today: a partnership with Rhapsody to offer free and discounted internet radio service to its customers. Called Rhapsody Unradio, T-Mobile says the service aims to address the "pain points" customers have with traditional internet radio services such as Pandora, namely limited skips, ads, and a lack of offline capabilities. With unlimited skips, offline options, and no ads, Rhapsody Unradio is like a juiced-up Pandora, but it's not a complete on-demand service like Spotify, Rdio, or even Rhapsody's own premium service. It will be available for free to T-Mobile's Simple Choice Unlimited customers (who pay $80 per month for their service), while other T-Mobile users will be able to get access to it for $4 per month. (Non-T-Mobile customers can subscribe to Rhapsody Unradio for $4.99 per month.)

While Rhapsody Unradio doesn't have the same kind of hype that Spotify or Beats Music enjoy, it does boast a catalog of 20 million songs and is the second most popular streaming music service in the world. But this isn't really an attack on Spotify or Rdio — it's going straight for Pandora, which is more popular than any other streaming service. Pandora claims to have 77 million active users as of May 2014, while Rhapsody says it has 1.7 million paid subscribers and Spotify is reported to have 10 million paid users (with another 30 million that take advantage of Spotify's free, ad-supported service). 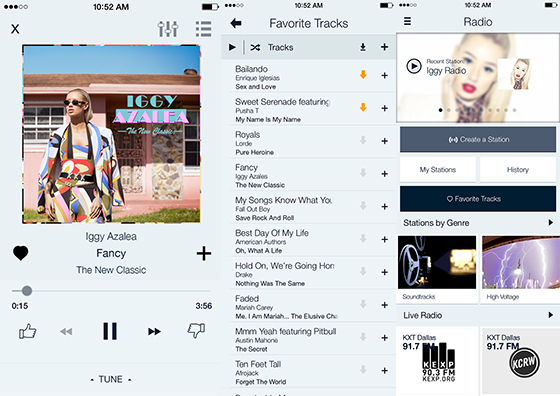 Rhapsody Unradio 'bridges the gap between free and on-demand'

Paul Springer, Rhapsody senior vice president, says that the goal with Unradio was to "bridge the gap between free and on-demand, but still come up with something people are willing to pay for." Unlimited skips, no ads, and access to the full catalog of Rhapsody songs are all features that customers are looking for in a streaming radio service, claims Springer. Rhapsody Unradio also lets users save songs offline for listening in the subway, on a plane, or any other time there isn't a constant connection. Users can also tune in to thousands of AM/FM radio stations from across the country via the app — but it lacks the ability to listen to full albums consecutively or organize a library of music, something that separates it from Spotify, Rdio, and Beats Music (all of which also offer internet radio features). If you want those capabilities, Rhapsody is offering its premium, on-demand streaming service to T-Mobile Simple Choice Unlimited customers for a discounted rate of $5.99 per month (the service normally costs $9.99 per month).

For T-Mobile, this is the first time it's using the Uncarrier brand for something other than rate plan changes or phone pricing schemes. Carriers call this type of bundling a "value add" — it's not something that most people think about when they go shopping for wireless service, but it increases the perceived value of what they're getting from T-Mobile without upping the actual cost. T-Mobile is far from the first carrier to do this with music: regional carrier Cricket once offered a similar bundled service to its customers before it was acquired by AT&T, and T-Mobile owned MetroPCS even offers bundled Rhapsody service to its customers. (T-Mobile could not confirm if MetroPCS would continue to offer Rhapsody's full service or if it would be transitioned over to Rhapsody Unradio.) And AT&T offers an exclusive discounted family rate plan for Beats Music, which it launched earlier this year.

With T-Mobile's earlier Uncarrier announcements, it addressed real problems people had with their wireless plans in new and innovative ways, and in some cases effected industry-wide change. You can thank T-Mobile for the recent elimination of contracts and introduction of interest-free smartphone payment plans separate from your wireless rate plan that most carriers offer now. Internet radio isn't perfect — there's plenty to complain about with Pandora — but the reality is it's not as vital and significant of a service as your wireless plan, and it's consequently not as important to many people.

More from this stream T-Mobile becomes the 'Uncarrier', drops contracts and launches LTE