Iraqis seek out new tools to blast through internet blockade

Share All sharing options for: Iraqis seek out new tools to blast through internet blockade

As Iraq struggles with sectarian conflict, the country has seen severe web restrictions, including the blocking of social media and the cutting off of web traffic at large for hours at a time. In response, Iraqis appear to be rushing to circumvention tools in unprecedented numbers.

Firechat, a messaging app that allows for phone-to-phone messaging, has seen 30,000 downloads in Iraq since Saturday. In terms of usage, Iraq is now the app's second biggest market after the US. The company that makes Firechat, OpenGarden, has also seen a jump from other countries, suggesting many in Iraq may be downloading the app through a VPN. "We had always seen some usage in Baghdad," says OpenGarden executive Christophe Daligault, "but what's happening now is on a completely different scale." 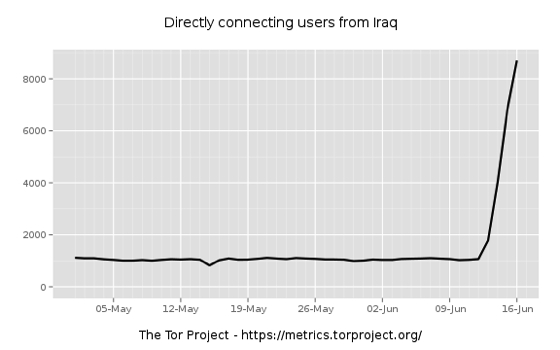 Other circumvention tools have seen a similar bump, particularly the Tor Project, which has surged to eight times its normal Iraqi user base. The government responded to the surge by blocking Tor's website, making it more difficult to download Tor software but not blocking access to the network itself. Still, the usage numbers show no sign of slowing down. It's still unclear how the services are being used but it seems likely that, as the government clamped down on social media to stifle opposition forces, much of the country looked to tools like Firechat and Tor to circumvent the blocks.