Do six cameras add up to more than a gimmick?

Amazon stepped into the smartphone race this afternoon with the unveiling of the Fire Phone, its very first attempt at building a smartphone. By most outward appearances, it's a strong first attempt: the 4.7-inch phone has a simple black body, a 720p display, a fast 13-megapixel camera, and plenty of processing power to keep things moving. Naturally, it's running a version of Fire OS, the highly modified version of Android that Amazon has been using on its Kindle Fire tablets for a couple years now.

That's all pretty standard fare, but there's one big difference here: the Fire Phone's interface changes based on how you're looking at it and how you orient the device. Amazon calls the feature "Dynamic Perspective," which basically means that some apps on the phone will have a three-dimensional depth to them, and tilting the phone will let you peer around edges, just as you can with real objects. It's miles away from the accelerometer-based gimmicks we've seen on older 3D phones. In fact, it's not really even fair to call it 3D in the traditional sense. You're looking around objects, but there's no attempt to make stuff pop off the screen. It's refined, but we'll have to really use the phone for a long time to know if it's something we'd actually want to use.

The phone also uses tilting to do a whole lot more. Just by moving the phone, you can pull up menus in Fire OS or scroll through text in an app. These tilt features have annoyed the life out of us before, but those Samsung and LG phones usually used the accelerometer to accomplish their effects. On the Fire phone, it works much better, but we're still not 100 percent sold on the idea. More interesting are some random tilt features that bring in panels from the left and right. It's not that much easier to use than a simple swipe, but in a funny way it does feel natural. But there's a fine line between neat tilt trick and annoying stuff popping up in front of you all the time — and only extended use will tell us which side of that line the Fire phone falls on.

Firefly, a way to scan and identify products and media around you just by pointing a camera at something

The phone's rear camera has a lot more work to do than just taking photos. It also facilitates one of the Fire Phone's key features: Firefly, a way to scan and identify products and media around you just by pointing a camera at something. Amazon wants you using this a lot, and it's put a dedicated button on the side of the Fire Phone that'll send you right into Firefly mode.

This lets the Fire Phone do a number of different things. For one, you can pull up more information about TV shows or paintings, you can look at a record to start a new radio station based on it, or you can scan in text, like a phone number. More important for Amazon though is Firefly's ability to identify products, like food and books. You can guess exactly where this feature is going: once you scan a product, you'll have the opportunity to buy it from Amazon. It's a clear shot at brick-and-mortar retail stores, giving shoppers an incredibly fast way to compare prices. And usually, there's a good chance that Amazon will win out. There simply has never been a better device to help you indulge in impulse purchases — a prospect that has us both intrigued and terrified in equal parts.

But just as a camera, so far it seems pretty solid. It's a 13-megapixel shooter that Bezos had the bravery to compare directly to the iPhone 5S and Samsung Galaxy S5 on stage. We obviously haven't had enough time to fully test it, but our dozen or so shots in decent light came out sharp, well-focused, and with good color balance. It's at least as good as your mid-to-top tier Android phone (even if that may not be the highest praise possible these days).

As for the OS, it's basically a slightly modified version of what Amazon has already created for the Fire OS on its tablets. You have a homescreen with a giant carousel of your most-recently used apps and content, along with a standard app grid underneath. It involves a lot of big, chunky graphics on a black background, but it's a remarkably consistent aesthetic that works for casual use, though power-users will probably want to look elsewhere. 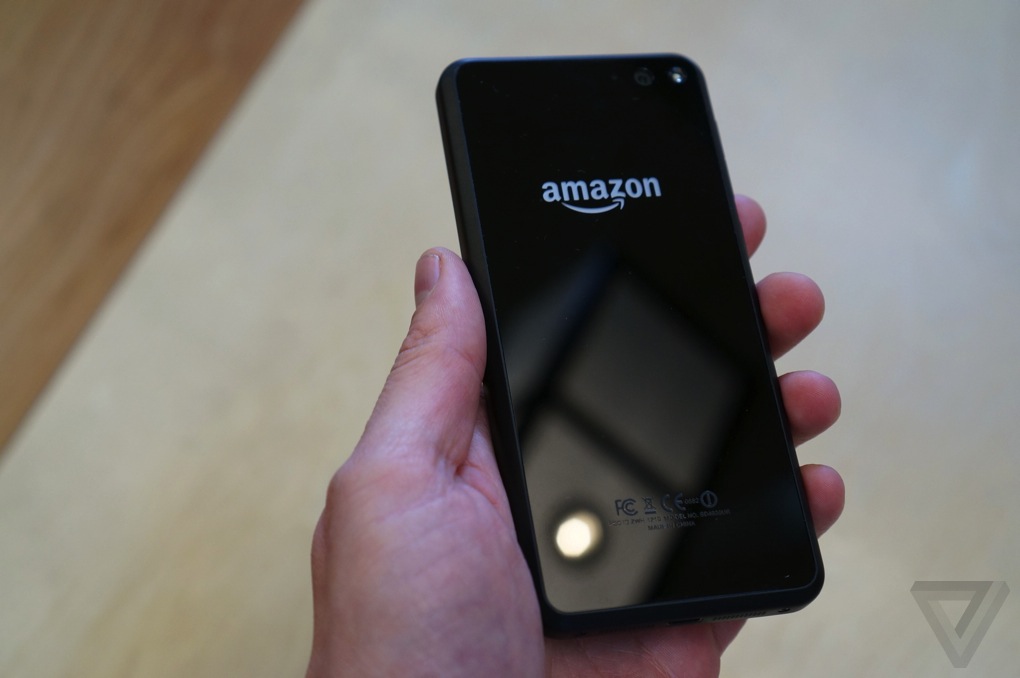 Amazon has baked in some power-user tricks, though. A swipe in from the left or right brings in various panes depending on your context. In email it gives you basic navigation and also a list of all your recent attachments. On the homescreen you get universal navigation and weather. All of these also come in with a quick tilt gesture, though to be honest we found it easier just to swipe. That should be a little worrisome for Amazon — one of the core features of the phone felt kind of unnecessary.

The same could be said for some of the other Dynamic Perspective features. Tilting a map to bring up labels or peek at the edge is a neat demo. But in real use it turns out that when you have a phone in your hands, you happen to have fingers that are right there and ready to be used to do stuff on your phone. The lockscreen stuff is super neat — a poker table where the time is literally printed on the felt was particularly fun to shift around — but after a couple of minutes it's hard to see what the functional advantage is here. On the other hand, we're excited to see what game developers can do here. 3D gaming on phones was a (well-deserved) bust, but this perspective stuff could be less annoying and inspire new ways of doing things in a game.

The hardware feels sturdy despite the glass back

The hardware fares a lot better, though to be clear this doesn't feel as premium and amazing as something like the HTC One. That said, it does feel super solid, if just a tad on the chunky and heavy side. We had thought we would never again risk using a phone that had Gorilla Glass on the front and the back, but combined with the rubberized edges it's not quite as worrisome. It gives of an ethos of sturdiness and compactness — a fact helped by the 4.7-inch screen that's pretty close to the ideal size for Android (or, in this case, Fire) phones.

The Fire Phone is available to preorder today but won't start shipping until July 25th. It costs $199 on a two-year contract, and is an exclusive to AT&T for now. The Fire phone makes a neat first impression, but it has a mid-range ethos to it that makes the total asking price feel a little steep. Luckily, right now Amazon is throwing in one year of Amazon Prime for free, including for existing subscribers, which makes the world's ultimate buying machine a little easier to buy.