Share All sharing options for: Apple is providing T-Mobile with free iPhones for 'Test Drive' program

Just who is providing all the iPhones that will be offered to potential T-Mobile customers as part of a new program that lets people test drive the carrier's network for a week? Apple. That's according to T-Mobile CEO John Legere, who said Cupertino is doling out the now nine-month-old handsets free of charge.

The test drive program, which was announced today at the company's "Uncarrier 5.0" event, lets anyone take home an iPhone 5S that runs on T-Mobile's network, and comes with the company's unlimited plan. At the end of the week, people bring the phone back, and either sign up for a plan or return it with what T-Mobile says are no strings attached. Legere said he expects the company to do a million test drives within the first year of the program. That's a relatively small number of phones for Apple, which sold 43.7 million iPhones in its last quarter. T-Mobile is also not initially offering the service with devices made by other manufacturers, something that clearly benefits Apple this late in the iPhone 5S's lifecycle.

Apple's own policies at its retail stores are far more stringent. Buyers need to actually purchase the device if they're not simply trying it out in store, and need to sign up to a carrier agreement as well. We've reached out to Apple for more details on the deal, and will update this post when we know more.

We picked up a sample Test Drive pack after T-Mobile's event, and a representative told us it was indicative of what customers would receive. Interestingly, it is very far from Apple's carefully executed packaging. It includes all the essentials for an iPhone, but in packaging that seems closer to what you get when you receive a refurbished phone. 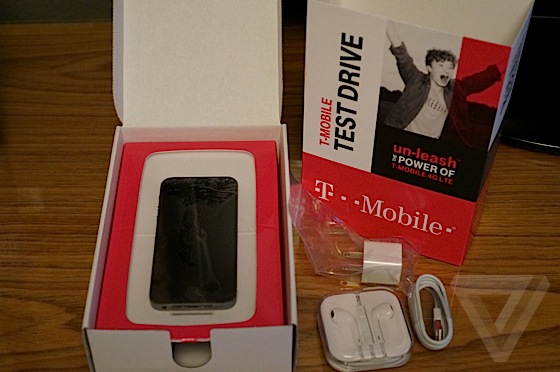