Now you can turn strangers into remote-controlled avatars

Now you can turn strangers into remote-controlled avatars

A startup called Zabosu is looking to kickstart a mobile marketplace for "remote-controlled humans." If successfully funded, the service will allow people, or "directors," to hire "actors" who will serve as their proxies in remote trade shows, distant building sites, and so forth — anywhere a 4G signal can be found.

While tasks will normally be outlined at the start of a transaction, directors will also relay verbal instruction through their microphones to the actors. And like Her's Theodore showing the world to a loveable artificial intelligence, the actors will livestream audio and video to the directors. All of these interactions are conducted through the website and a free Android app called ZabosuConnect.

The concept of having someone control another from afar isn't particularly new, having been thoroughly explored both in science fiction and the real world. However, Zabosu's approach is among the better defined. The company aims to raise $100,000, and has promised to refund contributors if it fails to launch by the end of the year. You will need to pledge at least $50 to be among the first to gain access. 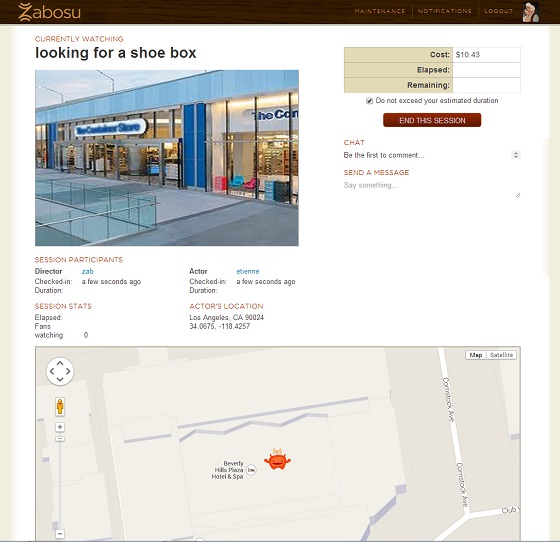 This is Zabosu's second attempt at crowdfunding the idea, the first of which was aborted after about a week. CEO Karl Lautman explains over email that the company had chosen to attend a TechCrunch pitch-off in early April. "We had a choice between participating and trying to leverage sufficient PR from it to support our Kickstarter, or passing on it in order to devote an appropriate amount of time to a formal PR campaign," Lautman writes. When it became obvious that the pitch-off would not offer sufficient leverage, Zabosu cancelled its Kickstarter to "regroup around a proper PR campaign."