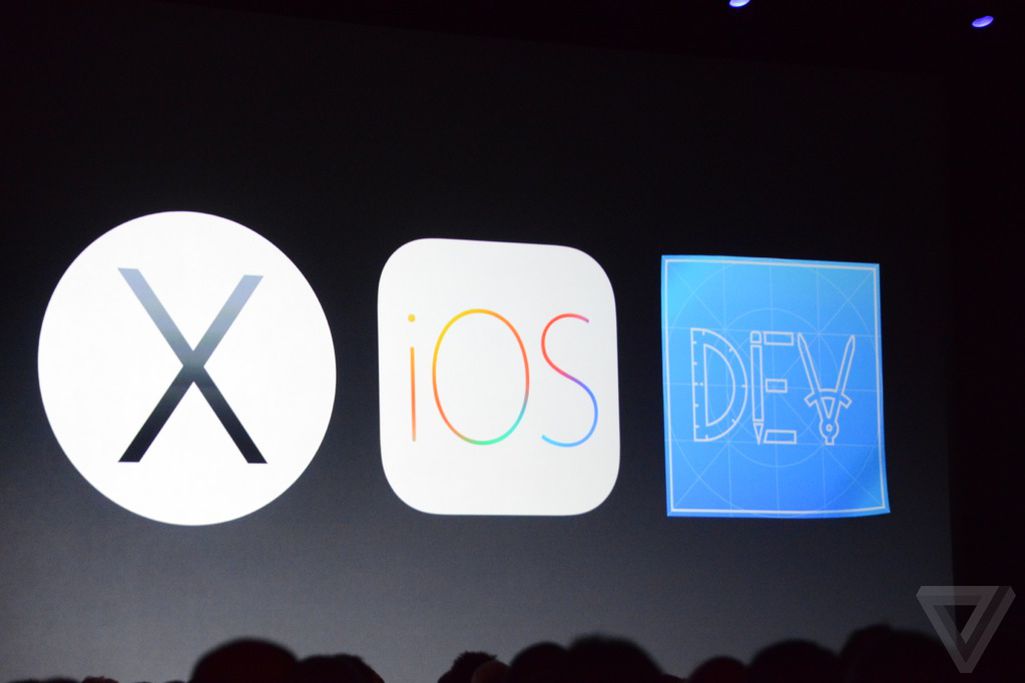 Apple kicked off its Worldwide Developer Conference with a glimpse into the future of OS X, iOS 8, and the developer tools that bring them to life. This is the rare event where a man can get on stage and write code for ten minutes while thousands of developers watch in stunned silence before erupting in applause. It's where Apple talks about everything it's bringing to customers, and to developers — the deeply nerdy and the user-friendly, all in one two-hour event.

Rumors were flying about all sorts of hardware that might be announced at WWDC, but this was a software-focused show. OS X 10.10 Yosemite and iOS 8 bring the desktop and mobile device closer together than they’ve ever been before, and a host of new developer tools should enable the creation of some powerful new apps. That includes a new programming language, Swift, which Apple hopes will replace Objective-C over time.

Here are all the highlights from today’s event:

Apple’s new operating system will be out in its final form for free this fall. But early adopters will be able to get a look at all the new features through a public beta this summer.

The latest version of OS X includes a total visual overhaul inspired by its mobile cousin, iOS. The flat design, translucent panels, and absence of gradients and textures can be found throughout OS X 10.10, lending a much more modern look to the desktop operating system.

Yosemite gives the Notification Center sidebar introduced in Mountain Lion an even more dramatic visual makeover, turning the background translucent and expanding the features to make it look and function more like it does in iOS. A "Today" view has been added to the new Notification Center, letting you see your upcoming calendar events, reminders, and the weather forecast. Finally, you can now customize the Notification Center by adding third-party widgets and apps from the Mac App Store.

Spotlight gets its first big update in years with a brand-new Alfred-esque launcher and a search field that appears in the middle of the screen. You can quickly launch apps by typing just the first few letters, browse local documents (complete with in-line preview), and search everything from Wikipedia and Apple Maps to contacts and events, all from within the new tool.

Apple has given its Safari web browser some radical visual and functional tweaks, first and foremost shortening the address bar at the top of the browser window and centering it. The address bar has also gotten smarter and can suggest relevant Wikipedia articles based on what you type in. Apple has given Safari a "share" button identical to that found in iOS, along with a menu that displays recent recipients. Apple is also attempting to mitigate one of its browser’s most annoying features — multiple tabs that extend beyond the browser window and out of view — by letting you scroll through them horizontally. But the most dramatic new feature is Tab View, a button that provides you a "bird’s eye" view of all the open tabs, which closely resembles the multi-tab view in mobile Safari.

Apple promises that its problem-plagued Mail app now includes "reliable syncing." But Apple has upgraded the app with other new features as well, focusing primarily on attachments. Markup is Mail’s new built-in editor for image attachments, completely separate from Preview. It closely resembles the popular app Skitch and includes simple features such as a magnifying glass, text and shape annotations, and drag-to-resize arrows. But Markup is also smart enough to automatically transform your messy scribbles into clean, steady lines. For those emails with attachments that are so big they are rejected by a recipient’s email client, Apple has a new solution: MailDrop, a feature that lets you store attachments up to 5GB in size in iCloud and send recipients a link to download it on their own.

Apple announced iCloud Drive, a Dropbox-esque file system for storing your documents in the cloud. iCloud Drive will make everything you have stored in iCloud accessible through Finder, including your files from iOS apps. You can also add your own folders and tags to iCloud Drive, and everything syncs across your Macs — as well as on iOS and Windows.

Handoff is a new feature of OS X that helps you share work across devices. You can start an email on your phone and your Mac will prompt you to finish it there, for example. Or you can start a document in iWork and your iPad will suggest you continue your work there once you move away from your laptop.

Airdrop between iOS and Mac

You can now use your phone’s cellular connection as a Wi-Fi hotspot more easily. Yosemite will automatically find your phone and allow you to start using the connection with a couple of clicks.

SMS and phone calls on all your devices

Yosemite enhances iMessage to include SMS messages as well as the texts sent through Apple’s proprietary service. You can also now send and receive phone calls from your Mac.

Taking a clear cue from Android, Apple now lets you respond directly to messages from the Notifications view and lock screen, no longer forcing you to go into the full Messages app. The useful functionality expands beyond Apple’s own apps, letting you "Like" Facebook posts or bid on eBay items directly from Notifications and the lock screen, as well. Apple lets you add third-party widgets to the Notification Center now, too, such as sports scores or eBay auction updates, and gives you the opportunity to interact with these widgets without launching the full apps.

Spotlight’s search powers have been drastically expanded beyond the apps and contacts you already have on your iOS device. It will now show you everything from movies and songs available on iTunes (with corresponding ratings), to movie showtimes at nearby theaters, to Wikipedia articles and Maps entries.

Keyboards get powered up

Apple’s new predictive keyboard provides you with smarter auto-complete suggestions, giving you a choice of several words and phrases based on the context of the text you or your contacts just wrote, as well as on your full typing history. The new feature, called QuickType, can even answer questions for you. Apple says it does this by "learning" your typing habits and does so while respecting your privacy. Finally bowing to years of requests, Apple now lets you install and use third-party keyboards by default across your iOS devices.

Messages gets audio and video chat

Messages is the most-used app on iOS, and it’s getting an appropriately huge update in iOS 8. The updated app allows for quick audio and video messages, self-destructing messages, and temporary location sharing, among other features. It’s also getting a much-requested feature: the ability to remove people, including yourself, from busy group-message threads.

iCloud Drive is fully integrated into iOS 8, allowing you to open documents from one app inside another compatible app. You’ll also be able to access files from your Mac that have been saved and synced through iCloud.

iOS 8 includes HealthKit, an app for tracking personal health and fitness data. HealthKit provides an easy-to-access hub where iPhone owners can monitor important health metrics on a daily basis, and also step back to examine their fitness trends over a longer period of time. HealthKit will integrate with third-party apps and institutions including Nike and the Mayo Clinic.

Family Sharing is a new feature that will let up to six members of a family share iTunes purchases across devices, as long as each account is linked to the same credit card. Family Sharing also enables the sharing of calendars, reminders, photos, and Find My Friends locations across devices. And it lets parents approve or deny purchases made on their childrens' devices, making it more difficult for kids to run up large bills from in-app purchases.

Apple is finally trying to free your photos from their silos inside each device you own. The new Photos app in iOS 8 lets you view and edit images across your various iPhones and iPads, preserving the latest edits from one device to the other. The photos are stored in your iCloud account, and Apple gives you 5 GB free of charge to start. But beyond that, you will have to subscribe for access: 20 GB for 99 cents per month, 200 GB for $3.99 per month. Apple said it would provide up to a terabyte of storage at even higher cost. Unfortunately, the same functionality won’t make its way to the desktop until at least 2015.

iOS 8 also taught Siri some new tricks. Shazam integration will let Siri ID any song in earshot, and it can dim your lights or turn up your thermostat through the new smart home framework. There are backend changes too, like streaming voice recognition and improved language support, but the big news is that you’ll be able to call up the program without even touching your phone. Just say the words "Hey, Siri" and it’ll appear automatically, similar to "OK, Google" in Chrome.

Today’s news for developers was surprisingly compelling, thanks to a brand-new programming language, a move into the smart home, and new tools for letting apps interact with one another on iOS.

In perhaps the biggest surprise of the day, Apple announced the creation of a new programming language: Swift. Said to be significantly faster than Objective-C, Swift represents the future of development across iOS and OS X. To enable developers to keep working on their existing apps, Swift code can live right besides C and Objective-C code in the same app.

Long requested, Apple is finally catching up to Android and Windows Phone and giving apps on your iPhone and iPad the ability to talk to one another. This is no small feat, as up until now, iOS apps have been "sandboxed," or effectively cut off from one another, which meant that moving your files and information between apps on the same device was cumbersome at best. Now with extensions, Apple will let third-party apps share the information you choose. So if you want to apply a VSCO Cam photo filter to a photo you just took, you can do it directly within the main Photos app, instead of opening VSCO Cam separately. Apple is also introducing widgets for Notification Center, letting you pin apps like eBay and Pinterest directly on the Notifications View instead of having to open those apps separately. This makes Notification Center far more useful, providing you a lot more information that you want at a glance.

Let your iPhone control your home

HomeKit will allow iPhones to start controlling smart devices, such as garage-door openers, lights, and security cameras. It all can be controllable through Siri: say, "Get ready for bed," and your home could automatically dim its lights and lock its doors. Apple will run a certification program for HomeKit; initial partners include August, which is known for its beautiful smart lock; Honeywell; iHome; TI; and about a dozen more.