At WWDC 2014, Apple announced iCloud Drive, a Dropbox-like file system for storing your documents in the cloud. Each app you use with iCloud Drive gets its own folder inside the interface, which you can access through Finder. Files are synced across OS X, iOS, and Windows. Even if you don't use any iCloud-enabled apps, however, you can just drop files and folders into iCloud Drive to sync them across your devices.

Accessing these files on other devices isn't as simple as it is on Mac, however. iCloud Drive adds a Finder-esque file browser to iOS for the first time, which is valuable, but Apple doesn't offer an iCloud Drive app for iOS. In order to find files you've stored in iCloud Drive, you'll need to open an app that uses iCloud Drive storage. But, at least now there's one place to store documents, photos, and files that's agnostic of which apps you're using.

Steve Jobs once vowed to destroy Dropbox with iCloud. That didn't happen. Now, a few years later, Apple has finally launched its true Dropbox-killer. However, back in the age of Jobs, cloud syncing apps weren't nearly as much of a commodity as they are today. Apple fans will love iCloud Drive for syncing files between their Apple devices, but Apple likely won't convince Dropbox and Google Drive-faithful from switching. Apple hasn't proven itself to be very reliable in the cloud syncing space — but its prices are now finally on par with competitors. Apple will now provide 20 GB of storage for $0.99 per month, 200 GB for $3.99 per month, and prices yet to be determined for storage tiers up to 1 TB. 5 GB comes free with an iCloud account.

Also, while iCloud Drive works on Windows, it remains to be seen if Apple will open up APIs so mobile developers on Android and / or Windows Phone can adopt the storage platform. 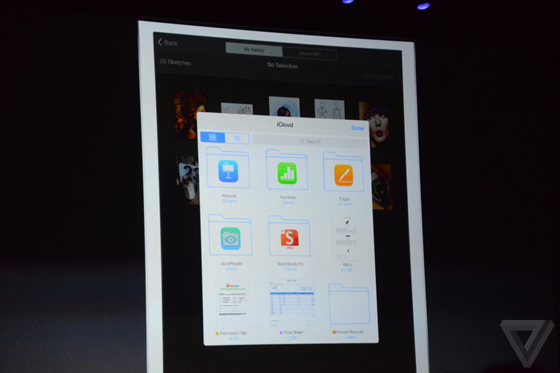 Until today, it had been a pretty quiet year for iCloud. In October, Apple killed off local syncing inside iTunes, leaving users to pick iCloud or another cloud services company like Google for contacts, calendars, and email. In September, Apple's cloud storage and syncing solution saw an iOS 7-style redesign, and in August, Apple rolled out iWork for iCloud, an online collaboration platform that lets you edit documents with friends in real-time. More importantly, Apple has busy upgrading and tweaking iCloud behind the scenes to address mounting developer complaints about reliability and syncing issues.