Star Wars: Episode VII has added two new cast members, 12 Years a Slave breakout star Lupita Nyong'o and Game of Thrones star Gwendoline Christie. Nyong'o won a well-deserved Academy Award for best supporting actress earlier this year and reports of her potential casting have been floating around since not long after. Christie continues to star in Game of Thrones, where she's shined as the formidable warrior (and fan favorite) Brienne of Tarth. She'll also be appearing in the upcoming Hunger Games sequel, Mockingjay.

"I could not be more excited about Lupita and Gwendoline joining the cast of Episode VII," Lucasfilm president Kathleen Kennedy says in a statement. "It's thrilling to see this extraordinarily talented ensemble taking shape." When the initial Episode VII cast was revealed in April, many noticed that there were few women to be found on the list. Reports suggested that certain roles had yet to be filled, however, and today's announcement suggests that was in fact the case. With two strong actresses, one would imagine that director J.J. Abrams has big plans. Episode VII is currently shooting in Abu Dhabi and is planned for release on December 18, 2015.

READ NEXT: These are the faces of Star Wars: Episode VII 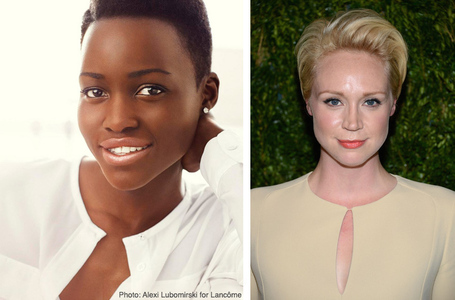