Available in the fall, iOS 8 promises to renovate every aspect of the iPhone

iOS 7 was the biggest overhaul for Apple's iPhone operating system since its inception. Today the company introduces the next version, iOS 8.

The overarching theme for this year is "Continuity" between OS X and iOS devices. With OS X 10.10 Yosemite, Apple is enabling AirDrop file transfers between Macs and iOS devices, but that's just the start of a series of new "Handoff" features that make transitioning between phone and desktop seamless. You can now handle SMS messages and phone calls directly on your computer, and if you see a phone number on a webpage, you just click it and use the Mac as your speakerphone. The new iCloud Drive file-sharing service is also coming to iOS just as it is with OS X.

Widgets are finally coming to iOS with this new version, with third-party apps being allowed to define widgets in the Notification Center. They're still not on the home screen, but they are interactive, with a demo onstage showing how you can bid up an eBay auction straight from the widget.

Health and Family Sharing are the two big new features being introduced today. Health is the mobile app that plugs into Apple's new HealthKit, a comprehensive health-tracking service that can pull in data from third-party fitness apps and can be accessed by healthcare professionals. Family Sharing is more immediately exciting as it's the first time that Apple is allowing the sharing of iTunes purchases, along with the sharing of calendars, group messages, and the like. You also get notifications if a family member wants permission to access a particular app. 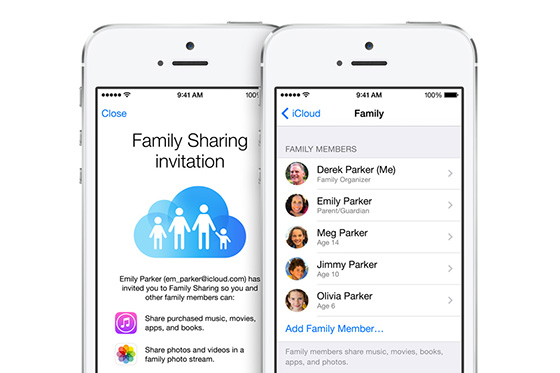 Tim Cook describes iOS 8 as "a huge release" that actually has two stories: one with a ton of new features for end users and the other rich on new capabilities for developers. Starting with the user side of things, you can now respond to incoming messages directly from the notification drop-down, and you no longer need to exit the app you're already in.

Widgets and new interactions are coming to the Notification Center

Notifications can now be actioned directly on the lock screen as well. Craig Federighi demonstrated accepting a calendar invite without having to unlock his phone. Moreover, third-party apps will be supported, with the demo including a Facebook tag that Craig liked with an affirmative tap of the notification.

Double-tapping the home button brings up the familiar task switcher, but it now also includes recent contacts. Spotlight search has also been updated, allowing you to search for apps both on your device and for those you don't already have. Searching through movies, news, Wikipedia entries, and a variety of other sources is included too. Significantly, Spotlight suggestions go straight to Wikipedia, skipping the usual Google search conduit.

Messages is the most-used app on iOS, says Federighi as he details new changes to it. You can now title your threads and manage them much better, including leaving threads you're no longer interested in following. Audio and video messages can also be added, with a quick shortcut in the app allowing you to record them on the fly. Typing hasn't been neglected either, as Apple's adding QuickType, a SwiftKey-like predictive keyboard of its own, and the long-awaited option to install third-party keyboards as well. 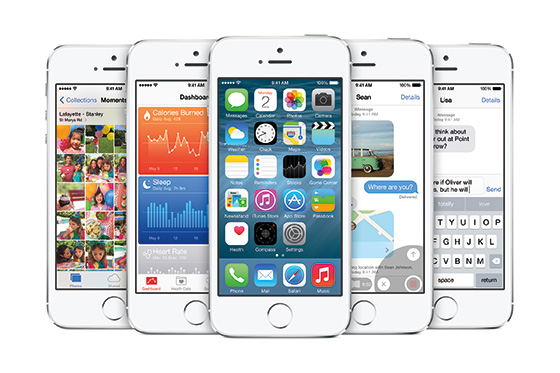 An overhaul of the Photos app now sees images and edits to those images being shared across all devices. Thus, it's now possible to open up an photo taken and initially edited on an iPhone and revert or add to those changes on an iPad.

Touch ID is being opened up to developers and can now be used to unlock third-party apps as well as the iPhone itself. Continuing the theme of security and integration, Apple's also partnering with smart home service providers with its new HomeKit, which will essentially turn the iPhone into a remote control for the home.

Emulating Google Now, Siri in iOS 8 will be accessible with just a voice command of "Hey Siri." The upgraded voice assistant will also integrate Shazam song recognition, allow you to make iTunes purchases, and include 22 new dictation languages. On the iOS App Store, Apple is adding the option to preview apps or to purchase them in discounted bundles. TestFlight is another new feature being touted for developers, allowing them to recruit iOS users as beta testers before an app's final release.

The one last thing in today's presentation was the introduction of a whole new programming language. Drawing excited gasps from the developers in the audience, Apple's Federighi announced Swift, a streamlined new way to code apps for OS X and iOS.

iOS 8 is available to WWDC attendees in beta today and everyone else in the fall. The oldest supported devices will be the iPhone 4S, the fifth-generation iPod touch, and the iPad 2.