From Wi-Fi calling to a new keyboard for the blind, sometimes the best things are hidden

Apple announced iOS 8 with great fanfare today, revealing many new features and a number of significant changes to the platform. Things like HealthKit, new extensibility options, and HomeKit got a lot of attention during Apple's presentation — but as is often the case in Apple's big keynotes, there were a number of new features that didn't even get a mention. Here are eight of the most interesting.

Apple has supported making FaceTime audio and video calls over Wi-Fi networks for some time now, but it looks like iOS 8 will bring the ability to make standard calls over Wi-Fi as well. Carriers such as T-Mobile have offered this service on other smartphones for years, but it's been excluded from the iPhone — until now. In fact, T-Mobile has already confirmed that it will support Wi-Fi calling in iOS 8, though It's likely that this feature will be dependent on carriers, not available universally.

Wi-Fi calling isn't the only new voice-calling feature in iOS 8: it appears that the platform will support call waiting in Apple's FaceTime service, meaning there will be a way to accept or reject incoming FaceTimes while you're already on FaceTime with another user. That's potentially a big deal for those who are using FaceTime on a regular basis, and it also brings FaceTime Audio to closer parity with traditional calling services.

Current versions of iOS let you see how much storage space each app you have installed takes up and how long you've used your phone since its last charge. iOS 8 promises to offer battery usage reporting by app, something that Android users have enjoyed for years. If you suspect that a specific app is killing your battery faster than others, this will be where you go to find out for sure.

This is always my favorite slide pic.twitter.com/GZR5KvnMQy

Android users are used to knowing exactly how long it will take for them to get to an upcoming appointment or destination — or, at the very least, a rough estimate — and it looks like iOS 8 will include a similar feature. It's not entirely clear how this will be implemented; Apple could integrate it with Siri, or more likely, the Notification Center. Either way, it has the potential to be a convenient guide for commuters.

There are two obvious possibilities here: Apple will either be including an app that walks users through tips and tricks for using their iOS device, or phones will include a separate tips app in addition to the standard calculator. Third-party developers have sold tips apps in the iOS App Store for years, but an official app from Apple could benefit from integration with Siri.

Advanced iPhone photographers have used third-party apps for years to independently control focus and exposure when taking pictures, but in iOS 8, you'll be able to do that right in Apple's camera app. Separating the two can result in much better photos when the power is put in the right hands, and being able to do it with the native camera that can be launched from the lock screen is hugely helpful. 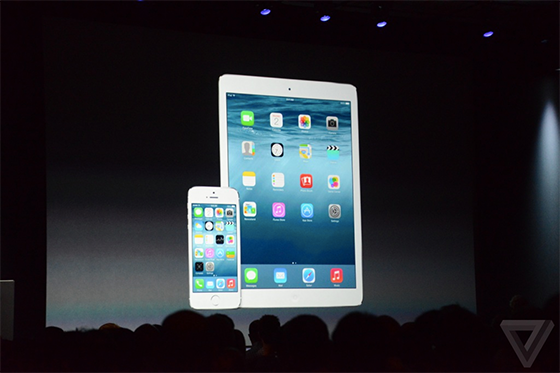 Apple is expanding Safari's search engine options in iOS 8, and it's now including DuckDuckGo, a search startup seen as something of an anti-Google — it doesn't track its users for advertising purposes. DuckDuckGo isn't nearly as well known as Google or Bing, but its inclusion in iOS 8 should expose it to a host of new users.

Finally, iOS 8 will include a Braille keyboard with "direct six dot input." It's not clear at all how exactly this will work, but if it makes it easier for blind users to navigate their smartphones, it could have a huge impact on the lives of many people.

iOS 8 is being released to developers today, and it will be available to the public later this fall. There are certainly more features that will be revealed as we get closer to iOS 8's official release, but it's safe to say that though it isn't as big of a redesign as iOS 7 was, Apple has packed a lot into the new operating system.