The richest man in Vegas has declared war on internet gamblers

Share All sharing options for: The richest man in Vegas has declared war on internet gamblers

The ad opens on two shadows shaking hands in a dark city alley. We see a distraught mother at her laptop, a young child at a computer in a dim bedroom, police cars with sirens. A narrator with a scaly voice comes on. "An established al-Qaeda poker network could extract enough untraceable money from the United States in just a few days to fund several 9/11-sized attacks," he says. "Say no to internet gambling."

The message is clear: internet gambling will fund terrorism and destroy your family.

Players reacted strongly, calling it "ridiculous hysterics" and "distortion at its best." "Get a life, Sheldon!" one commenter wrote.

Sheldon is of course Sheldon Adelson, the 80-year-old billionaire casino owner who has declared war on internet gambling, breaking with the rest of the industry. He’s now pledged to spend "whatever it takes" to fight the spread of online casinos, and no one knows why.

Adelson grew up the son of poor Jewish immigrants in Dorchester, Massachusetts, where he bought the rights to sell newspapers on a popular corner at age 12. He co-founded the influential trade show Comdex — despite having little personal interest in computers — then sold it for more than $860 million in 1995 and got into the casino business. He’s now the 9th-richest person in the world, according to Forbes, with a fortune of around $36 billion.

Adelson has been the biggest single donor to many organizations, including the Israeli Holocaust museum Yad Vashem and the failed presidential campaigns of Newt Gingrich and Mitt Romney. He is passionate and outspoken about politics, but only very specific causes. He once told The Wall Street Journal that a pro-union measure was "one of the two fundamental threats to society." The other was radical Islam.

The billionaire’s denunciation of online gambling is relatively recent. In 2001, Adelson told The Washington Post he thought it was a promising opportunity. In 2003, his company, Las Vegas Sands Corporation, spent $1.3 million exploring the possibility of running an offshore online gambling center in the UK. In August of 2011, it was reported that Adelson was "neutral" on the subject but expected to support a bill legalizing online poker. But when a Justice Department ruling effectively legalized online gambling just four months later, Adelson was fiercely opposed. "It’s a threat to our society," he wrote in an editorial, "a toxin which all good people ought to resist."

Adelson has given several reasons for what Politico called his "internet jihad." At first, he said the technology doesn’t exist to stop kids from playing. Since then, he’s cited the danger of addiction, the possibility of money laundering, the threat to land-based casinos, and the fear that Facebook will come in and "squash" his business.

It’s unclear what Adelson actually believes, but Vegas insiders who spoke to The Verge were skeptical of lines like "my moral standard compels me to speak out" coming from such a shrewd businessman.

One online poker advocate suggests Adelson is trying to take down a rival. "This is a play from Adelson to put the final nail in the coffin of Caesars," he says. "Caesars wants internet gaming very badly."

Others guessed that Adelson’s wife Miriam, a doctor who specializes in teen addiction and drug abuse, "goosed him up a bit" about the issue, in the words of one Vegas lobbyist.

Some think it’s no more complicated than a grudge. "I am told through the grapevine that Isai’s [Scheinberg, the founder of PokerStars] son was invited to do something with Sheldon," the Vegas lobbyist says. "Either he didn’t show up or he showed up late. Purportedly he just had this animus toward poker players ever since then."

Caesars doesn’t compete with Sands in Asia, where Adelson says he makes more than 90 percent of his money, so that explanation seems unlikely. Miriam Adelson certainly influences her husband — she has a habit of kicking him under the table when he lets his mouth run in front of reporters — but based on news reports, she doesn’t say much in public about the issue. The theory that Adelson is driven by a personal feud fits his reputation: he’s reportedly spent more than 15 years going after former Nevada Congresswoman Shelley Berkley, who he believes betrayed him when she served as his corporate lawyer. But The Verge was unable to confirm an Adelson-PokerStars dustup. 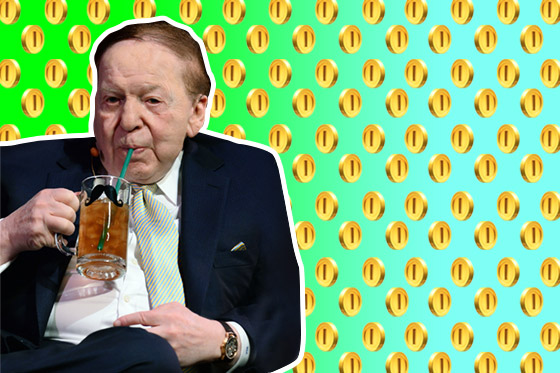 The boom was largely fueled by poker; it was cool, it was social, and the breakout success of a few amateurs like Chris Moneymaker, who went on to win the World Series of Poker, proved there was money to be had. Many of the 1.4 million online poker players in the US turned pro.

But on Friday, April 15, 2011, players discovered that the three largest poker sites — PokerStars, Full Tilt, and Absolute Poker — had disappeared, replaced by an FBI seizure notice. Any money they had in their accounts was frozen.

The poker sites had been operating for years in an iffy legal area. The Wire Act of 1961, which prohibits interstate sports betting over "a wire communication facility," was broadly interpreted to cover all forms of gambling. This was reinforced in 2006 when the Unlawful Internet Gambling Enforcement Act made it a crime to accept payments from "illegal" online gambling operations.

The government used UIGEA to justify its crackdown on online poker. But just eight months after the raid, the Justice Department decided that the Wire Act only applied to sports after all, clearing the way for online gambling to be legalized state by state.

By the end of May, the gambling industry in Vegas had split

Adelson first tried diplomacy: he reportedly sat down with Frank Fahrenkopf, then-CEO of the American Gaming Association (AGA), which supported the legalization of online gambling on a state-by-state basis. Fahrenkopf held his ground, politely saying the AGA would continue to lobby for online gambling.

The billionaire has now built up a network of lobbyists and politicians from Washington, DC, to California. He enlisted the public relations firm Mercury Public Affairs and launched the Coalition to Stop Internet Gambling, which produced "Don’t Let the Games Begin." His lobbyists helped write legislation to ban online gambling with the exception of fantasy sports and horse racing, which was introduced by Senator Lindsey Graham (R-SC) and Representative Jason Chaffetz (R-UT) in March.

By the end of May, the gambling industry in Vegas had split: Adelson was joined by fellow billionaire casino owner Steve Wynn, with Caesars Entertainment, MGM, and Boyd Gaming lined up on the other side.

The AGA dropped its support for online gambling, citing divisiveness. "One of the things I've learned in this industry is we are extraordinarily competent at shooting at one another," current CEO Geoff Freeman told The Wall Street Journal.

Morgan Stanley estimates the US market for online gambling will reach $8 billion by 2020, assuming it’s legalized in more states. That number was revised down from $9.3 billion after lackluster results in New Jersey, which legalized online gambling in November. The state had projected $160 million in tax revenue the first year but has only raised $8 million thanks to software issues and competition from illegal sites.

That kind of money is peanuts to someone like Adelson. "There are multibillion-dollar investment opportunities around the globe for the larger companies like Sands and Wynn," says Mark Lipparelli, a former chairman of the Nevada Gaming Control Board. "They have to question, why would they would invest any amount of energy and time for something that’s either going to be initially loss-generating or potentially modestly profitable?"

But while it may not make sense to walk into a legal minefield for such small profits, online gambling could eventually grow into a market that disrupts Adelson’s business — and now would be the time to head off that threat.

Sheldon’s lobbyist Andy Abboud says his boss isn’t worried about whether the business of online gambling is a good or bad one. "If we wanted to be in it, we could own it," he says.

Abboud has a long list of rote reasons why casinos are "a rite of passage" while online gambling is "stupid public policy." There is no algorithm to test whether a player is drunk, he says, and online games are marketed to youth. When he addresses lawmakers, Abboud’s trademark move is to pull a white phone from his pocket and shake it at them. "It is a vice," he likes to say. "It doesn’t need to be everywhere."

In a year when half the country banks online and 70 percent use Facebook, Adelson’s stated concerns with internet gambling feel a bit anachronistic.

Proponents of digital casinos say their technology can verify identities and detect problem gambling and money laundering even better than traditional casinos. But Adelson and Wynn seem distrustful of technology and uninterested in how it works. Adelson doesn’t text; he says he’s "not an email type of person." Wynn, who is 72, recently saw a demonstration of some of the security checks used by online gambling sites. "I’m sure it was impressive if you were a cyber guy," told Las Vegas journalist Jon Ralston. "But it was bullshit."

"Sheldon’s old, and Steve is virtually blind," one Las Vegas industry insider tells The Verge, referring to Wynn’s degenerative eye condition. "I’ll guarantee you neither of them have ever been on the internet. I don’t think they understand the world that is there at all."

It seems unlikely that Congress will pass a law on internet gambling, either for or against, any time soon — it just isn’t a national priority. Sixty-three percent of Americans say they oppose online gambling, but 65 percent say they don’t follow the issue. "There is a lack of moral outrage regarding internet gaming," says Jeff Ifrah, a Washington, DC-based lawyer who represents poker sites. "That dog doesn’t hunt anymore."

That means the battle falls to the states, many of which are eager for new forms of taxable revenue. By the end of 2013, at least 10 states had seriously considered online gambling legislation and Nevada, Delaware, and New Jersey had passed laws.

Legalization looks most imminent in California, where 13 tribes have reached consensus on an online poker bill. Next is probably Pennsylvania, the second largest casino market in the US, where multiple online gambling bills have been proposed to offset some of the state’s expected $530 million budget shortfall. And just last week, a Canadian gaming company acquired the PokerStars and Full Tilt poker brands with the intention of bringing them back to the US.

Adelson is just beginning to spend money to stop online gambling. Despite his record of failed political donations — he also promised to spend "whatever it takes" to defeat President Barack Obama — the billionaire is indefatigable. And he’s gained real ground, as evidenced by the Graham-Chaffetz bills, the AGA’s reversal, and the fact that politicians he’s recruited are suddenly speaking out against it.

There are signs the billionaire may be losing his laser focus on online gambling, however. He just cut his first check on a new issue: $2.5 million to oppose medical marijuana.