Dave Morin is ready to start talking about Path again.

After a year of keeping quiet and releasing hardly any product updates, the Path CEO is today unveiling the future of the company: a messaging app, an acquisition, and a social network where you can add as many friends as you want. He’s also breaking out numbers about Path usage for the first time in months. The app now has 4 million daily users, Morin says, up from 1.5 million at the beginning of 2014, and handles 10 times more traffic than it did a year ago.

First, Path is releasing a messaging app called Path Talk for iPhone and Android. Path Talk is essentially Path’s messaging feature, stripped out and given its own standalone app. There’s no way to chat inside Path anymore — you’ll need Path Talk for that. Morin decided to break out messaging into its own app because messaging was already Path’s most popular feature. More importantly, Morin felt encumbered by the "Swiss army knife" he felt Path was becoming.

Other companies have tried the same tactic before: Facebook recently broke messaging out of its own primary app and Foursquare recently gave check-ins their own app with Foursquare Swarm. The strategy is becoming increasingly common for social apps in particular, which users expect to be lightning-fast. Messaging in Path was indeed speedy and powerful. Countless other apps from MessageMe to Facebook copied its "checkmark" feature to let you quickly say "okay" with one tap, as well as a location feature that let you send your location to a friend very easily. In the shuffle, Path will lose its messaging component, and will instead bounce users out to Path Talk or prompt them to download it when they receive a message.

Path Talk is not so different from messaging in Path proper, but has a few key additions to set it apart. First, Path Talk messages disappear after 24 hours. Second, Talk incorporates the "ambient location" of friends. Like Foursquare Swarm, Path Talk will show you if a friend is nearby, listed by neighborhood. But, Path Talk takes the idea a step further, displaying details about what you’re doing automatically. If your phone detects movement, it might show that you’re working out, and if it detects that you’re moving very quickly, it will show that you’re in the car so friends might choose not to bother you until later. The app also shows what music you’re listening to, and even if you’re low on battery. 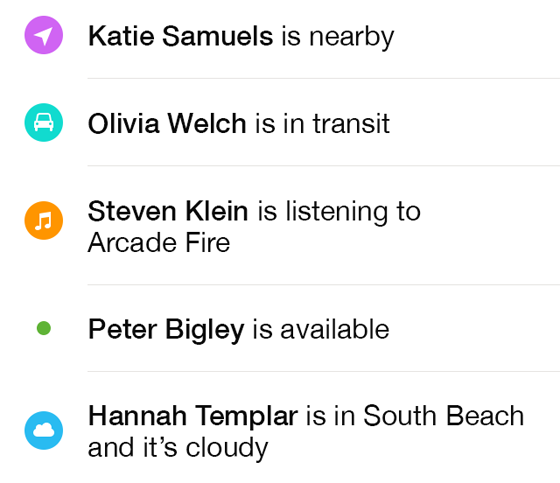 It’s a lot to automatically share, so the feature has been made to be opt-in. Path, which came under fire in the past for collecting users’ address book data without asking for permission, is treading carefully here. Facebook also took precautions with the launch of its ambient location feature Nearby Friends, recently, making that feature opt-in as well. People generally don’t like it when a company they’ve trusted all of a sudden expects them to share a lot more information with their friends list.

Speaking of, another very important element of Path is changing today: the company is lifting its cap on the number of friends you can add. In user studies over the last few quarters, Morin and co. discovered that Path users were on the whole very confused by the company’s trademark policy that users can only have 150 friends. "Users didn’t understand that this was a big part of the app, and they’d have drama with removing people or not letting somebody in," says Morin. "They’d get frustrated and have negative experience." Path began with a 50-user cap on the number friends you could have and later changed it to 150, but clearly, users still weren’t getting the message.

"We’ve failed a lot in terms of implementations we’ve tried, and we finally came down to — well, let’s make it simple."

Path’s choice is one of two things. It’s an admittance that the premise on which Path was originally built — Dunbar’s number, a theory stating that human communities can only be as big as 50 — was wrong. Or it’s a white flag — a statement of defeat that the customer is always right, and that Path’s take on friending is no longer worth pursuing. "It’s extraordinarily hard-to-map [friendships] to software," admits Morin. "We’ve failed a lot in terms of implementations we’ve tried, and we finally came down to — well, let’s make it simple." Either way, today’s announcement finds Path shrugging off its main differentiator from other social apps, and one of the primary marketing tactics it’s used to sell itself over the years. Consequently, Path now feels more like Facebook than it ever has.

With an uncapped friends list and ambient-location features, Path Talk seems quite a lot like Facebook Messenger too, so Path is packing on another feature to differentiate itself. The company is today announcing that it has acquired Boston-based TalkTo for an undisclosed amount of cash and stock. TalkTo lets its users text businesses and get responses in under five minutes, says CEO Stuart Levinson, and will be integrated into Path Talk by the end of the summer. TalkTo works by either calling businesses itself, or by offering businesses the opportunity to respond via email or SMS when customers want to text them.

Being able to text business instead of calling them is indeed a nice feature, but will it feel awkward built into an app for texting your friends? And do we even need one more app for texting friends? Well, perhaps Path isn’t looking to impress us. The company’s largest and fastest-growing user base is in southeast Asia, and the company’s recent funding round was led by an Indonesian venture capital firm. Southeast Asia has traditionally been much more receptive to products like paid stickers and filters, which Path offers.

Integrating TalkTo could also bring a viable new revenue stream to Path, which has until now monetized using premium accounts, sticker packs, and filters. The 3 1/2-year-old TalkTo hasn’t yet monetized its business, but Morin says that getting involved in local commerce could give the company more options for making money. Path also intends to build out its Path Premium service — which for now includes free sticker packs and filters for $14.99 per year — to resemble Evernote Premium or Amazon Prime, Morin says. "A big part of the opportunity is that we can offer TalkTo for free, but if you become an intense user maybe we offer a higher level of service at premium." Path plans to release a handful of other new social apps in the coming months, which will presumably offer free features and paid features as part of Path Premium.

Path’s new direction is a bit uninspired — unbundling large services into apps is one of the big themes of 2014. But, a fresh start could be just what Path needs to get back on the horse after a year of often-bitter ridicule from the tech community and press. Morin himself was often a target, as was the company after it failed to really product updates, laid off 20 percent of its staff, and then raised another $25 million in funding with seemingly no direction in mind. "It hurts, I’m not gonna sugarcoat it," says Morin. "But I’m really proud of everything this team’s accomplished. What we would ask is for people to focus on the work and tell us what they think. Criticism is a big part of the creative process, and we're always listening."

Correction: An earlier version of this article stated that Path Talk's ambient sharing was opt-out, instead of opt-in.