Fish-eating spiders are taking over the world

Fish-eating spiders are taking over the world

Spiders that can catch and consume fish are found in every continent in the world — except Antarctica. That's the main conclusion of a study, published on Wednesday in PLOS ONE, in which researchers identify 18 species of spiders that have been observed catching fish.

Those specimens, reports National Geographic, include the US' six-spotted fishing spiders and the UK's great raft spiders. Marie Herberstein, a spider behavior expert at Macquarie University in Australia, told National Geographic that "fish predation by spiders has always been a bit of an oddity." But the study makes a "compelling argument" that the behavior is widespread — information that she says came as "a surprise." 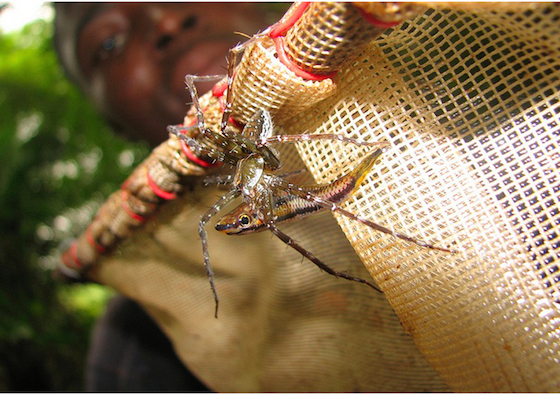 But how do these spiders do it? According to the study's authors, they can "anchor their hind legs to a stone or a plant, with their front legs resting on the surface of the water." And since these arachnids are often "sit-and-wait predators," all a spider has to do is hang around until an unsuspecting fish, or insect, touches its legs from beneath the water. Moreover, their mouths are strong enough to pierce scaly flesh, and they can inject lethal neurotoxins into a fish as they crush it. Then, once the fish is dead, the spider can drag it to a dry spot, and inject it with chemicals that liquefy its insides, making it much easier to consume.

chemicals that liquefy a fish's insides

What's perhaps most compelling, however, is that these spiders are often capable of catching fish that are much larger than they are. The authors think, for example, that the largest fish-eating spider, which weighs in at 0.4 ounces (7 grams), might be able to catch a 1-ounce (30-gram) fish.