Aviate, the Android app that caters your home screen to the time of day and where you are, is finally opening its doors to the world. After several months in beta and being acquired by Yahoo, the app is formally launching today with a revamped look, several new features, and a new name: Yahoo Aviate.

Yahoo Aviate is a lot like the app we tested last October. It shows music apps when you're driving, news and weather apps in the morning, productivity apps while you're at work, and maybe even a Reddit app right before bed. But with the company's acquisition came a new focus on daily habits, and on showing actual content instead of apps. Where the Aviate Beta showed news apps when you first turned on your phone in the morning, Yahoo Aviate shows snippets from Yahoo's News Digest app. And where the Aviate Beta showed calendar apps while you were at work, Yahoo Aviate shows actual calendar entries with one-touch access to dialing a conference call number or getting directions to your next appointment. Lastly, instead of showing calendar apps, Yahoo Aviate now shows forecasts from Yahoo Weather.

Yahoo Aviate's calendar integration comes courtesy Donna, an intelligent calendar app Yahoo acquired back in January. Yahoo Aviate also includes a new way to text or call your close friends and family. Swiping up on your home screen now brings up icons for people that you talk to frequently on the phone or via text message. "We learned in our beta period that 40 percent of app opens were related to communicating with people," says Aviate founder Paul Montoy-Wilson. Thanks to Aviate's newfound resources at Yahoo — the company has grown from seven people to more than 25 since the acquisition — they were able to build out Favorites in just a couple months. 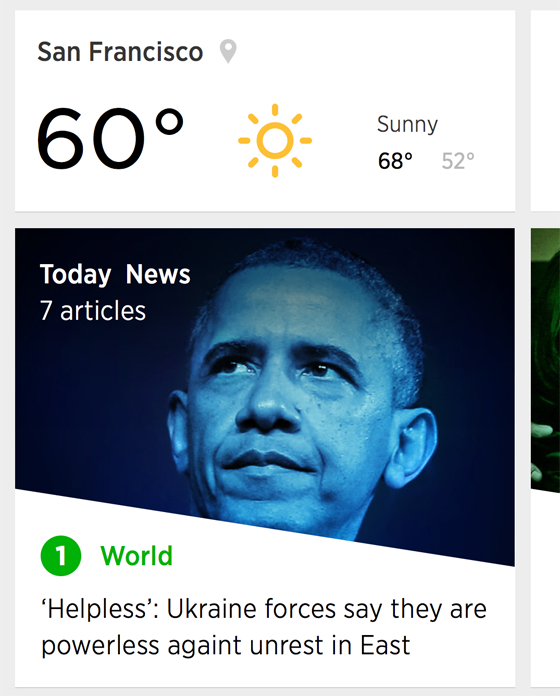 As Yahoo Aviate grows, Montoy-Wilson and co-founder Mark Daiss say that they will choose to integrate content that's best for users, and not just content created by Yahoo. "We knew at Yahoo there would be content we could use from within Yahoo, but Aviate will still put in front of you whatever the best content is for that specific context is," says Daiss. "We will remain very agnostic." The co-founders also say that the cards inside each Aviate context will be customizable. Fortunately, Yahoo News Digest is one of the best ways to read bite-sized chunks of news in the morning, so nobody will argue that choice — for now.

Aviate is one of the best dynamic home screen apps for Android. Today's update brings the app to Android 4.0 devices and above, but expect lots more changes and compatibility updates soon. The company realizes that being as dynamic as its home screens is a must. "When you work on a home screen, the engagement is so good," says Daiss. "Users touch it 50 times per day — there's no interface you touch more in your life."