I've seen the abandoned airport runway in front of me a dozen times, but this is my first time actually being here. I'm in Alameda, a city right across the bay from San Francisco, at the same disused Navy runway where the popular TV show MythBusters often does incredibly dangerous things with cars. Semi trucks have collided here head-on, and passenger vehicles have smashed into concrete barriers or gone careening through the nearby chain link fence. Hopefully none of those things are about to happen to me as I step into the backseat of a car controlled by a computer in the trunk. Did I mention the software isn't finished yet?

Don't call it self-driving yet

This is the first public demo of Cruise, a new technology and business from a Y Combinator startup aptly named Cruise Automation. It's designed as a computer-controlled driving system that can take over when you're behind the wheel. Turn it on like typical cruise control and it will keep the car going, but the added smarts will steer, brake, and avoid objects.

Unlike more expensive and complex technologies like the one Google's shown off recently, Cruise is not a replacement for the driver, nor one that will be capable of getting you from point A to point B on all roads. Instead, it's been designed to exist somewhere between Google's fully automated self-driving car and the cruise control you'd find in your car today. This means it's able to keep within freeway lanes by actually steering, and slow down when it sees obstacles using an array of sensors and radar that are mounted on the top of the car. It just won't be able to take over while you take a nap in the back seat.

"Everything on this car is priced for a consumer product."

"This is a little different than what you've seen from Google, for example, because that's like a $100,000 research car, with tons of fancy sensors," Cruise's CEO Kyle Vogt tells me as the Audi S4 we're in begins its first of two laps around a course that's been set up on the abandoned runway. "Everything on this car is priced for a consumer product. It's, like, very low-cost everything, and the performance is still very good."

Cruise's plan involves a $10,000 kit called the RP-1 that can be installed on just two specific Audi models — a 2012 or newer A4 or S4 — and only be used in California. It's a mix of a custom-designed sensors that are mounted to the top of your car; actuators for the steering wheel, brakes, and accelerator; as well as a computer system that's installed into the trunk that's processing data from the sensors and piping it back to the wheel. Together, with a special button that goes into the center console, the vehicle can be switched between human and computer at a moment's notice.

As we turn on to the course's one and only straightaway, the car speeds up, staying on a mostly straight line on the 15-foot-wide faux roadway. That's 3 feet wider than your standard freeway, where Cruise has been designed to work. Vogt and company have trained the car's telemetry system to do this route, and it will follow it, while making adjustments for obstacles using the roof-mounted sensors.

The goal is to create a network of automated road data

"We have to drive the route once, and sort of map it, and then it can do the route on its own after that," Vogt says. The company's grander plan is to map freeways and share that data between the vehicles, creating a large network of road data that's being constantly updated. Google does a similar thing to provide a real-time view of traffic for those running the mobile version of its Maps app. In Cruise's case, it's also gathering camera images of the road surface, along with GPS and inertial measurements. The goal is to create white-listed areas of freeways where the system knows its way and Cruise can be enabled. Vogt wouldn't get into exact details about how long that mapping process would take, short of saying that it would be a "slow roll-out," and that the system will at least have the Bay Area's major freeways mapped from the get-go. 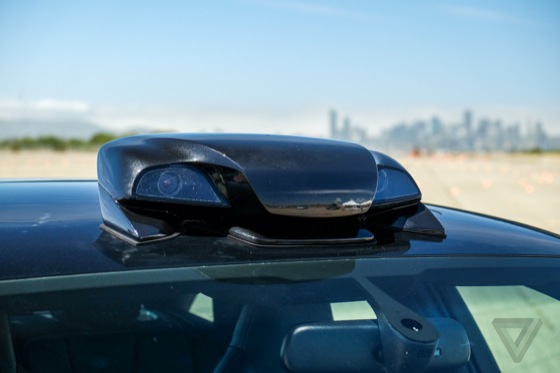 Cruise is just one of many companies working on automation technology, including major car manufacturers. BMW, for instance, showed off its self-driving technology at CES in January, noting that its systems had a ways to go before it could handle the wide variety of situations that happen when driving. Others like Ford, Audi, Nissan, Mercedes-Benz, and Tesla are also working on projects that aim to remove the need for human interaction when driving. These technologies are going hand in hand with existing computer-assisted vehicle technologies that automatically apply the brakes when they sense drivers getting too close to other cars, or that will do audio and visual alerts when a car is drifting into another lane or off the road.

The benefits for such technologies go far beyond convenience. 33,000 Americans die from auto accidents each year, with 1.2 million dying worldwide. Like Google, Cruise believes it can trim those figures by as much as 90 percent using a technology that can sense and react to things faster than humans. However, for the sake of the road test we saw, there were no surprises, like pedestrians or other cars, to show those safety features off.

Vogt's track record is one of the things that makes this project particularly interesting. Up until now, he's been involved mainly with projects that involved ways for people to share and broadcast video to friends or the internet at large. In 2011, he founded Socialcam, which he sold to Autodesk for $60 million a year later. He was also a founder for both Justin.tv and Twitch, the latter of which Google could soon be purchasing for more than $1 billion. Vogt said his interest in cars stems both from a joy of driving and an interest in automating parts of it using technology.

Still plenty of work yet to be done

Of course the big question is how ready the technology will be when the rubber quite literally hits the road. There's also the matter of who will lay out the $10,000 for the system — as much as 29 percent the cost of an Audi A4 itself. Vogt says there's still months of work, including third-party testing, still to be done before the company feels comfortable handing it over to customers. As part of the presale, the company is limiting it to just 50 orders (with a waitlist after that), and only to those in California where rules governing autonomous cars are set to change as part of a state Senate bill that was signed into law two years ago, and that goes into effect in the fall. 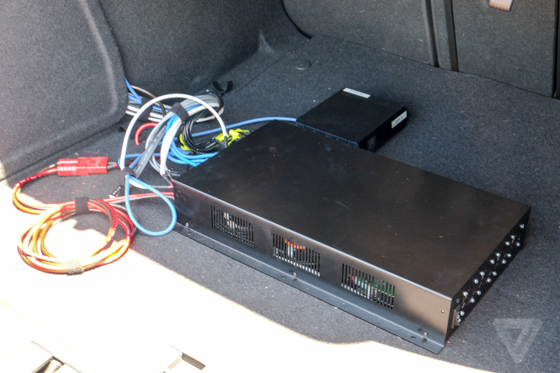 Autonomous driving is still in its infancy, and with Cruise, it shows. The system doesn't work in the rain, the fog, or in the dark (some issues that affect Google's project, too), and Cruise's current mounting system requires bolting the hardware through the top of the vehicle, which you'll need to patch if and when it's removed. To Cruise's credit, the module that goes on the top has been designed to match the look and aesthetic of the car, right down to the paint color, and it doesn't obscure the moonroof. The same cannot be said for the computer that goes in the back of the car, which is large and boxy. Over time the hardware is expected to get smaller and less expensive, but that won't be the case initially.

In a lot of ways, that unfinished nature is Cruise in a nutshell. What you see right now is a work in progress, and early adopters might be better described as beta testers. Vogt's taking the same startup approach that's worked well for the video technologies he's worked on and is trying to adapt it to our cars. "Our focus is to get a simple version of this product in people's hands quickly and slowly build on that," he says. And while the end goal is to buzz down a busy California freeway while your hands rest comfortably off the wheel, Cruise makes that reality seems a long ways off — but also one worth looking forward to.

Chris Schodt contributed to this report.

More from this stream Self-driving cars: Google and others map the road to automated vehicles