Soundhawk's earpiece lets you pick exactly what you want to hear

Soundhawk's earpiece lets you pick exactly what you want to hear

Would you wear a hearing aid if you didn't really need one? Say you could hear perfectly — or at least very well — and there was something that could dramatically and selectively improve your hearing in noisy places, like a crowded bar or restaurant. Would you do it then?

That's the premise of Soundhawk, a $299 "smart listening system" designed by a group of former hardware and software engineers from Palm, Apple, and Amazon. For the past two years, the company's been working on an in-ear headset that will let you pick what you want to hear using a smartphone app that can draw out certain sounds. They also think they've designed something that you'll want to have in your ear at all times, and that won't get you strange looks.

The small headset is called the Scoop. It plugs into your ear, and has two microphones and just one button. It connects to your iPhone or Android phone over Bluetooth 2.1, and can be used for normal wireless-headset tasks like taking calls and firing up Siri or Google Now. But the real trick is when you launch the mobile app, it lets you pick what you want to hear, something the company hopes people will be willing to pay as much for as a high-end smartphone.

"This was inspired by ophthalmologists, and watching them test people for eyewear," says Mike Kisch, Soundhawk's president and CEO. "The one thing they change is putting different lenses in front of people to test for vision, and that's not objective, it's subjective. We do the exact same thing with sound." 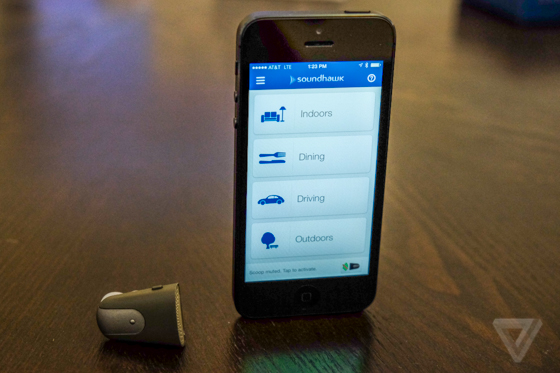 All told, there are four audio presets that Soundhawk believes are the most common: indoors, outdoors, dining, and driving. Each uses an algorithm and specific parts of the Scoop hardware to pull out and highlight sound channels while suppressing others. One example of that: if you pick the dining mode, it will limit the width sound the Scoop picks up to get your table mates. Each preset can also be manually adjusted on a virtual sound field where you point or drag your finger to a particular quadrant. Go higher, and it'll boost the volume, go lower and it enhances it less. Going left enhances the lows, and going right picks up the highs. The idea is to fiddle as necessary, then put your phone away and live life.

"I would guess that the vast majority will do baseline tuning, and a little bit of changes on a daily basis, then let the device take over." Kisch says. "What we have found is that people a little more techie and a little more interested in the mechanics of it, get crazy about constant fine tuning. We wanted to offer that without forcing it on the people who want simpler experiences."

Soundhawk is the creation of Stanford otologist Dr. Rodney Perkins. Dr. Perkins founded ReSound, one of the largest hearing aid companies. According to Kisch, Perkins had the idea for the sound-tuning element (something ReSound's able to do to some degree) a decade ago, but smartphones weren't in as many pockets and purses as they are now.

This isn't technically a hearing aid

This new product avoids competing with hearing aids (and treading on ReSound) because it's not a replacement for one, Kisch says. "We've got a lot of hearing aid science, but we're not a hearing aid company," he argues. That would require approval from and regulation by the US Food and Drug Administration. It's gotten around that by using an avenue the FDA opened up for companies like Soundhawk five years ago, saying that personal hearing devices could be developed and sold to the public as long as you weren't claiming to diagnose, treat, or cure an underlying medical condition. Kitsch reiterated that the company's angle was very rigidly within those guidelines.

"People who have hearing loss typically have it in both ears, and there's a rehab process. There's also a whole channel of audiologists," he says. "Those people should stay with that."

The Scoop and app are just one part of the equation. The Soundhawk also includes a remote microphone that links up over Bluetooth. You can put this on a table, in front of a TV speaker, or even attach it with the built-in clip to someone you want to hear — as long as they stay within the 33-foot range. The idea is to extend beyond what the Scoop is able to pick up, even though you're still using it.

I was able to test that out in a brief demo with a production version of the Scoop and microphone with marked success. Loud chatter recorded from a restaurant was pumped through surround sound speakers, and Ted Simonides, Soundhawk's VP of product management, spoke in dulcet tones to me from across the room. He was whispering at such a level that I wouldn't be able to make him out normally, but with the earpiece it was like he was right next to me. Even so, the system takes some getting used to since you're hearing the entirety of everything else through your other ear.

The company envisions people bringing the microphone with them to dinners and casually sticking it in front of someone, or actually sticking the device on another person using the built-in clip. In the future, the company could also create and sell stationary microphones that could be stuck on tables in your house. 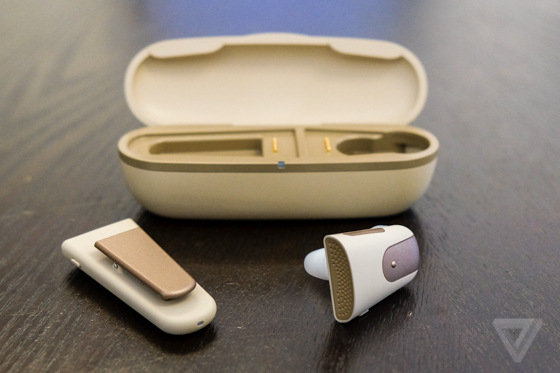 If hearing aids have a social stigma, Bluetooth headsets have quite another. Kisch says he thinks Soundhawk's design keeps it from being misconstrued with either camp. "If it's behind the ear, it looks like a hearing aid, and if it's a boom mic, it's a Bluetooth headset," Kisch says. After 35 iterations of the design, the team landed on something that's neither. The end result is centered on your ear, but that doesn't stick out of the ear very far in any direction.

As it turns out, the size of the headset is a very big deal, not just for battery life, but also for performance. During development, the engineering group discovered that by extending the length of the earpiece by just 0.3 millimeters, they were able to extend its overall performance three to four times. Soundhawk is also using Bluetooth 2.1 instead of the newer and lower-power 4.0, since it gives the product better sound quality and signal strength.

Size is everything, but so is a real need for this

The details filter into other parts of the product too, like the box people carry the two microphones in, which doubles as a portable recharging station. The Scoop gets eight hours of battery life, but can be recharged twice over with the case. It also gives the microphone, which gets three hours of battery life, an extra charge. Those numbers change when both the Scoop and microphone are used together, which will give you three hours from the pair, with an additional charge from the box that results in another three hours of use. Simonides says people can expect to go about five days between having to recharge the whole kit.

Still, even with a very well thought out design and an eye toward people not wanting to frequently recharge yet another gadget, Soundhawk still faces the very real challenge of convincing people who can hear that they would need this in daily life. While the restaurant and bar examples are easy to grok — as are all the normal places you'd use a Bluetooth headset — there's still the question of when else this product can truly improve life versus when it gets in the way. To that, Kisch says the product that's shipping later this summer will continue to evolve long after people buy it thanks to software updates. He also argues there's a very real potential for Soundhawk to improve how people communicate with one another.

"We're enhancing people's communications with other people. We see that only as a positive."