Prince is apparently getting his musical inspiration from Twitter, Tumblr, and Reddit. Speaking to The Minnesota Star Tribune, Prince said that "This Could Be Us," a track from a newly announced solo album, was named in reference to the #ThisCouldBeUsButYouPlayin meme. Prince explained that he was inspired by a widely retweeted image taken from his 1984 film Purple Rain, showing him and co-star Apollonia Kotero on a motorcycle, with the words "This could be us... but you playin" emblazoned above and below their faces. 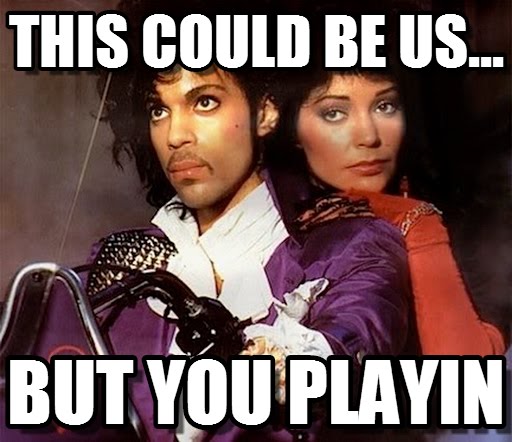 The meme, supposedly born from Manio's 2012 song "This Could Be Us," has become popular across social networks after its first reported use in January of this year. The picture Prince references is one of the more straight-faced appropriations of the meme, with other examples showing couples flashing ankle-worn tracking bracelets, and men proudly displaying giant root vegetables.

The song is reportedly a "joyful ballad," laid over with Prince's "ecstatic" vocals. The singer has had difficulties with record labels in the past, but his new album, along with a remastered 30th anniversary version of Purple Rain, will be released on Warner Bros. Records. He had previously announced that he would be releasing an album with his band 3rd Eye Girl, called Plectrum Electrum, but his solo album is yet to be named. Neither has a release date yet.

Prince has previously shown hostility toward the internet in general, calling it "completely over" in an interview in 2010, and lobbying aggressively to sue pirates of his music. But while he professes to hate the internet, the star joined Twitter last year, and this new meme-centric song isn't the first time Prince has shown that he is very capable of exploiting his persona and mythos online. "Breakfast Can Wait," released by Prince and his band 3rd Eye Girl in August of 2013, makes reference to a sketch by comedian Dave Chappelle. In the sketch, Prince — played by Chappelle — invites Eddie and Charlie Murphy back to his house, before beating them at basketball and serving them breakfast. The single's cover, tweeted along with the words "Game: Blouses," shows Chappelle in full Prince regalia, holding a plate of pancakes.