This machine creates flexible 3D structures out of wool and paper

This machine creates flexible 3D structures out of wool and paper

As 3D printing inches its way ever closer to the mainstream, industrial designer Oluwaseyi Sosanya has come up with a unique alternative: a machine that can weave fabric into three dimensional shapes. A graduate student from the Royal College of Art, Sosanya's concept weaves together layers of material at different heights, to create 3D shapes, like a honeycomb pattern. Once the design is woven it can then be dipped in silicone to make it stronger.

"Auxetic structures were a big influence."

The resulting creations are both flexible and strong, and Sosanya has provided an example of a real world application by creating soles for a pair of shoes. The soles were made using a combination of cotton, paper, and wool, and consist of one continuous thread. And the resemblance to a honeycomb is no accident, as the designer says he took much of his inspiration from nature. "Auxetic structures were a big influence," he says. 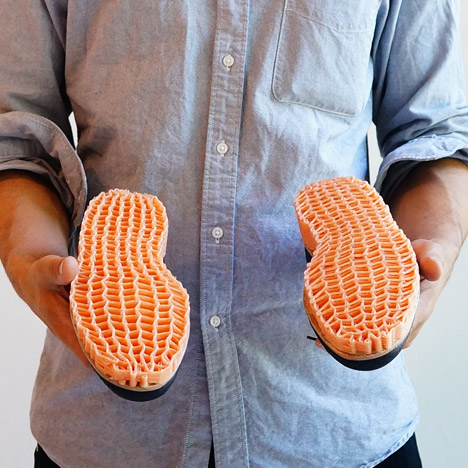 While the shoes are just one example, Sosanya believes that the process could have applications in everything from medical implants to air purification and much more. "I am developing more technical materials for helmets and stab proof vests," he told Dezeen. "I am currently working on a material that I hope will address several of the issues caused by body shape that surround stab resistant vests worn by female British law enforcement officers." The machine is currently on display at a Royal College of Art showcase in London until the end of the month, but there's no word on when or if it might be available commercially.