During a keynote address to kick off its annual Google I/O developer conference, Google provided more details about its forthcoming wearable technology platform, Android Wear. The company initially announced Android Wear in March of this year, describing it as a "project that extends Android to wearables." Today, the company demoed the platform on an LG G Watch, demonstrating a number of its features on stage.

The G Watch (and likely all Android Wear devices) has an always on display that switches from black and white to full color when a user interacts with it. Notifications pushed from a paired phone to the watch can be dismissed right from your wrist, and certain notifications even have actions available in Android Wear. Users can perform voice searches right from the watch, with results showing up on the device's color display. Like with other smartwatches, Android Wear users can also control music playback from their wrists. Most Android Wear devices also include built-in step counters, while some also feature heart rate monitors. 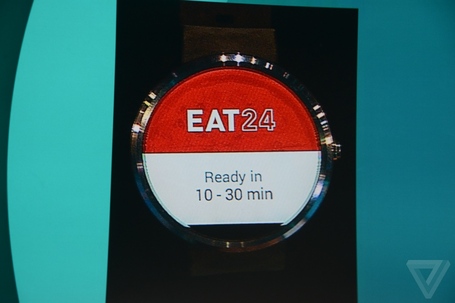 Android Wear really becomes powerful with third-party apps. Users can install apps on Wear devices via their Android smartphones, and the apps will update on their watches automatically. Google demoed an Eat24 app that lets you order a pizza from your watch, as well as a Lyft app that lets you call up a ride without ever touching your smartphone. Android Wear also integrates with Google's new Android Auto and Android TV platforms for controls and vocie commands.

The first devices to run Android Wear are LG's G Watch and Samsung's Gear Live, both of which are available to order today. Google says that Motorola's long-awaited Moto 360 won't be available until later this summer. Developers, which have had access to a preview developer kit since March, will be able to download the full Android Wear developer tools today.