Google's biggest event of the year, Google I/O in San Francisco, was interrupted twice today by two protesters with very different messages. One protester, an unidentified man (seen above), stood up in the audience late into Google's keynote speech during a discussion of the company's cloud platform and began yelling about killer robots. "You all work for a totalitarian company that builds machines that kill people!" the man shouted, pointing his finger at the stage where Google's senior VP of technical infrastructure Urs Hölze was speaking. "You know that's true," the protester added, before being escorted out of the Moscone Center venue by security. 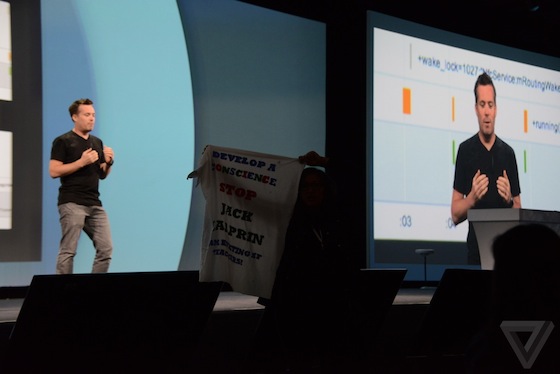 Earlier, another woman protester whose identity has yet to be confirmed began shouting in the middle of Android engineering director Dave Burke's talk. She held up a T-shirt that read "develop a conscience, stop Jack Halprin," as seen in the photos above and below. It doesn't appear at this time that the protests were directly related

Halprin, a Google attorney who wasn't onstage at the time, has been the target of protesters before. In April, demonstrators assembled outside Halprin's seven-unit home in San Francisco's trendy Mission neighborhood, protesting his alleged eviction of all other six tenants from the property. At least two of the tenants said they were local teachers in San Francisco, as the SF Examiner reported at the time. 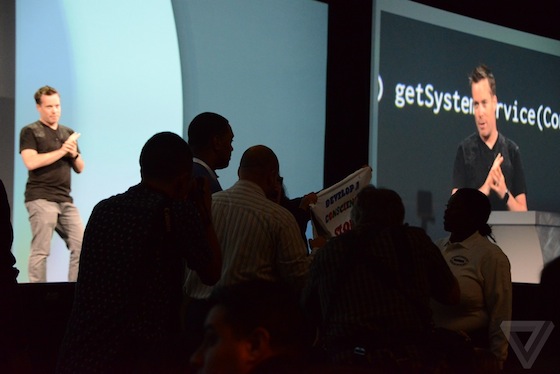 At I/O today, Halprin's protester was quickly escorted out by security, and Burke seemed mostly unfazed by the disturbance. He later joked about the incident, saying the new Android version L's battery-saving feature would be good for the protester: "Maybe you're taking a long hike, or maybe a long protest."

Update June 25th, 3:54PM: A Google spokesperson did not comment specifically on the actions of the protestors, but offered the following statement:

Thousands of Googlers call the Bay Area home, and we want to be good neighbors. Since 2011 we've given more than $70 million to local projects and employees have volunteered thousands of hours in the community. We're excited to be expanding that work in 2014 with the recent Bay Area Impact Challenge winners--several of them have even joined us at I/O.