Google finally has a true Office competitor for mobile

With the release of Slides and QuickOffice integration, Google's office suite is finally complete

Share All sharing options for: Google finally has a true Office competitor for mobile

Today at its annual Google I/O conference, the company finally found a way to make its mobile office solution sensible. It announced several pieces of the Office puzzle that finally make its productivity suite something that's comprensible to the average consumer and a legitimate competitor to Microsoft's Office suite on mobile.

The first is that Google's presentation software, Slides, is now available on mobile. It will be available today on Android and will also come on iOS once it receives App Store approval. Like Docs and Sheets, it's a standalone app that sits apart from Google Drive, which is mostly focused on storage now — though all four apps are still tightly integrated. More importantly, Google has finally made it so those apps can handle Microsoft Word, Excel, and Powerpoint files natively without conversion. Previously, users were forced to resort to yet another app, QuickOffice, which the company acquired in 2012. 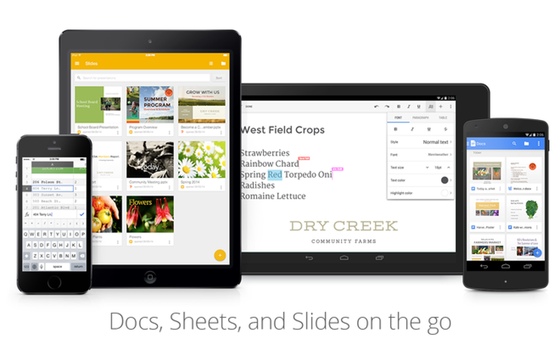 Google has long offered access to Google Docs and Google Sheets on mobile, but it's done so via a succession of increasingly confusing options — which included a switch from a Google Docs app to a Google Drive app, and more recently releases of separate Docs and Sheets apps. Now, the company has simplified and streamlined its office suite. Breaking out the apps into distinct and immediately obvious icons makes sense, says Ryan Tabone, director of product management, Google Docs, Sheets, Slides & Quickoffice. "You just think document, use Docs. You think spreadsheet, use Sheets," says Tabone, "When people use one application, they have one use case in mind."

The QuickOffice brand will be folded into the three core apps, which are finally able to directly edit Microsoft Office docs without requiring conversion. Users will be able to save them directly or store them in Google drive.

Google's office suite, both on web and on mobile, has never been as feature-rich as Microsoft's offering — but Google would rather focus on simplicity. "If you ask someone 'Oh, do you want some feature?', the answer's always going to be yes," Tabone says. But his strategy is to try to think more about user problems than feature parity.

The other strategy is for Google to extend its lead on the one feature it innovated in productivity apps: real-time collaborative editing. To that end it's adding a new feature to Google Docs that makes it easier for multiple people to edit the same document. Instead of merely commenting on a piece of prose, multiple people can simply change it direction and the document will use Google Docs' comment system to track the changes. Different editors will have their changes appear in different colors, and the author can accept or reject those changes as they like.

It's not too different from Microsoft Word's "Track changes" feature, except that it feels both more immediate and more intuitive. For people who live in Google Docs day after day, it will be a welcome change. Google will also smarten up its offline Docs feature to automatically save some documents locally for when you don't have Wi-Fi access.

"At the end of the day, people just want to edit documents." Tabone says. "They shouldn't have to be rocket scientists to figure this out."