Evictions and killer robots are two sides of the same coin

by Lessley Anderson and Josh Lowensohn

Google I/O is one of the hottest tickets in town, and gaining entry to today's keynote and the rest of the sessions that are going on this week is no small feat. Yet that didn't stop two protesters, who began screaming out their complaints against company officials at different times during the 2.5-hour long keynote before being dragged away by security. Both protesters were part of local tenants' rights activist groups, Eviction Free San Francisco and the Anti Eviction Mapping Project.

The first protester to stand up was Claudia Tirado, a third grade teacher at San Francisco's Fairmount Elementary School, who currently faces eviction from her home in the Mission District — just minutes away from where Google's press conference took place. Tirado rose suddenly in the middle of a presentation by Google's Android engineering director David Burke, who somehow managed to keep going on as if nothing was happening.

"You need to develop a conscience, Google," Tirado yelled while holding up a T-shirt urging people to stop Google's lawyer Jack Halprin. Halprin owns the seven-unit Victorian building where Tirado and her family live, and is reportedly trying to evict them using a controversial piece of California legislation called the Ellis Act to take the entire building off the rental market and evict rent-controlled tenants. The other protester let loose on Google for what he called "machines that kill people," a reference to the company's acquisition of robotic engineering company Boston Dynamics last December.

Erin McElroy, one of the protest's organizers, told The Verge that Tirado got into the show by receiving a pass donated by a sympathetic attendee. The conference cost $900 to attend, though tickets were extremely limited, causing Google only to offer them as part of a lottery system to interested developers. She stood in line to get in, took her seat, then jumped in front during the demonstration of the new version of Android, walking right past security guards, she says. After making her point, Tirado was escorted out by security guards, interviewed by Google VP of communications Rachel Whetstone, then released.

"I was scared before I did it, and didn't know what I was going to do," says Tirado. "But I'm really happy about how it came out."

"One of our demands of Google is to make Jack Halprin rescind the eviction," says McElroy, whose groups Eviction Free San Francisco and the Anti Eviction Mapping Project were responsible for organizing these protests, and others that have taken place in San Francisco over the past few months.

Activists view the eviction as a prime example of the broader problems caused by San Francisco's recent tech boom. An average rental in the city now costs $3,200, meaning that lower- and middle-income residents who are forced into the rental market often have to leave the city. That change has spread out to surrounding areas like Oakland, where median home prices have nearly doubled in the past two years.

When asked whether she believed Google had a legal right to intervene in its employees' personal lives in this manner, McElroy responded, "We're asking for Google to take a stand on the eviction crisis and acknowledge that its employees are directly responsible for the displacement we're seeing." Tirado says she has until February 26th to remain in her apartment, and says she can't afford to stick around if the eviction goes through. 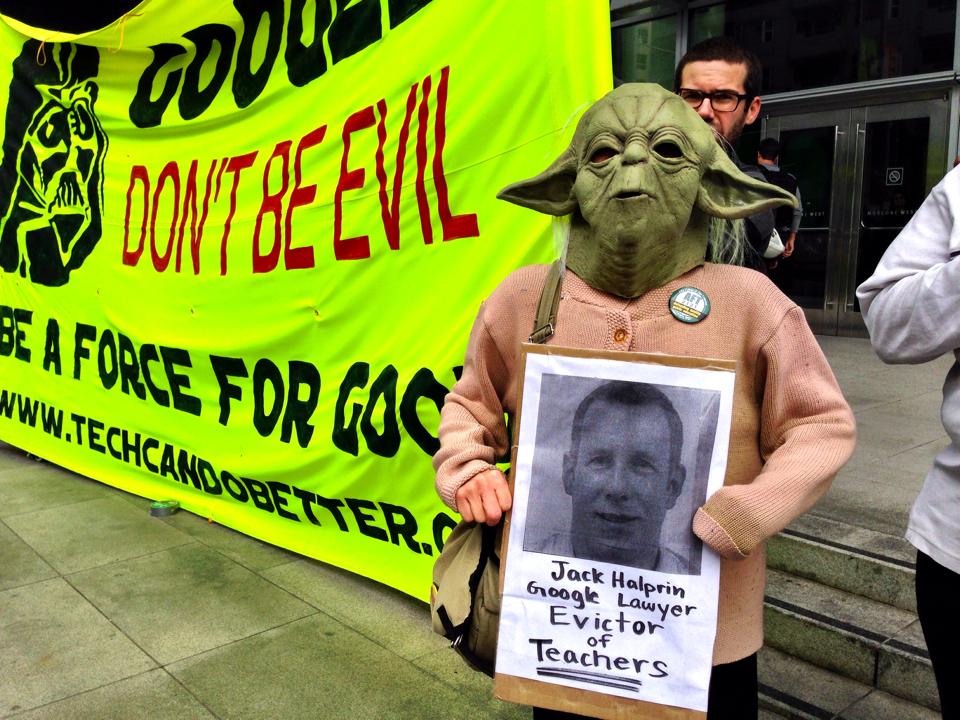 The outbursts were just the latest in a series of protests organized by Bay Area locals, who have blamed Google and other technology companies for raising the cost of living. Along with the two inside, protesters gathered outside of San Francisco's Moscone Center (where I/O is taking place) to publicly chide the company over a number of issues, from the evictions to taxes and investments in local communities.

Not the first protests for Google

Other complaints have centered on the buses that ferry tech workers between San Francisco and Silicon Valley, where most of the companies are headquartered. A new pilot program, which begins August 1st, will let commuter shuttles rely on certain whitelisted public-transit infrastructure like bus stops as long as the companies pay a fee and agrees to operate only during certain hours. Citizens have complained that the companies were making unfair use of the stops, and have continued to find faults in the proposed solution.

In a statement, Google said that thousands of its employees live in the Bay Area, and that the company wants to be "good" neighbors. "Since 2011 we've given more than $70 million to local projects and employees have volunteered thousands of hours in the community," a spokesperson told The Verge. "We're excited to be expanding that work in 2014 with the recent Bay Area Impact Challenge winners — several of them have even joined us at I/O." (The Impact Challenge is a Google-sponsored competition for grants given to nonprofits with ideas for improving local Bay Area communities.)

While fleeting, the scenario was highly unusual for what's considered the inner sanctum of a high-profile press conference. It's frequent to see protesters outside of press conferences and shareholders meetings from publicly-traded technology companies, though not inside an event where people pay hundreds and even thousands of dollars to attend, and are often vetted ahead of time. Today, that wasn't enough to let a few slip by.

It remains to be seen whether this up-close-and-personal encounter between Google and its detractors will result in something more substantial than the usual parrying of message points. Tirado said that during her escalator chat with Whetstone, the VP told her she was "sympathetic," and the two exchanged contact info, Whetstone intimating that she would "look into the matter."

"I really hope she's being genuine and can find the right person in the Google world to talk to Jack," says Tirado. Laughing, she imagined a scenario where everybody wins. "They could say, ‘This publicity is costing us a lot of money! Look, you can get a little bonus if you don't evict this person!' That's what I'm hoping."

More from this stream Google I/O 2014: everything you need to know