Nuclear power plants aren't being built fast enough for the world to hit important carbon emissions targets, according to the International Energy Agency. A lack of trust in nuclear technology, coupled with the global economic downturn that began in 2008, has resulted in a slowdown of construction and a plateau of the world's nuclear energy capacity. 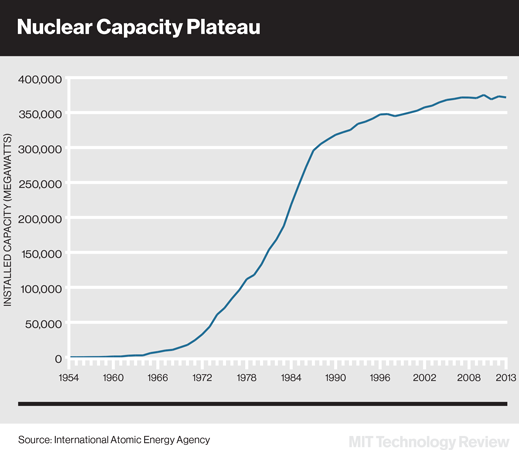 According to the "2DS" scenario presented by the International Energy Agency, the world must halve its energy- and process-related CO2 emissions from 2011 levels in order to ensure an 80 percent chance of limiting the global average temperature increase to 2 degrees Celsius (3.6 degrees Fahrenheit.) In order to achieve that aim, 186 gigawatts of nuclear capacity must be added between now and 2025. At current rates of nuclear plant construction, the Earth's nuclear energy output will fall between 5 and 24 percent short of that target. 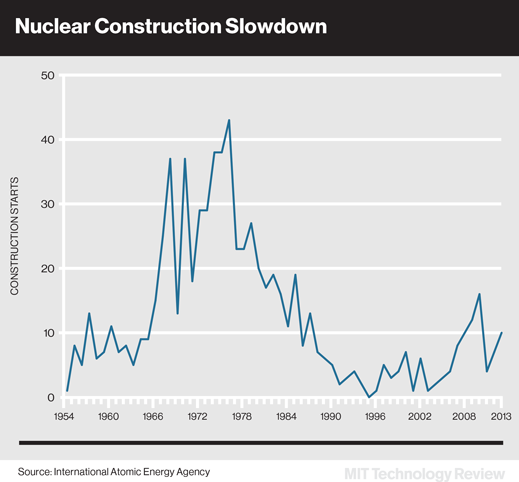 Worldwide attitudes toward nuclear power are mixed three years after the Fukushima disaster. Japan and Germany reacted quickly against the technology, shutting down their reactors and prompting public debates about nuclear energy's safety, while China and Russia pressing ahead, planning ambitious nuclear power plant construction projects. 72 nuclear power plants were under construction at the end of 2013, but such facilities usually take between five and ten years to get up and running, and need to be retired after 30 to 40 years of operation. Capacity is sometimes replaced rather than increased. The United States retired four reactors in 2013, with another slated to be taken offline this fall — the country only has five in construction.

Even with these projects underway, the IEA is projecting a shortfall in nuclear power. Fukushima shows the energy generation method can be dangerous, but the IEA warns that if nuclear capacity, which it says provides 18 percent of the world's energy mix, isn't increased, a spike in global temperatures could be even more damaging.