The day after Google gave its developers a vision for the immediate future, Regina Dugan and the ATAP team — "a small band of pirates trying to do cool shit," as she calls them — have taken the stage to talk about a few slightly more ambitious things. One is Project Tango, the tablets and smartphones equipped with incredible cameras that allow them to see the world in 3D. We've seen it before in prototype form, but the team announced on Thursday that next year, it's partnering with LG to build a consumer tablet that will go on sale next year.

The announcement came after a handful of demos that make clear how much potential Project Tango really has. "Imagine if the directions to your destination didn’t stop at the front door, but to tell you exactly where to go and what to do," program lead Johnny Lee told the audience. "The compute is here. The compute is genuinely here to do amazing things with our devices. What’s missing is the hardware and the software." He showed demos of mapping his house, playing a virtual-reality game that required him to squat with his tablet to chat with a very short wizard, and more. The whole story of Project Tango is the possibilities that arise when you've mapped the world around you, and what can happen when you're mapping it in real time.

Project Tango is, for the moment, still just a project. There's no detail on timing, specs, price, or anything for the upcoming LG tablet. But the ATAP model is to both invent and ship, and soon enough Project Tango will be real. 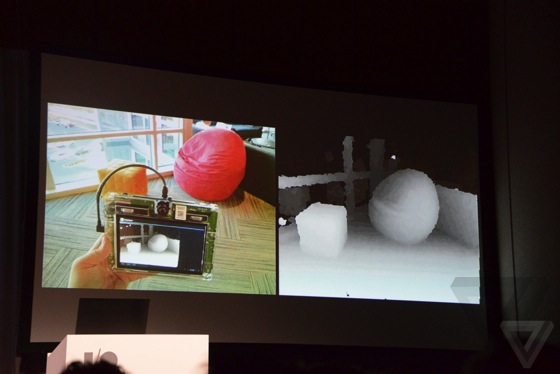