Share All sharing options for: Android TV is Google's best chance yet to own your living room

Google wants Android on every device you use — on your wrist, in your car, on your TV. The long-rumored launch of Android TV at Google I/O is one of the most notable facets of that strategy: instead of the old, overly complex Google TV product that failed to gain adoption, Android TV is based on the exact software that’ll soon roll out to millions of phones and tablets. And while Google failed in the living room for years, the company is taking what it learned with Chromecast, Google Play, and Android to finally build a true competitor to Apple TV and Roku.

Perhaps the most important lesson Google learned came from the extreme simplicity of Chromecast. Compared to the overly complex Google TV, Chromecast is a paragon of minimalism: there’s no interface, and everything is driven by your phone. Android TV is a step up, but using its various content and app stores will feel immediately familiar to anyone who has used a recent version of Android — particularly those familiar with the Google Play’s content and app stores.

"Chromecast really set the bar for simplicity, and we learned a lot from that," said Android engineering director Dave Burke. And now, Android TV and the new Chromecast mirroring feature mean that Google finally has an answer for Apple’s AirPlay technology. "The bet Cast is making is really about this new interaction model of using your phone, your tablet, your laptop, and your TV," says Rishi Chandra, product manager for Chromecast.

Google has made similar statements before, but now Android has matured to the point where it can represent Google’s unified presence across nearly every device you use. "Previously, Google TV was based on Android, but it was an older version of Android and it was tracking at a slower pace," says Burke. "We wanted to basically just make TV another form factor with phones and tablets." 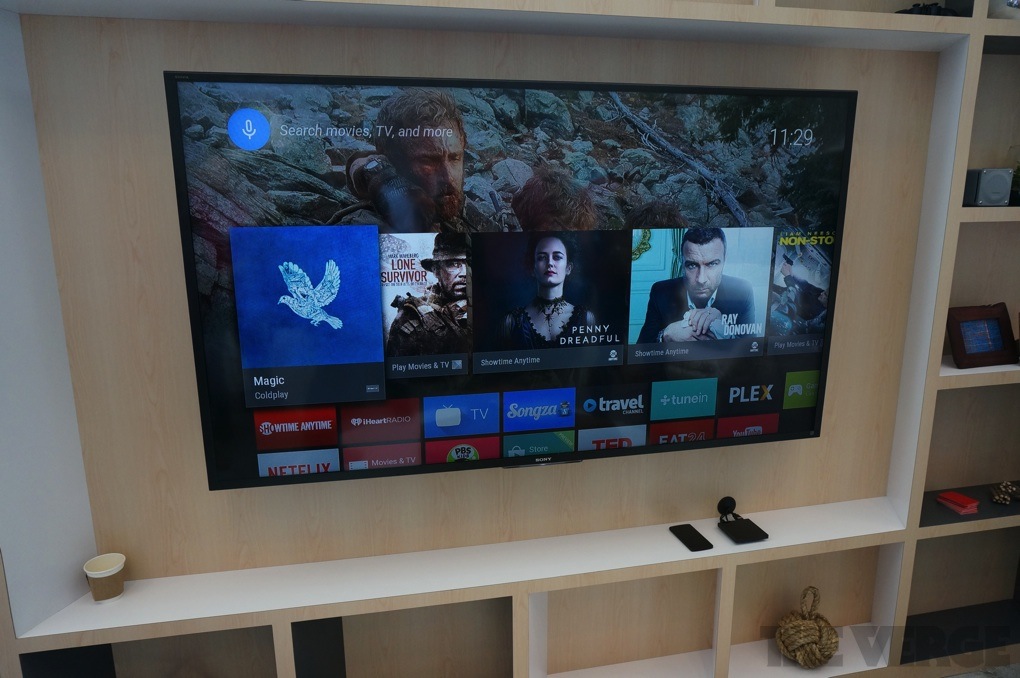 That approach benefits the millions of users already familiar with Android, but it also benefits developers building apps for the TV. Of course, there are differences building apps for a 10-foot interface, but Android TV should make it a lot easier for developers to get their apps on whatever screen happens to be commanding your attention. Games are a particular focus: while developers can write games that’ll only run on Android TV, Google is hoping and expecting that most will make their titles work across as many devices as possible.

And Google’s experience with middling Google TV hardware appears to be giving the company agency to impose tighter guidelines on its hardware partners going forward in an effort to deliver a high-quality experience. Burke said the company found a lot of "good learnings" from the Google TV effort, noting specifically that it provided an idea of the minimum specs and hardware needed to make a successful product.

It’s a trend that came up multiple times throughout our conversation: Google will decide just what kind of hardware is necessary to run Android TV and exactly which buttons are required for its new game controllers and remotes, all in an effort to make sure the user experience is consistent across devices. "We’re setting a pretty high bar for performance and connectivity and specs for what makes up an Android TV," said Chris McKillop, Android TV's engineering manager. That consistent experience will extend to software as well. While partners may be able to bundle in specific apps or services, the Android TV interface can’t be skinned a la Samsung’s TouchWiz or HTC Sense.

Android, on every screen you own

On upcoming TVs from Sony and Sharp, Android TV won’t be relegated to a single app amongst many others in an otherwise uninspired Smart TV interface — it’ll be the only way you interact with your TV, if Google has its way. The company believes that TV hardware has reached a point where Android TV is a viable option to be the only interface you see when you turn your set on.

The ubiquity of Android and the simplicity of Chromecast are good building blocks for Android TV, but it’s far from guaranteed that it’ll be a success. It took Apple years for its set-top box to be more than just a "hobby," and the marketplace is already crowded with successful players. However, there are already one billion people using Android on their phones, and Google is making it clear that those people will be best served by using other devices in its rapidly-expanding ecosystem. The company found its first TV success with Chromecast, but Android may have finally grown into what Google really needs to take over your living room.