Playful, colorful, and coming this fall

Google is making some big changes to Android for its so-called “L release” this fall, and starting today, it’s giving interested developers the chance to take an early look at it. Naturally, we wanted to try it out too, so we got the preview running on a Nexus 5 to see what it’s like.

There are three major changes on the surface of Android’s L preview worth paying attention to: an overall design overhaul, improved notifications, and rethought multitasking. The design changes are, of course, the most immediately noticeable. KitKat’s sleek Holo theme is being replaced with a colorful new style called Material Design, which Google says is based on basic shapes and sheets of paper.

Because Android’s L release is still in development, those design changes haven’t come to every corner of the operating system yet. In fact, they haven’t come to most. But where they are in place, it looks good. The dialer, for instance, now features bright blocks of color and playful animations throughout. The calculator is equally colorful, and the notification shade hints that you need to give it a little tug to access additional controls.

Android’s primary buttons are also seeing a change into simple geometric shapes, and the new icons actually work pretty well. A triangle looks like a back button, so it’s used to represent back; a square looks like Android’s multitasking cards, so it’s used to access the multitasking menu; and a circle echoes the the button that's long been used to pull up the app drawer — it's not the most intuitive, but it works. 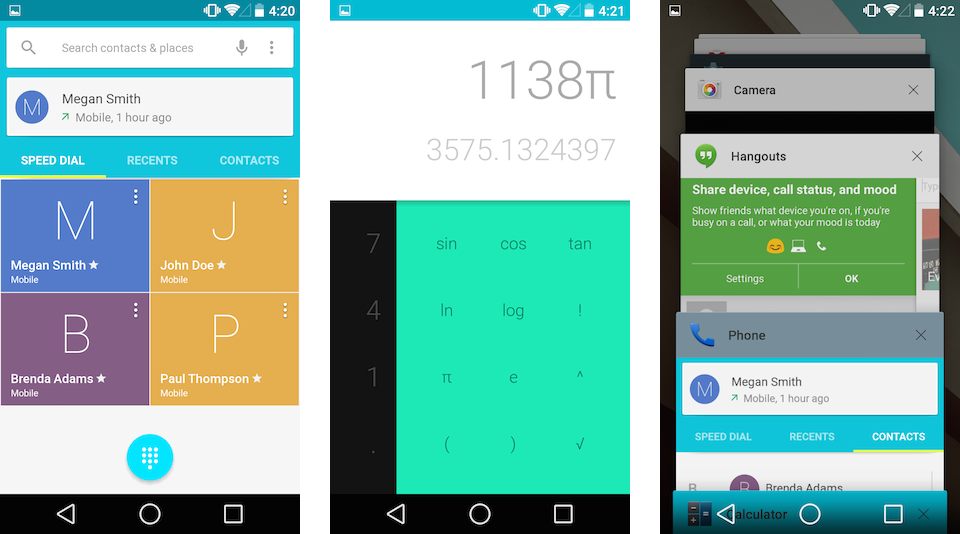 The multitasking menu actually looks a bit different here too, taking on a design that makes it work more like a free-floating Rolodex. But the big change isn’t style, it’s function: every tab that you have open in Chrome will now appear here, as though it were its own app. It’s a bold move by Google to continue blurring the line between native apps and the web. At a basic level, it means your multitasking view is likely to get a lot more cluttered. But otherwise, it’s still far too early to say whether it’s a better approach than before. Likely, what developers decide to do with this will make a big difference.

Android L’s final big change on display here is the ability to interact with notifications straight from the lock screen. Just like in the notification shade, you can swipe to dismiss notifications or drag to start interacting with them. Android L also introduces big, interactive popup notifications inside of apps — though these weren’t working for us just yet. Still, these changes all look like really useful additions, and it’s unfortunate to think that we'll have to wait a few more months before we can really start using them on our phones. 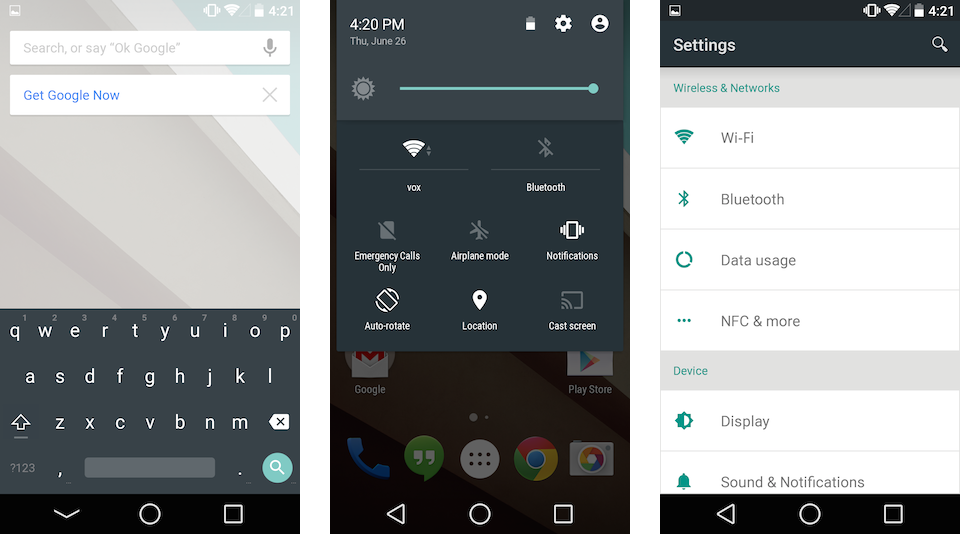 Of course, there’s a lot more going on in Android L under the surface. There are supposed to be improvements to battery life, search, and general performance of the OS, but that's all difficult to test on an extremely early preview. On top of that, Android L includes a few security improvements too, which should make it easier to unlock phones and manage work apps.

So far, there’s a lot to like on the outside of Android L. Now we just have to wait for Google — and for its army of third-party developers — to pull the rest together.