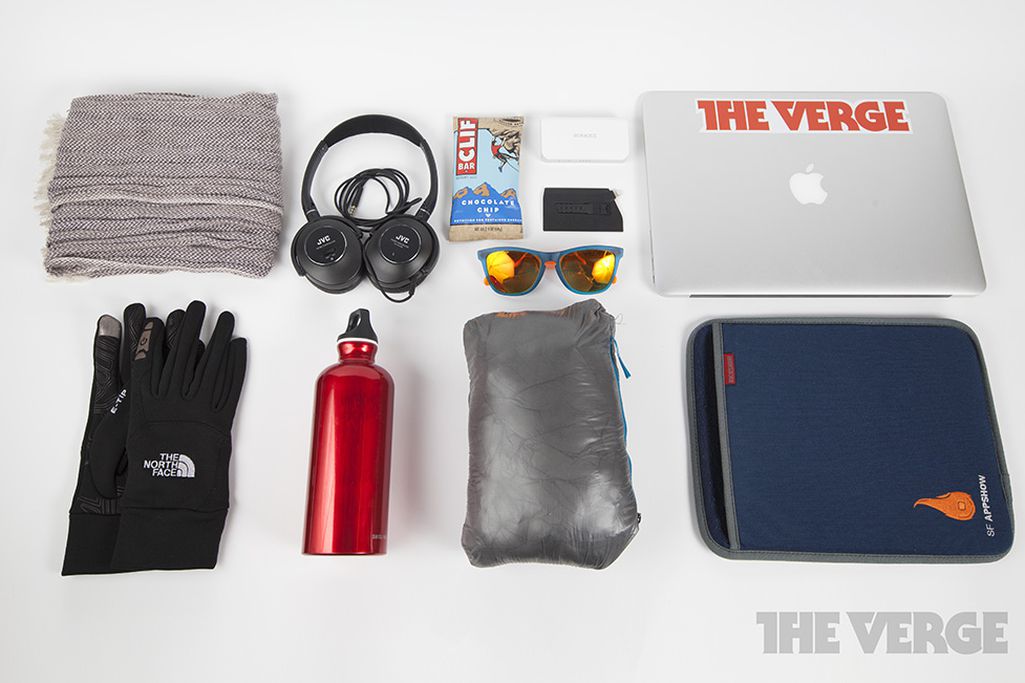 What’s in your bag? is a recurring feature where we ask people to tell us a bit more about their everyday gadgets by opening their bags and hearts to us. Show us your bag in this forum post. This week, we’re featuring Josh Lowensohn.

This is the contents of my typical daily work bag, plus a few additions for a frigid New York City. If I’m at a news event, or a longer trip, there’s usually more stuff in here. I deem most of these things essential to life, liberty, and the pursuit of Verginess. 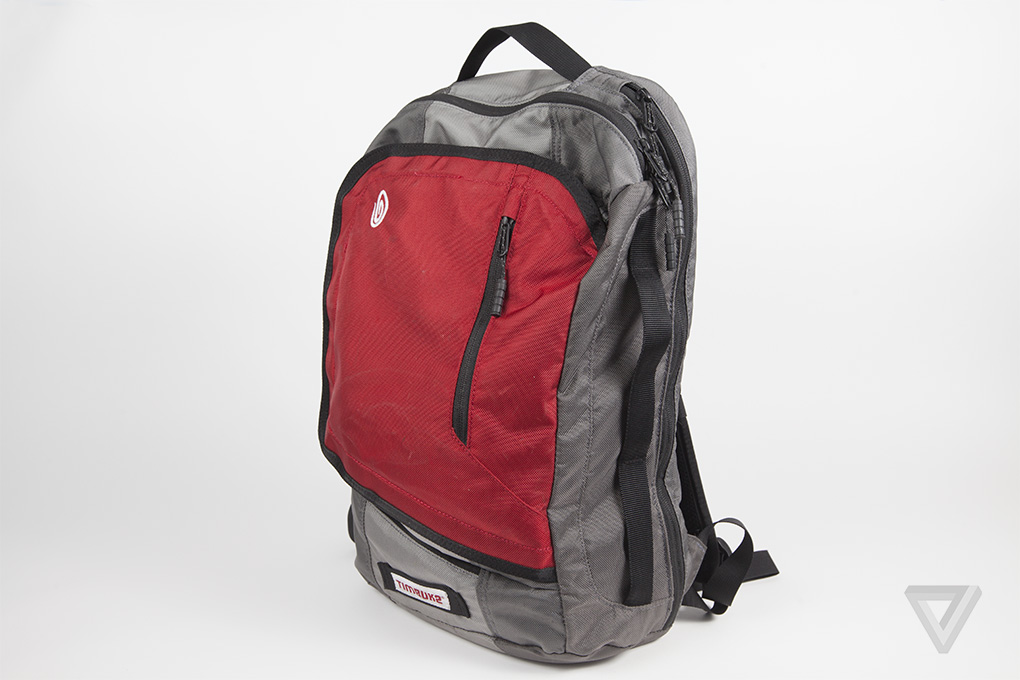 I’ve got a bag problem: I keep buying bags from Timbuk2, and they basically last forever. My favorite of the bunch is this Q laptop bag, which has a zany array of features that disappear into a simple design. The one most people notice right off the bat is the bottle-opener on the strap, which I have used exactly once, wherein I proceeded to spill beer all over myself. But it’s nice to know it’s there!

Things I dig about this bag are the straps and back padding, which hold weight well. It’s also got very smart organizational storage inside the smaller pocket on the outside, as well as in the main bag. My one major quibble is that they nixed the rubber-lined bottom, something that was on the last generation of the bag, and made you feel better when setting the bag down in the outdoors, or in moisture-rich public bathrooms at tech trade shows. The canvas version of the bag now has something similar, but it’s not in all models, which is a bummer. 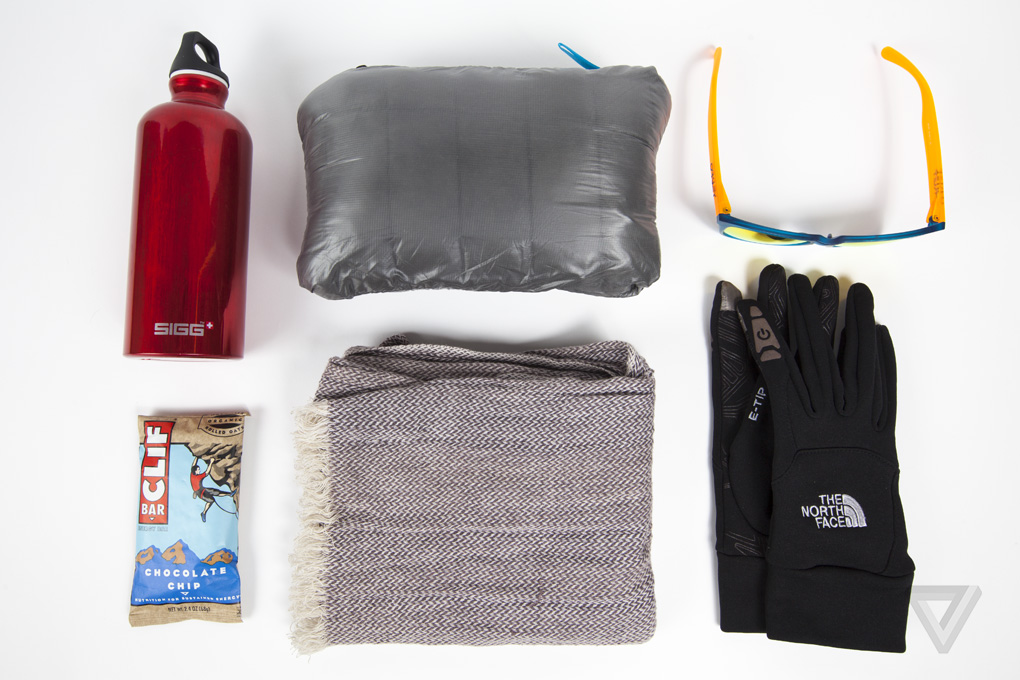 The jacket is named the Ghost Whisperer, but it has nothing to do with that TV show with Jennifer Love Hewitt. I picked it up for last year’s Consumer Electronics Show, and it's saved my life when going back and forth between the chilly winter desert hellscape that is Las Vegas in January, and the insanely crowded (and steamy) halls of the Las Vegas Convention Center. It weighs a little more than 7 ounces, and zips into one of the pockets, making it something I just toss in my bag if there’s extra room. Also, people ask how my astronaut training is going. No joke there.

This scarf is several years old, but like a fine wine has only gotten better with age. I don’t always scarf, but when I do, it’s usually this one. It’s survived velcro, public transit, and so much more. If I could go back in time to buy a scarf, it would be this one.

There was a time when gloves that worked with touchscreens were hard to get, and this product came right at the beginning of that wave. These gloves somehow fail at being very warm, or very good with touchscreens, but they’re better than nothing. You can very easily answer calls with the tips, but the fit on these was off just enough (for me at least) that cruising through email or trying to text was completely out of the question.

I got Lasik eye surgery a few years ago, and instead of saving money on eyeglasses, I’ve blown it away on sunglasses. These Oakley Frogskins are one of my favorite pairs because they’re both ridiculous and functional. Some retailers will let you mix and match the parts, which are all interchangeable, so this is an amalgam of blue and orange frames, with absurdly reflective yellowish polarized lenses. At the end of the day, they’re really light, have great coverage, and are unique in a world full of black Ray-Bans.

Remember the terror that was finding out most water bottles were made out of BPA-leeching plastic? I sure do, and that’s when I bought this water bottle. What it lacks in the visibility of your water like some polycarbonate bottles, it more than makes up for in pleasing colors and it's very light weight. I opted for Iron Man red, which is not the real name… but it should be.

Being hungry sucks, which is why I pack one of these in my bag when I’m smart enough to remember. They never quite get the job done of replacing a meal, but they take the edge off. The chocolate chip flavor is usually my go-to, but I am warming to the "sierra trail mix," which adds in seeds, raisins, and peanuts. Now I’m hungry again… 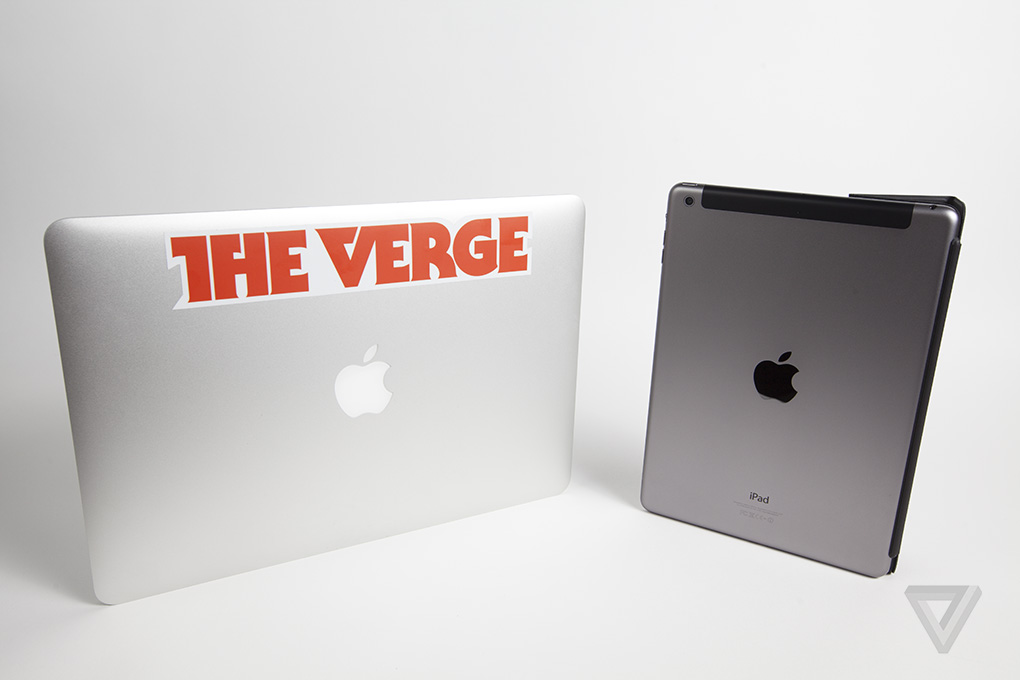 This continues to be my go-to work machine, and has been since the 2010 redesign. It’s light, fast, and does just about everything I need it to do, but that doesn’t mean there isn’t room for improvement. It could use a clickier keyboard, and the 11-inch model seems like it could totally fit an SD card slot on the right side. I also still find it hard to believe it’s 2014 and we still don’t have a version of one of these with built-in cellular data. Also, isn’t it about time we had one of these in gold?

This is such a ridiculously nice device, and goes with me just about everywhere. I bought the Mini with Retina display first, then swapped it out for this instead. As much as I like the idea of the Mini, the big one is just more pleasing to look at. I use mine mainly for browsing Reddit, tearing through email, and watching videos. I also picked up a T-Mobile SIM card that I keep in here and use for the free 200MB of data per month, because I’m cheap like that.

Rickshaw Bagworks is a sworn nemesis of Timbuk2, but I think they make better iPad sleeves. This is literally a giant, padded sock for my iPad. I’ll throw an iPad with a Smart Cover in this thing just to protect the back. 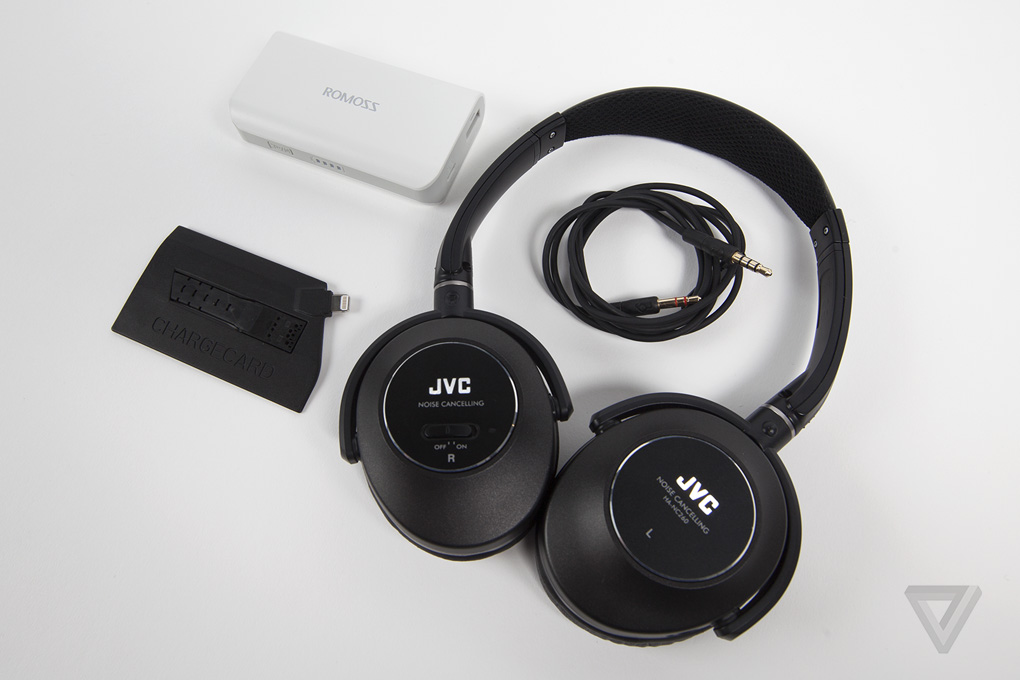 There are better noise-canceling headphones than this, but I like these a lot for when I travel. They cut jet engine noise like nobody’s business, and feel pretty good on my ears, even after several hours of use. When I’m back at the office, I’ll typically opt for my Sennheiser HD-280 PROs instead, which are too ungainly to wear in public, but sound much better.

I picked one of these up out of curiosity, and it’s been in my wallet ever since. It’s a simple USB-to-Apple Lightning adapter that’s about the size of a credit card. I keep it on me at all times in case I need to juice up my iPhone 5S (which is often). While useful in a pinch, the design here is still a bit kludgy, requiring some careful positioning when plugged into anything that isn’t a laptop. A newer variation from this company basically does the same thing with something that fits on your keychain.

I bought this for a trip to Europe last year, and pack it every time I’m going on a trip where power might be hard to come by. It’s got a 5,200 mAh battery, which means it should theoretically recharge my phone from the brink of death twice. I’ve never had to use it for more than one full charge before juicing the pack back up at the end of the day. Neat but mostly useless is the flashlight on here, which has an odd greenish hue and is only good for seeing in the absolute pitch black.