Share All sharing options for: I turned Google Glass into opera glasses

In 1983, at a showing of Strauss’ Elektra, the Canadian Opera Company changed opera forever. It introduced a concept that its creator termed surtitles, which projected translated lyrics alongside the performers. It allowed viewers to read the dialogue as they heard it sung in German, rather than having to read the plot beforehand or buy a paper libretto with the text. It also launched a veritable culture war.

To some, projections allowed audiences to appreciate operas on a new level. To others, they were a pointless, tasteless, even "pathetic" distraction. Metropolitan Opera music director James Levine was quoted in 1985 saying that the Met would show surtitles (often known as supertitles) "over my dead body." But today, supertitles are ubiquitous. Levine himself came around in 1995, when seat-back systems let individual patrons turn the titles off. A technology that was once despised had become indispensable. 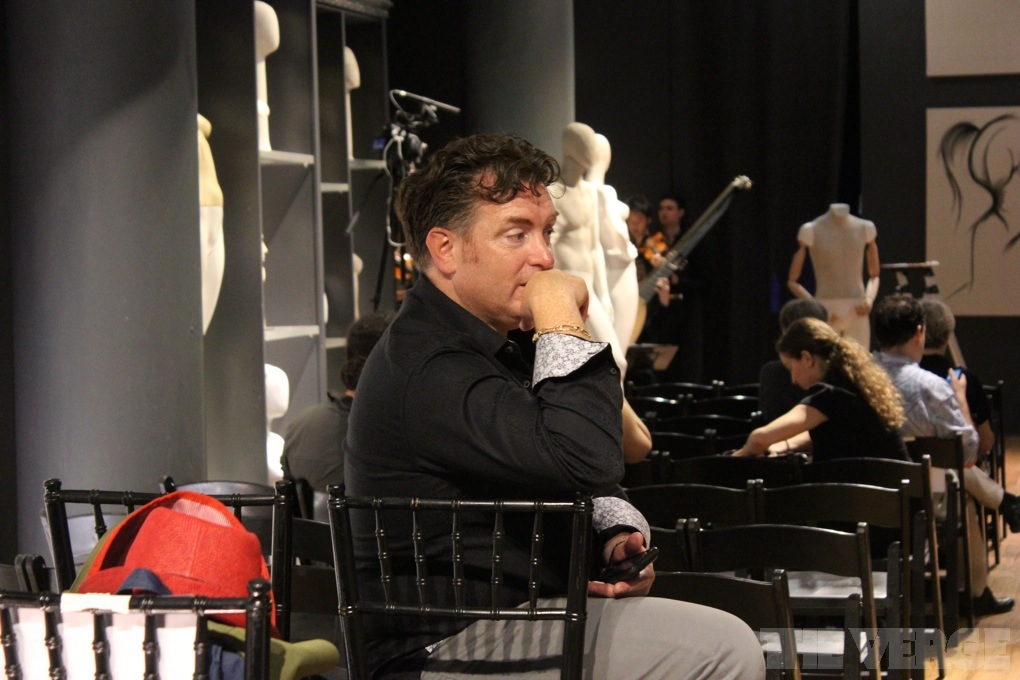 Pygmalion for Glass showed at the Lifestyle-Trimco Mannequin Showroom, with a conventional supertitle production at Madame Tussauds.

The underlying lesson is not lost on Eric Einhorn, the founder and artistic director of On Site Opera. The New York-based company, founded in 2012, performs operas that eschew the traditional stage. For its latest project — an adaptation of Rameau's Pygmalion performed amidst wax statues and mannequins — it tested a new kind of translation, projected not on a wall but on the lens of Google Glass. Working with veteran supertitling company Figaro Systems, On Site Opera streamed its lyrics through a web app called MobiText, allowing them to be played on Glass or a cellphone. It’s not just an experiment, it’s a way for On Site Opera to expand beyond an English-only repertoire. "There are some companies that do translations in English, singing translations, and that’s not something that we want to do. We like the idea of doing it in the original language," says Einhorn. But the venues it picks — including Harlem’s legendary Cotton Club and the Bronx Zoo — can’t effectively support projectors. "It became a real question for us — how do we do that? How do we get titles to people effectively?"

"It's a technology that has a learning curve."

At a showing last week, the system worked surprisingly well. Readable but minimally distracting translations floated in the corner of my vision, allowing me to move my eyes instead of my head. And unlike a seat-back or projection system, it didn’t matter which direction I was facing. That meant that performers could walk down the aisle singing, or start dancing in the back rows, and there was no reason not to watch them. Glass has rarely felt natural to me, but this replaced a system that was already artificial and sometimes inconvenient, requiring nothing more than a glance upward. Few things seem like obvious fits for Google Glass so far, but this is one of them.

Despite this, Glass’ rough edges showed through. On Site Opera’s original plan, at one point, was to get enough Glass sets for an entire audience. But the price tag — potentially $150,000 — wasn’t even the biggest problem. "It’s a technology that has a learning curve," admits Einhorn, a Glass owner himself. Most attendees would be getting a crash course in fitting and navigating an unfinished device they’d never used. "It was a blessing in disguise that we were unable to secure those 100 pairs of Glass that I was hoping we would get. It would have turned into a tutorial nightmare." My biggest problem was power: the roughly 45-minute, one-act opera drained half my battery. 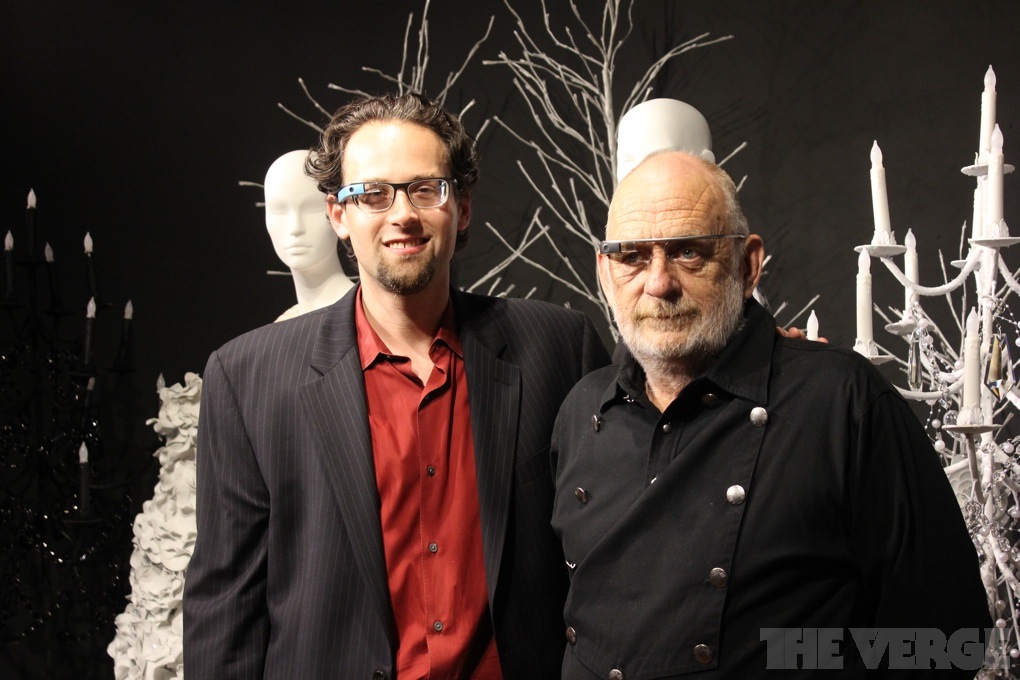 Eric Einhorn of On Site Opera and Geoff Webb of Figaro Systems.

Despite being advertised as "Pygmalion for Glass Explorers," most people weren’t actually wearing Google Glass. Einhorn estimates there were 10 to 15 people wearing headsets in the 50-person audience at my show; I saw slightly over a half-dozen in an informal count. At a second 100-person show over the weekend, On Site Opera passed a few sets out to the audience, where around a dozen people tried it for at least a little while. Most people spent the opera periodically looking down at their phones to see the translations, an experience that, while it didn’t look bad, seemed significantly less seamless.

If Glass becomes common — which will almost certainly require improving the hardware and user experience and slashing the price — the ratio will change. But right now, it raises an obvious question: what are you trading off by asking audiences to rely on their own hardware? On Site Opera is geared towards a wide range of ages and experience levels with opera, and Einhorn says he’s working to make sure no one gets left out, even with more widely available technology. On Site Opera might not be able to provide Glass, but it’s considering lending attendees iPads or simple printed librettos. "There might be people in any portion of that audience base that either don’t have a smartphone or don’t want to use a smartphone," he says. "There are people who the idea of that is not quite nice, to them. They want to turn their technology off and experience the event."

What On Site Opera gains is the chance to experiment with new, more dynamic productions. It may have taken place in a temporarily converted showroom full of mannequins, but Pygmalion took place mostly on a traditional stage. Now that Glass and Figaro’s online supertext system has passed its first test, the team is looking at more unorthodox settings — like an opera where performers pass through multiple rooms over the course of the story. "The idea of not having to set up six different projectors and have all that equipment, for all of it to run off of a single computer, is really exciting," says Einhorn. 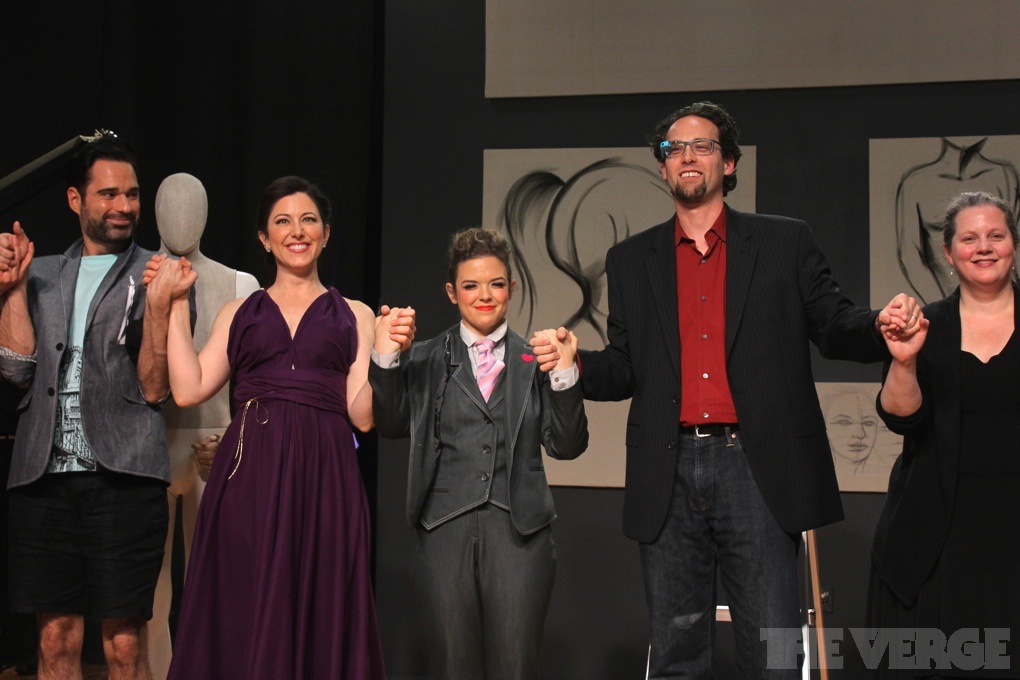 But all this, he notes, depends on what Google does with the technology. Given that, was he disappointed when Glass wasn’t mentioned at all in the I/O keynote? "I was a little disappointed. I was just surprised, more than anything," he says, referencing Glass’ recent launch in the UK and the improved version that came out the day before the keynote. "It just seemed like there would at least be some mention of it."

For now, Glass is a niche and polarizing device. In addition to raising privacy concerns, it’s frequently seen as strange or tacky, and Einhorn says he’s seen some pushback from people both online and in the industry. But though On Site Opera will continue to gauge audience reception to Glass, he hopes that like supertext, Glass can win over critics. "Some people think Glass is a wonderful thing, like I do, and other people don’t really care for it. So the idea of implementing a technology you don’t like into an art form that you love … people get very passionate about their opera, which is what makes it so great," he says. "What’s fantastic about it is when something in opera can start a conversation this way. It’s certainly not a staid museum relic anymore."