NASA's new flying saucer could help us land on Mars

NASA's new flying saucer could help us land on Mars

Landing the car-sized Curiosity rover on Mars was difficult enough, but what about when you want to go bigger? What about when you want to carry people to Mars? To test landing a larger payload on the red planet, NASA yesterday sent a flying saucer-like craft called the Low Density Supersonic Decelerator (LDSD) 180,000 feet into the Earth's atmosphere over Hawaii — and then dropped it. The craft, dubbed Keiki o ka honua, or "child from earth" in Hawaiian, was equipped with a donut-shaped "Supersonic Inflatable Aerodynamic Decelerator," which deployed first to create drag, slowing down the craft to just 2.5 times the speed of sound. Then, the LDSD deployed NASA's largest supersonic parachute yet. 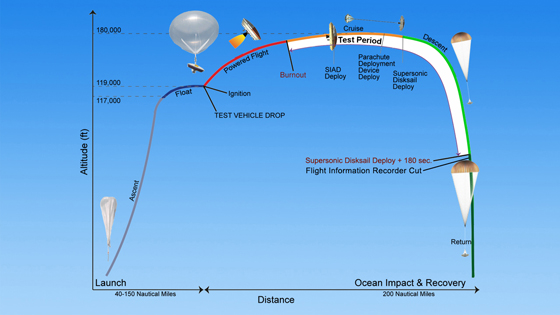 The parachute, which measures a giant 36 meters (118 feet) in diameter, was designed to slow down the LDSD enough to make a soft splash landing in the Pacific. But the test wasn't entirely successful, and the LDSD made a rather harsh water landing after the parachute failed to fully inflate. According to Yahoo News, NASA said that the $150-million test also wasn't a failure. "What we saw is a very good test," said NASA mission specialist Dan Coatta. "This is an opportunity to look at the data and learn what happened and apply that for the next test," he said.

NASA's new parachute is bigger than any others it's tried before, but isn't otherwise a new idea. NASA tested and used giant parachutes as early as the 1970s with its Viking landers. NASA landed Curiosity, on the other hand, with the help of a rocket-powered "Sky Crane," which hovered over the red planet and slowly lowered Curiosity to its surface. The Sky Crane technology could someday be used for larger payloads, but parachutes are a more straightforward and reliable solution for now, it seems. NASA has two more tests planned for its two-stage deceleration technology.