Given the widespread surveillance of groups like the National Security Agency, it's easy to feel like your private digital life isn't all that private — and a new art project aims to make that feeling a bit more obvious by turning your body into "an instrument for protest." Called "Open Informant," the project is a simple badge with an E Ink display. The badge is coupled with an app on your smartphone, which searches your phone's messages and communications for NSA trigger words like "assassination" or "bomb." It then displays those words on the badge in bold for everyone to see. 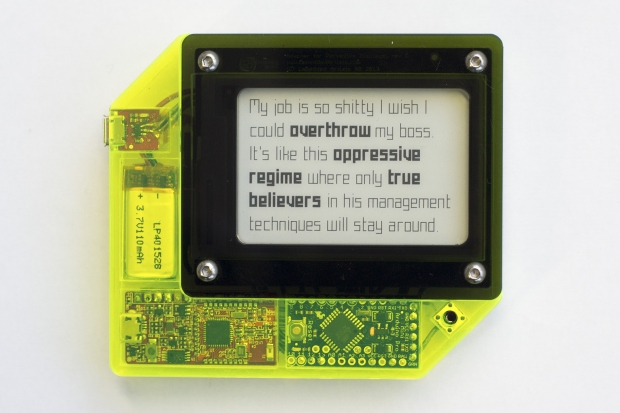 "By openly displaying what is currently taken by forceful stealth," the creators explain, "we question the intrusive forms of mass surveillance adopted by democratic nations on its own citizenry, and in the process, shift the conversation around wearables from being about you and your body as machine, to the culture of machine intelligence and algorithmic monitoring." The initial prototype was created in two weeks by London-based design studio Superflux, and the project is largely open source so that you can build your own. "The aesthetics of this wearable are purposefully embedded in the popular DIY culture," the designers say, "to encourage greater adoption and use."