A silent MacBook Air is now possible, if Apple wants it

A silent MacBook Air is now possible, if Apple wants it

Apple dedicated much of its WWDC 2014 keynote yesterday to the introduction of new Continuity software that blurs the line between the mobile iOS and desktop OS X operating systems. Today Intel has announced a reference PC design that could do the same with hardware. Built around the upcoming Broadwell processor, this 12.5-inch tablet prototype is a mere 7.2mm thick and requires no fan to keep it running cool.

Intel's presenting the design with a keyboard accessory that converts it into a laptop, but there's nothing stopping Apple from using it to build the next generation of its MacBook Air in a thinner, lighter, and now completely silent form. Recent rumors have suggested exactly such a change, with a 12-inch Retina MBA said to be in the works. It's expected to be the same size as the current 11-inch Air, but as powerful as the 13-inch model.

Or a fanless Surface Pro, if you prefer

Intel describes the 14nm Broadwell as the most energy-efficient Core processor in its history and promises to have it in devices on sale later this year. Asus' newly introduced Transformer Book T300 Chi (pictured below) looks like it will be among the first to use it, offering some tantalizing competition to the Surface Pro 3 for Windows users. It has the same 12.5-inch screen size and minimal thickness as Intel's proposed design and comes with a 2,560 x 1,440 IPS display. Irrespective of whether Apple or Microsoft follow the same path, this sounds like a good formula for devices that meld the capabilities of a desktop PC with the portability and tranquility of a mobile device. 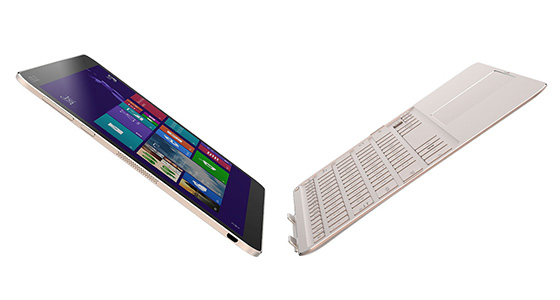