How virtual reality could save your life during a disaster

How virtual reality could save your life during a disaster

In 2011, a Virginia-based IT company called Intelligent Decisions developed a simulation system for the US military that would help prepare soldiers for combat. The system, called the "Dismounted Soldier Training System" or DSTS, used a head-mounted display and a laptop worn inside a military backpack to immerse soldiers in a virtual learning environment similar to a military video game. Now that same company is turning its attention to the civilian world with a system it simply calls "Medical Simulation." And the company says it might soon help train healthcare professionals for difficult surgeries, disaster response, and could even be used to treat people who suffer from PTSD.

Like its military counterpart, ID's Medical Simulation will allow groups of people to train in highly realistic virtual environments. For example, Medical Simulation could recreate events such as the Boston Marathon bombing or Hurricane Sandy to better prepare first responders in large cities. "We need first responders to be able to handle the chaos of that event, the fast triage, the assessment of casualties," says Eric Rohde, chief strategist of medical simulations at Intelligent Decisions.

Before the start of each training session, up to nine first responders will stand in a large, bare room. When they don the display visor, Rohde explains, they will be fully immersed inside a game world that includes visual, auditory, and even atmospheric conditions like dust or rain, replicating the chaos and situational challenges of an emergency. As the user moves through the room, her movements are represented by an avatar to other players. "You see them as their avatar, you communicate, you give orders, and you assess wounds as if it's in a real-world setting." 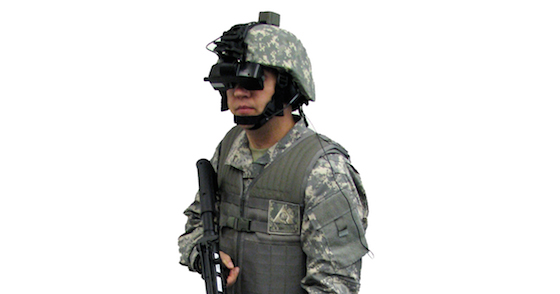 Rohde says that Medical Simulation will still fit the needs of the US military, but its development is being driven by civilian medical communities, as evidenced by the company's partnership with Baylor Health Care System. "In the case of Baylor, what we're progressing toward is a multi-person, full immersive game environment that trains teams" based on the medical requirements of various scenarios, such as mass casualty events.

the system can train the user to ignore distractions

Medical Simulation also generates a ton of data thanks to a plethora of biosensors that can track a user's gaze, blood pressure, and heart rate. That data can be used to analyze a person's reaction to the situations she encounters and to tailor the simulation accordingly. If a user is failing to control a crowd or ignoring certain cues about who's more injured — looking at the uninjured person yelling at the top of her lungs, for instance, instead of the person passed out right next to her — the system can train the user to focus and ignore distractions.

The system will also make it possible for drills to take place in extremely realistic settings. Users can make the simulation perfectly resemble an actual building or room to ensure that the training is accurate. "It could look exactly like the operating room that they work in every day," Rohde says, "right down to the color of the walls, the textures, and the machines that are there." 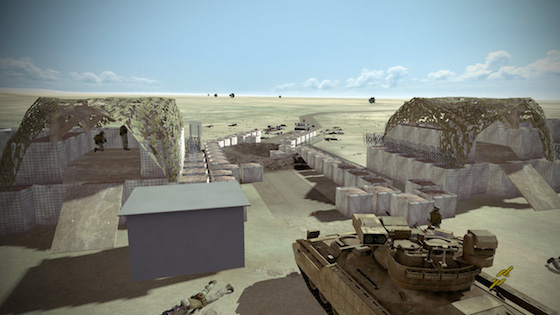 What is perhaps most exciting about Medical Simulation, however, is its ability to integrate mannequins and actors into the virtual reality simulation — a capability that Intelligent Decisions had begun to explore with DSTS, but has not yet fully integrated into the system. "I can bring in a real person, lay them on a real table — which you see inside the virtual environment — and we can make it look as if the real person is bleeding, as if they have a wound," Rohde says. First responders can apply pressure on what appears to be a real wound and carry actual people around, making the virtual world both more lifelike and more instructional.

a valuable tool for treating people with PTSD

Beyond the medical training applications, Intelligent Decisions thinks that the technology will be a valuable tool for treating people with PTSD — a possibility that some researchers are already exploring with Oculus Rift. "We have the ability to take the sufferer back to a very specific corner in Baghdad — or wherever," Rohde says, to perform exposure therapy. "Slowly and carefully exposing [people with PTSD] to the traumatic event in a narrative form is an effective way of reducing post-traumatic symptoms," says Aaron Krasner, a psychiatrist at Silver Hill Hospital in Connecticut who isn't affiliated with Intelligent Decisions. Medical Simulation will allow clinicians to see what patients are looking at during simulations, Rohde says, and to realize that "their heart rate jumped to 15 beats a minute when they saw this thing — so we know that's a trigger for them." In the hands of a skilled psychotherapist, Krasner says, it could be "a responsible use of technology."

Unfortunately, ID's Medical Simulation platform isn't ready for prime time yet. "It's not in a place where we could hand you software," Rohde says. But the company thinks the system could make it to market within the next two years, depending on the level of funding it receives.

As for cost, Rohde wouldn't name a number, but he said that the price will be "institutionally affordable," and will likely vary depending on a facility's requirements. "It's not going to be millions of dollars. It's not going to be hundreds of thousands of dollars. It's going to be something less than that," he says. "To buy DSTS is no small ticket, but to buy the system we're developing will be affordable — and ideally it will be affordable down to the clinic level."