Samsung hooks up with Ford to make lighter car batteries

Share All sharing options for: Samsung hooks up with Ford to make lighter car batteries

Ford and Samsung's SDI group today announced research on new battery technology designed to trim weight and improve efficiency on cars, trucks, and other automobiles. At an event here in San Francisco, the two companies showed off a new dual-battery system that combines lithium-ion with lead-acid batteries to extend the life of the lead-acid battery on cars with start-stop engines.

On typical cars that use start-stop to save fuel, the lead-acid battery is necessary but can wear down if you're using it too often, says Kumar Galhotra, the VP of engineering for product development at Ford.

"Start-stop by definition means you have to restart the battery — you have to use the lead-acid battery all the time. But if we can have this regenerative braking and this parallel battery, you can save the lead-acids to be more effective on the start stops," Galhotra says. "Now we can use start-stop more often, so you get better fuel economy."

Start-stop is in most new Ford cars now

Ford says it's using start-stop technology in 70 percent of its cars, and that the dual-battery system could extend the use of batteries in non-hybrid vehicles as well.

Along with the dual-battery technology, the two companies announced — but did not show off — what they called an "ultra-lightweight" battery concept. That design is about 10 pounds, or what Ford says is 40 percent lighter than the hybrid batteries made out of nickel-metal-hydride. It can also be put under passenger seats, trunks, spare tire compartments, or in a car's center console, Ford says.

The ultra-lightweight design aims to reduce the overall weight in cars, and eventually replace lead-acid batteries. It was announced alongside two, lightweight concept cars made by Ford that trim weight to improve efficiency. On hand was an F-150 truck that's 700 pounds lighter with the use of steel and aluminum alloys, as well as a concept Ford Fusion that uses similar materials to trim the weight by 25 percent. Neither of those two uses the new dual-battery systems, and are still undergoing testing for things like corrosion, collisions, and road noise, Ford said. 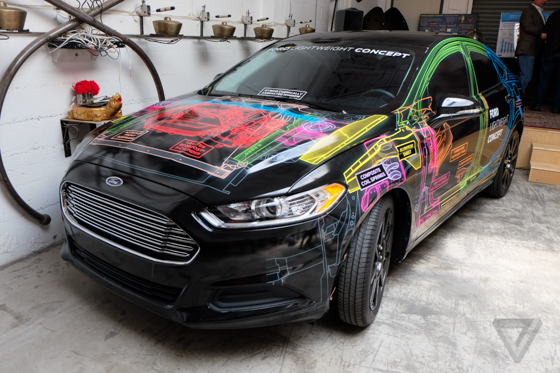