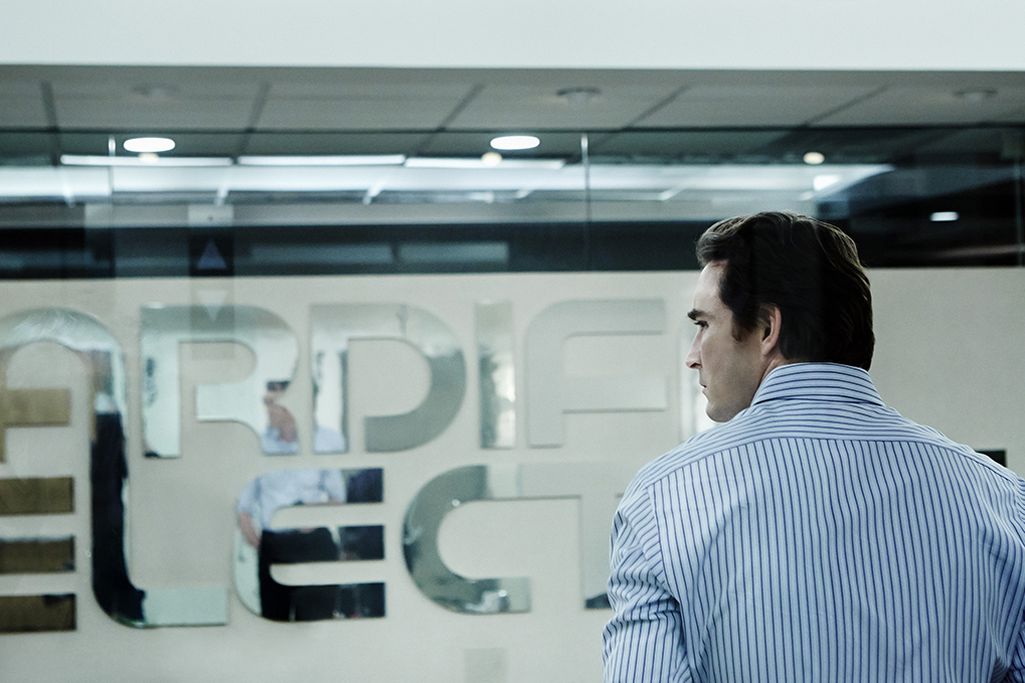 We love TV and we love recaps, but a lot of times it’s not the big-picture plot developments that make a show great. It’s the little things; the details in the dialogue, set design, props, and performance. With Close Up, we’ll be taking a look at the coolest moments and most interesting details in some of our favorite shows. Today we’re looking at the latest episode of AMC’s period drama Halt and Catch Fire: “Adventure.”

After the near-meltdown that Joe caused last week, things are humming at Cardiff Electric. Joe does his best Ricky Roma to entrance a group of potential retailers, the Wall Street Quarterly article has come out, and expanded software and hardware teams are moving forward and in good spirits. To meet the size and weight goals of the Cardiff portable PC project, Gordon realizes a traditional monitor (by 1983 standards) simply won’t cut it: they need to opt for an LCD screen. Unfortunately, those are pretty pricey, but his father-in-law has an in with a Japanese company that makes some of the best screens in the business. A meeting with the Japanese executives goes awry when Gordon has several whiskeys too many, but he’s able to repair the damage in the end — though not without undermining Joe’s ever-inflating ego.

Meanwhile, Joe MacMillan, Sr. has shown up and is trying to meet with his son, but keeps getting blown off. He ends up running into Cameron, and uses some heavy-handed flattery in an attempt to get her on his side — but Cameron smells his tactics a mile away. That’s not to say she leaves the exchange empty-handed, however.

After Cardiff’s new software manager assigns Cameron to work on printer drivers, she is less than thrilled. But Joe’s dad explains the bloodthirsty way his son climbed the corporate ladder back at IBM, and when Cameron heads back to the office she takes a page straight from the MacMillan playbook. She undermines the new software manager, fires half the team, and using a computer game as an effective object lesson installs her own hand-picked group of coders that she’ll lead herself. 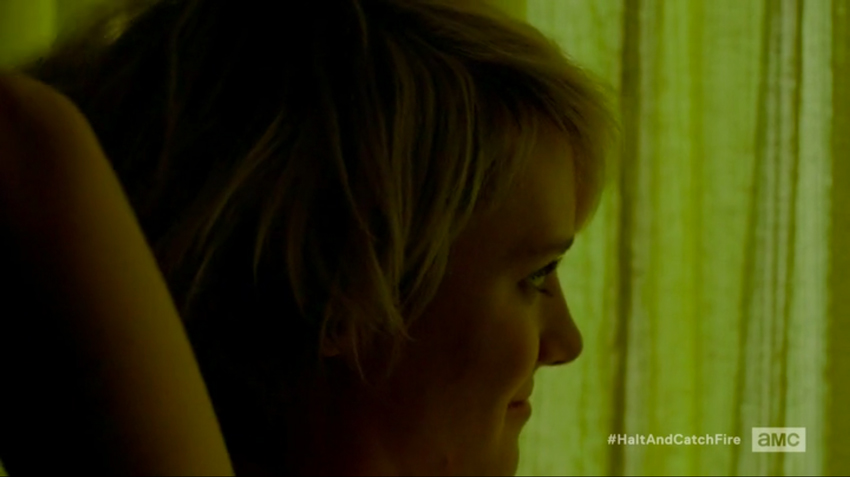 In almost every episode, Halt and Catch Fire makes a point of establishing the time and place with some inspired period music cues. The opening of "Adventure" seems to be doing the same with a moody, synth-heavy track that calls to mind early Depeche Mode — only the song is actually from 2011.

"Capsize" is the work of Big Black Delta, the solo project of Jonathan Bates (Mellowdrone). The band’s spacey, experimental synth-rock seems right at home in the universe of Halt, matching Joe’s existential angst and Cameron’s in-the-groove-and-feeling-it vibe perfectly. The song is from the band’s first full-length album, BBDLP1, though the songs on that record have since been repackaged with some additional tracks and re-released on the eponymous Big Black Delta.

Don't take the inclusion of "Capsize" as a sign that the show is moving away from vintage (and often expensive) music cues, however. Series co-creator Christopher Cantwell writes that the episode with the most expensive music budget is still on the horizon. 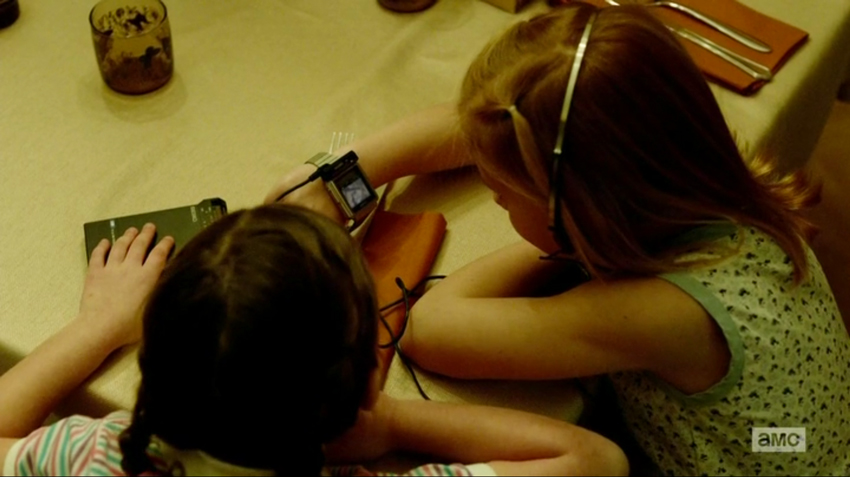 The smallest TV in the world

Getting a better look at Android Wear was one of the highlights of Google I/O last week, and Halt and Catch Fire puts it all in context by showing off an early 1980s wrist-worn television. The Seiko TV Watch featured a 1.2-inch screen and a separate TV tuner the size of a Walkman that plucked the television signals out of the air. Users were expected to wear the tuner on their belt, and the screen itself wasn’t actually backlit — so you’d usually have to be somewhere with decent lighting to get a usable image. At which point you could probably just watch a regular television.

A 1983 New York Times article about the watch’s launch notes that its $495 price tag was likely too high, and it certainly never took off as a mainstream product — but that didn’t stop it from leaving a cultural impression. The 1984 Guinness Book of World Records named the watch the smallest TV set in the world, and it received the big-screen treatment as one of Q’s special gadgets in the James Bond movie Octopussy. 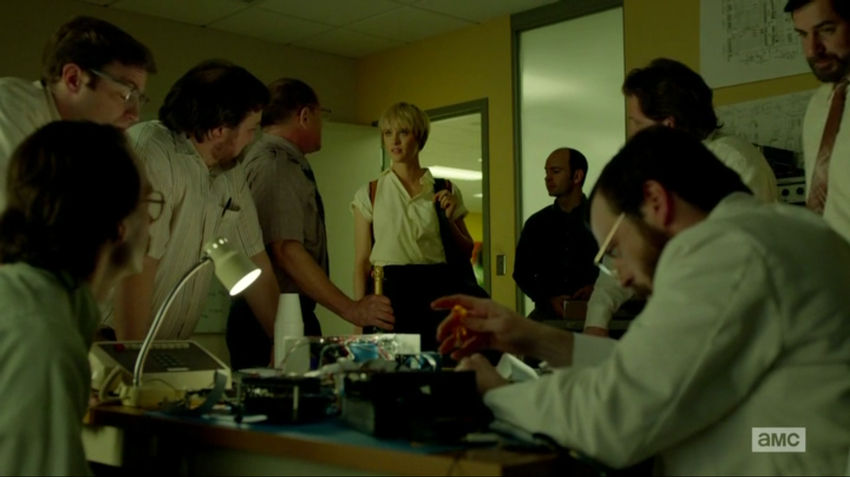 No, not that Lovelace

When Cameron comes back from her business trip, the hardware engineers are bandying about possible codenames for the project — Death Star and Khan are in the running — but Cameron steps in and announces it will be called "Lovelace." The engineers snicker, at first thinking it’s a reference to Deep Throat actress Linda Lovelace, but she’s got someone more relevant in mind.

Ada Lovelace was a 19th-century mathematician, the daughter of poet Lord Byron, and is considered the world’s first computer programmer. Early in her career, Lovelace began working alongside Charles Babbage, another English mathematician and engineer who designed mechanical machines to carry out complex calculations. His early designs for "difference engines," as he called them, gave way to a more complex machine for general-purpose computing that he dubbed the Analytical Engine. None of his projects were ever actually constructed — well, not in his lifetime anyway — but while working with him Lovelace created what is now considered the first program that could be carried out by a machine. It was Lovelace that saw the potential for computers to become something more than mere number-crunching machines, a vision that set the stage for computers as we know them today — and one that Google noted on her 197th birthday. 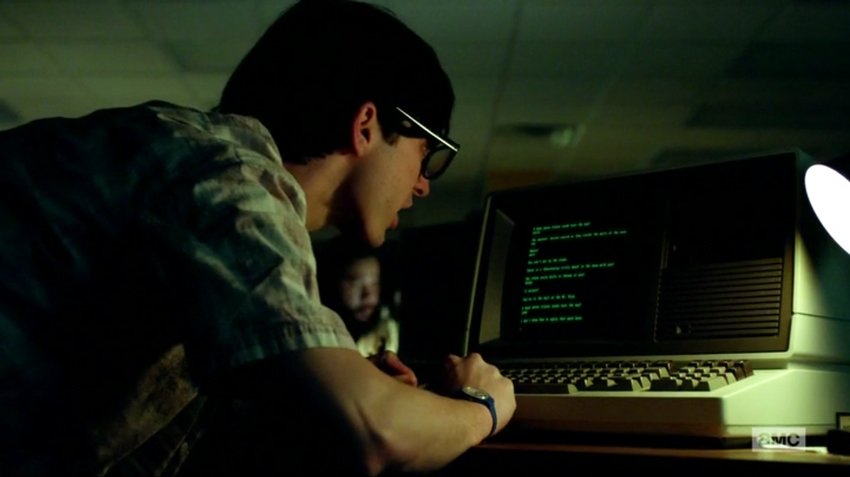 Cameron picks her A-team of programmers by finding out who was smart enough, and unorthodox enough, to beat a computer game by diving into its code and figuring out the shortcuts. The game in question is Adventure (also known as Colossal Cave Adventure), and was developed by programmer William Crowther in the mid-’70s. Long before graphics were a viable option, Adventure relied on text descriptions to tell the player where they were, and allowed them to type simple commands — "go north," or "turn on lantern" — to interact with the world. A programmer named Don Woods discovered the game at the Stanford Artificial Intelligence Laboratory and expanded it with Crowley’s consent, releasing what’s often considered to be the definitive version of Adventure in 1977.

The title spawned an entire genre of gaming. It led to the creation of Zork, a sprawling, fantasy-laced text adventure that was first distributed on the ARPANET. Seeing potential in computer gaming at home, Zork’s creators helped found Infocom, a company the specialized in what was termed "interactive fiction." Throughout the 1980s Infocom published dozens of text games, including titles like The Hitchhikers Guide to the Galaxy (created with author Douglas Adams), Planetfall, The Lurking Horror, and Suspended: A Cryogenic Nightmare.

With the advent of more powerful computers and sophisticated graphics, text adventure games eventually fell by the wayside, but there’s an elegance to them that’s hard to match. Thanks to modern-day interpreters, they’re still playable today — if you know what corners of the internet to explore. As for the original Crowther and Woods Adventure, you can check it out right here.