Android Wear review: the everything inbox

Share All sharing options for: Android Wear review: the everything inbox

Pretty much everybody I know hates their inbox.

It's not just email either, though it tends to take the brunt of everybody's anger. There are dozens of apps sending us hundreds of notifications; managing all that incoming information is a genuine hassle. Looking at the notification center on our phones, it's hard not to imagine some harried, 1930s office worker. His tie is loosened, sleeves rolled up, sweat beading on his forehead underneath a green visor as he looks at the metal tray marked "INBOX" on his desk. It's piled high with a stack of paper, sent to him from people he doesn't know and doesn't love.

But in this Kafkaesque world, it's not just people who want more work from him who are adding sheets to the pile. It's also people who want to tell him the weather, people who want to let him know there's a great deal on coffee down the street, people who want him to join his so-called friends in a conversation about some random television show. You'd offer to help, but honestly the best help you can think of is to just offer him a match.

Now imagine that inbox is strapped to his wrist. How could that possibly make his life better? That's the promise of Android Wear. Strange as it may seem, it does help, just a little.

Android Wear was revealed last week at Google I/O and two watches are already on preorder: Samsung's Gear Live and LG's G Watch. They only work with Android 4.3 and above (go here with your phone to see if yours works) and the best one, the Moto 360, won't be available until later this summer.

First and foremost, a watch needs to give you the time. Fortunately, Android Wear does that just fine. The two watches we've tested default to an always-on mode with a black background and white text for the watch face.

You can select from multiple watch faces by holding down your finger on the home screen. The Gear Live has about a dozen and none of them are great, but the G Watch has over 20 and some are really stylish. Unfortunately, Android Wear doesn't allow developers to create custom watch faces yet, though Google tells me that will come in time. 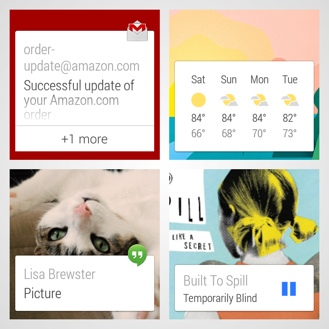 Android Wear is a little remote for your notification center

Google's take on the smartwatch isn't too different from what the people behind the Pebble figured out last year: it should be all about notifications. At its core, Android Wear is a little remote for your Android phone's notification shade. Everything that appears there also appears on your watch, and when you dismiss notifications on the watch they also disappear on the phone.

Google being Google, there are some other features added on that rely on the company's traditional strengths. You will get Google Now cards in addition to your notifications, showing you things like the weather and upcoming flights. There's also robust voice control, allowing you to do everything from searching to texting to setting timers. Some watches have fitness features too — both the G Watch and the Gear Live have a step counter and the Gear Live also has a heart-rate monitor.

Getting around the watch is simultaneously dead simple and a little complicated. It's dead simple as long as you treat the watch as a dumb terminal to your phone and don't worry about finding those advanced features. You simply swipe up to scroll through your notifications, swipe right to dismiss them, and swipe left to access more options for each one. It gets complicated when you want to dig into some of the options; they're so buried under hard-to-find "Start" and "Settings" menus that I can only assume Google wants you to mostly ignore them. Fortunately, you can do exactly that most of the time.

There are more settings to be found in the companion Android app. You can dig into specific notification and pairing options, like muting specific apps. I'm also happy to report that Wear respects your Gmail notification options — if you don't have email set to buzz your phone, it also won't buzz your wrist. More importantly it’s where you'll manage associated Android Wear apps, which will be available after July 7th. Different apps can register themselves to different voice commands — so, for example, "Okay Google, take a note" could someday be mapped to Evernote.

Tapping on the main home screen activates voice actions, as does saying 'Okay Google" when the screen is on. There is some logic baked in to that voice action, but not enough. It's smart enough not to launch a search on both your Android phone and the watch (it defaults to the watch when available), but not smart enough to know who is saying "Okay Google." It took about 15 seconds for the people around me to figure this out and start messing with me by yelling "Okay Google" when they saw me with my watch. Add in the fact that this thing can send emails and texts with just your voice, and you might have problems if your friends want to mess with you.

The voice features make your watch something you can actually do stuff with and it's sometimes convenient to quickly send a reply to a text or email, but the main thing you'll be doing on Android Wear is managing notifications. 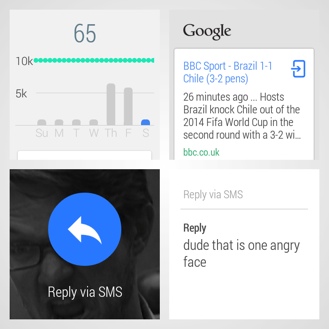 There are basically two kinds of people in this world: those who check their phone immediately when it buzzes and those who don't. If you're the sort that does, you're going to enjoy having your inbox on your wrist. When something comes in, you can quickly glance down to see what it is without completely ignoring whatever you're doing. You can act on some of them too, thanks to Android's rich notification actions. That means that you will be able to play and pause music from apps that put those controls in the notification center, for example.

It's a small happiness to get an email you want to immediately destroy and be able to immediately destroy it from your watch. It's a small happiness to glance down and see that the weather or package-tracking information you want is sitting right there. But for every time Android Wear gives you exactly what you want, there's another time that it frustrates you. If you have more than one email stacked up, for example, you can't manage them from your watch — you'll have to go to your phone for that. There are other hassles, too. Android, unlike iOS, doesn't put those little numbered badges on your icons. That means that if you dismiss a notification, it's solid gone and I have accidentally swiped the wrong way on my watch several times.

The other problem is a deeper one: you need to put quite a lot of your faith in Google to get the most out of Android Wear. You can't really organize or manage all these alerts — they pop up when they do and you can only scroll through them or dismiss them. You have to trust Google to give you the information you want. Even more than that, you have to trust Google Now's algorithms to do the right thing with all the personal data you're probably already giving to Google.

Managing your entire inbox isn’t what Wear is for

One of the main reasons I like Android is that it does a better job than any other phone of giving me powerful ways to manage notifications. I practically live in that notification center — dismissing stuff, archiving email, tapping reply on texts. I think of the notification center as the Everything Inbox. It's more than email, it's like a pager for every damn thing that comes your way: phone calls, texts, annoying Groupon deals, and all the rest. It's easy to get angry at it and even easier to think that having Android Wear is just another way for the Everything Inbox to bother you.

But managing your entire inbox isn’t what Wear is for. It’s for small, helpful moments and quick Google searches. Android Wear is like Google Now, both literally and figuratively. It literally displays the same cards that show up in Google Now, syncing what you keep and what you dismiss. But Google Now also sometimes just doesn’t show you what you expect, for better or worse, and the same thing applies to Android Wear.

All of which means Wear won’t save you from the Everything Inbox, it just makes it a little easier to keep tabs on your notifications. Beyond that, there’s no substitute for pulling your phone out and getting down to business.