Inside Keurig's plan to stop you from buying knockoff K-Cups

Imitation K-Cups are booming, but Keurig's new brewer will lock them out

Share All sharing options for: Inside Keurig's plan to stop you from buying knockoff K-Cups

No company has done more to change the way Americans drink coffee in the last several years than Keurig Green Mountain. Its method of brewing coffee by injecting hot water into prepackaged plastic pods has quickly grown to rival drip coffee as the preferred means of getting a quick hit of caffeine. "It was slow to start, but now it’s growing by leaps and bounds," says Joe DeRupo, communications director at the National Coffee Association. "It’s the biggest change in coffee-brewing technology since Mr. Coffee was introduced in the 1970s."

One of every four dollars Americans spend on coffee to be brewed at home is now spent on pods, and Keurig, which pioneered the process in the US, dominates the market. But Keurig’s hold on the industry is not as secure as it once was. In September 2012 key patents on its K-Cups expired, and ever since third-party companies have been making pods and selling them at lower prices. In the second half of last year alone, private-label cups went from 7 percent of the market to 14 percent. A report from Credit Suisse published this month found that sales of private-label cups grew by 203 percent over the last year, while Keurig’s Green Mountain cups grew by only 12 percent.

This is a particularly threatening form of counterfeiting for Keurig. Like printer companies with their inkjet cartridges, Keurig’s business model is built on selling machines cheap and then reaping huge profits on the refills. Now, bereft of a legal monopoly on pod making, Keurig is trying to establish a technological one: its new brewer, which goes on sale this fall, has a mechanism that scans each pod for Keurig’s markings and locks out any unapproved capsules. It’s essentially digital rights management (DRM) — a mainstay in music and video — adapted for coffee.

It’s the biggest change in coffee-brewing technology since Mr. Coffee

At a Keurig tasting event in New York last week, an employee showed me how it worked. Or, rather, he showed me that it worked. Keurig isn’t saying much about the mechanism itself, presumably in the hopes of obscuring it from aspiring coffee pirates.

When the Keurig employee tried to use an old-model pod, one without a new ink marker on the foil top, the brewer wouldn’t run. "Oops!" read a message on the touchscreen display, explaining that the machine only works with specially designed pods and directing the user to a Keurig website and helpline. The employee wouldn’t elaborate on how it worked, except to say that the ink is proprietary and inspired by counterfeiting technology used by the US Mint. Ian Tinkler, Keurig’s vice president of brewer engineering, went into a bit more detail, explaining that an infrared light shines on the ink marking and registers the wavelength of the light reflected back.

Keurig’s reticence is understandable. In addition to copycat pod makers, Keurig must contend with the many gigantic food conglomerates that are angling for a piece of the lucrative single-cup coffee market. Starbucks, Nestle, Kraft Foods, and other companies have all taken stabs at the single-cup industry. Many would-be competitors ended up partnering with Keurig to package their grinds in its K-Cups. That Keurig, a far smaller company, has been able to keep them at bay is a testament to the fact that though it only does one thing, it does it well — and to the power of the first-mover advantage.

Keurig’s first beachhead was in the office in the early 2000s, according to Murray Carpenter, the author of Caffeinated, where the machines provided a welcome alternative to "the bitter overcooked coffee everyone dreaded." A single-cup machine is the aesthetic opposite of the pour-over method currently popular in high-end cafes, but an important part of the appeal is the same: you know the cup you’re drinking is fresh. Where a barista achieves this freshness by grinding the beans in front of you and pouring scalding water over them immediately, Keurig achieves it by grinding beans in a factory, flushing them with nitrogen, and sealing them into airtight capsules. Oxidation is what makes coffee go stale, so even though months may pass between grinding and brewing, K-Cup coffee still tastes fairly fresh.

The other appeal, of course, is convenience. There is nothing really required of you but popping in the pod, pressing a button, and tossing the spent cartridge in the trash. The results are rarely spectacular, and the entire concept is an ecological nightmare — but the user-friendliness is hard to beat. It’s impossible to mess up.

As people became acquainted with the pods in the workplace, they started buying machines for their homes. The trend caught the attention of Green Mountain Coffee Roasters, which bought the company in 2006, at a valuation of $160 million. It was a bargain. The pod business boomed, even through the recession, despite the fact that pod coffee is relatively expensive. In pod form, coffee can cost roughly the equivalent of $50 a pound, depending on the variety. Thanks to its purchase of Keurig, Green Mountain went from being a midsize regional roaster to doing over $4 billion in sales last year. Ninety-two percent of that revenue came from pods and brewers. Reflecting its new focus, it changed its name to Keurig Green Mountain last March. 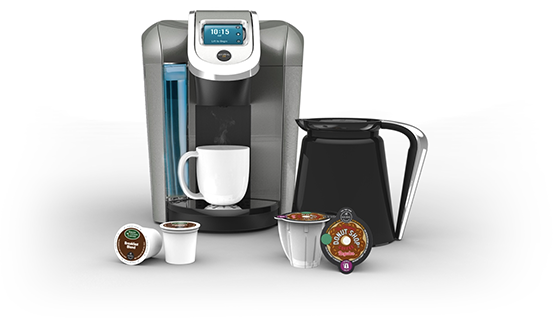 With its new machine, Keurig is combining its two main product lines, the single-cup brewer and the carafe-brewing Vue. Keurig has also made a few smaller improvements, like the ability to adjust the strength of the coffee and an air pump that makes "fluffier" hot chocolate. The touchscreen interface is simple and intuitive. Despite having about 250 different types of pods, and now carafe and single-cup sizes, you still just pop in a cup and push a button.

It's digital rights management for coffee

The anti-counterfeiting system doubles as a way to distinguish between carafe-size pods and regular ones. If the sensor detects the green dot that marks carafe cups, it brews a large pot. If it detects the ring of black symbols on the standard pod, it brews a smaller cup. If it doesn’t detect a Keurig-approved marking at all, it tells you "oops!"

When Keurig first announced its intention to design a lockout mechanism earlier this year, two companies that make unlicensed pods sued it for anticompetitive practices. The CEO of Treehouse Foods, one of the third-party pod makers, has promised to reverse engineer the brewer and design compatible pods within "months." Mitch Stoltz, a staff attorney with the Electronic Frontier Foundation, told Ars Technica that making pods more technically difficult to mimic would probably be only a short-term fix. "If this thing goes to market, probably within a day people will have figured out how to break it," Stoltz said. "They will take it as a challenge."

Fortunately for Keurig, the expiration of its cup patents doesn’t appear to have fazed its major corporate partners, which so far seem to still find it more lucrative to work within Keurig’s ecosystem than to tear it down and build their own. Keurig recently signed a deal with Coca-Cola to make a pod-based brewer for cold carbonated beverages, and another deal with Campbell's to make soup. In a Credit Suisse report for J.M. Smucker this month, it said that management chose to continue its licensing agreement with Keurig because it gave them access to a low-cost K-Cup manufacturer — and because it gave them a "peek under the tent" for the upcoming closed 2.0 system.

Keurig’s patents may have expired, but it’s still the company with the biggest pod-making infrastructure and the most machines in the most homes. Would-be competitors trying to capitalize on the apparently insatiable thirst for instant caffeinated beverages (and possibly soup) may continue to find it easier to partner with Keurig instead. In that light, the new machine’s DRM doesn’t have to be unbreakable — it just has to be good enough to make it easier to work with Keurig rather than against it.