Microsoft is busy preparing a second update to Windows 8.1, but the company is largely focused on a larger "Windows 9" release due next year. ZDNet reports that a preview of codename Threshold — which may or may not be named Windows 9 once it’s released — will be available later this year. The public preview is said to arrive in the fall, shortly after Windows 8.1 Update 2 is delivered to existing machines. Microsoft had been planning to bring the Start Menu back with Update 2, but the company is now planning to deliver that change with Threshold. 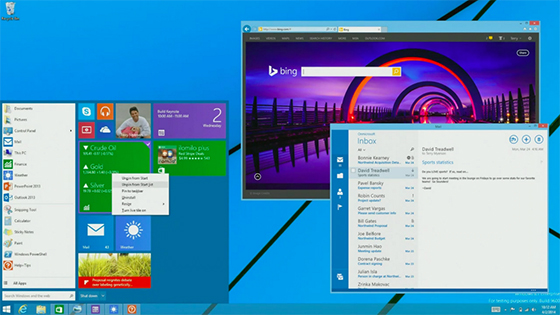 Microsoft originally revealed a concept for its upcoming Start Menu at its Build developer conference earlier this year, and the final version will ship with a more refined interface. The concept includes Live Tiles floating in the Start Menu, providing access to traditional and "Metro-style" applications. Microsoft is also planning to allow "Metro-style" apps to float on the desktop in windows, much the same way that traditional x86 applications do today. Both changes are planned for "Windows 9," and a separate combination of Windows Phone and Windows RT will provide the basis for a mobile version designed without a desktop mode in place.

Meanwhile, Windows 8.1 Update 2 is expected to arrive as part of Microsoft’s monthly security patches in August. The update will include the usual bug fixes, and improvements for upcoming hardware ahead of the holiday season. Windows' 8.1 Update included a number of interface changes and functionality tweaks, and Update 2 is expected to include some additional minor interface tweaks.

More from this stream Windows 10: everything you need to know