iOS 8 is the dramatic redesign that iOS 7 promised

iOS 8 is the dramatic redesign that iOS 7 promised

It’s been 51 weeks since Tim Cook introduced the world to iOS 7’s "stunning new user interface." We thought then that the radical redesign of iOS would be the biggest update in the platform's history. But in some ways, we were wrong. While iOS 7 brought a massive change in aesthetic direction, it remained functionally similar to its predecessors. iOS 8, on the other hand, is a subtle but important overhaul of the most important thing about the design of Apple's mobile OS: the way you use it.

The beauty of iOS has always been its simplicity. Apple gave users a springboard of app icons and taught them to jump in and out of apps to get things done. The introduction of the App Store with iOS 2, multitasking with iOS 4, and Notification Center with iOS 5 certainly shook things up, but the core paradigm remained. Many designers, including Apple’s Jony Ive, strive to make things simple, following functionalist principles of "less is more." But by not acknowledging a shift in the way people use their devices, iOS began to feel like it was stuck in the past.

By not acknowledging a shift in the way people use their devices, iOS started to feel stuck in the past

Thanks largely to the App Store, we all use third-party apps — millions of them. We shoot and tinker in VSCO Cam, we share with Instagram, meaning something as simple as editing and uploading a photo on iOS presently means trawling through multiple applications. That’s just one example. Everyone has their own workflows, their own ways of keeping in touch with friends, sharing information, and getting things done. Apple added white space to apps and switched to cleaner fonts in iOS 7, both of which improved the overall user experience, but that improvement is lost when we’re required to jump through hoops to perform basic actions. In the meantime, Microsoft and Google have strived to put third-party apps at the center of their OSes through systems like Android Intents and Windows Charms. With iOS 8 App Extensions, Apple is finally acknowledging that its age-old concepts of user behavior needed to be brought in line with its competitors’.

Third-party apps like Waterlogue and VSCO Cam can offer their filters within other apps.

App Extensions allow apps to interact with one another. This interaction can be as simple as editing a photo with VSCO Cam filters before sharing it — without leaving the Photos app — or as complex as translating a webpage in Safari using a third-party app like Bing. Extensions can also allow apps to act like widgets, letting users bid on an eBay auction or like an update on Facebook directly from the Notification Center. Apple is yet again taking simple ideas that can be found in Android and elsewhere and remixing them with aplomb.

Sharing information between apps is one of the cornerstones of the Android experience, and bringing that to iOS in an intelligent way will truly change the way you use an iPhone or iPad. This appropriation of features has been going on for years, and can be found elsewhere in Apple’s latest update, with third-party keyboards lifted from Android, self-destructive messaging from Snapchat, and better threaded conversations from WhatsApp finally coming to iOS 8.

With a shift in UX taken care of, iOS 8 also attempts to patch some holes in Apple’s new design language. The company made some missteps with iOS 7, both visually and mechanically. Some of those missteps were implicitly acknowledged: the iOS 7 Apple showed developers last June was quite different from the one it pushed to consumers months later. The system font was replaced between beta and commercial release, the incoming call screen was redesigned, and the shiny new Control Center was slightly decluttered, to name but a few changes.

Earlier this year, iOS 7.1 brought with it more refinement, as the shutdown screen changed significantly, the incoming call prompt was switched up again, animations were changed, and default apps saw a number of design tweaks to Jony Ive's original formula. But there were still niggling issues with 7.1, which 8 goes a long way towards addressing. The most significant fix comes to notifications. Just like in Android, they’re now actionable from either the lock screen or Notification Center. That’ll allow you to quickly respond to messages or accept calendar invites — something that’s always required you to jump into an app until now — but also facilitates more nuanced uses like swiping down on an email you don’t care about and quickly marking it as read. 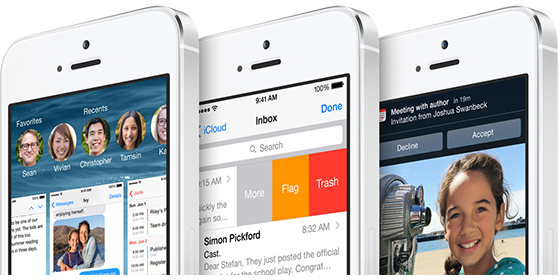 This revamp of notifications also reverts one of the more bizarre iOS 7 changes: the segmentation of "missed" and "all" notifications is no more. Another step backward — and forward — can be found in the App Store. Last year, Apple revamped the store to bring it in line with the rest of its new OS, introducing cleaner graphics and acres of white space. At the same time it switched to a nonsensical pagination system for search results that displayed only a single app at a time. It should come as no surprise that the announcement of something as simple as infinitely scrollable search results for iOS 8 got one of the loudest cheers of Monday’s keynote from developers.

Despite the improvements, things aren’t perfect. The touch targets that clear messages from Notification Center are still perplexingly small, the icons for Newsstand, Camera, and other apps are as polarizing as ever, and the reliance on transparency and animations to add depth and motion will still not sit well with some. But those unhappy with last year’s redesign will have to come to terms with the fact that their taste in software design doesn’t gel with Jony Ive’s. Despite the changes and concessions, Apple has generally stuck to its new aesthetic, building on and tweaking it to improve usability. It’s also bringing much of that redesign to OS X, rebalancing its two operating systems after a year of severe style clashes and backing it up with a real focus on continuity between desktop, mobile, and tablet.

Apple is moving in the right direction again

Last year we mused that the raw materials for a cohesive and useful operating system were hidden behind iOS 7’s bright icons and glimmering transparencies. That potential is now beginning to be fulfilled. There’s a lot of work left to be done before iOS feels as revolutionary as it once did, but Apple is moving in the right direction once again.