Textual healing: are apps the future of therapy?

Textual healing: are apps the future of therapy?

One company wants to connect patients and therapists on smartphones, but not everyone's convinced the idea has merit

Compared with finding a therapist in a big city, signing up for text-message therapy was a breeze. All I had to do was open an app on my phone, pick a username, and type my first message. Predictably, the first thing I wrote my new therapist was a question: "Hi. How does this work? Do I just tell you about myself?"

The app is an iOS-only release called Talkspace. Launched in March, it aims to connect users to their very own licensed therapist, and then have the two communicate via instant message. "We aren't going to ask you a ton of questions," says Talkspace co-founder Oren Frank, an assertive, good-natured Israeli who used to be the global chief creative officer at marketing agency MRM Worldwide. "We want to get you to talk to the therapist as quickly as possible." That's why the company doesn't ask potential users to fill out lengthy questionnaires about their mental health history before giving them access to a private therapy room — a Whatsapp-like encrypted platform that only a user and their therapist can enter.

"It's crazy that some people don't have access to therapy today."

"It's crazy that some people don't have access to therapy today," says Frank, who founded the company with his wife, Roni Frank, in 2012. "Our vision together was to turn a product that caters to the 1 percent into something that is available to everyone." That vision started as web-based platform called Talktala, but the company has since changed its name to Talkspace and gone mobile. Their app offers unlimited text-therapy to adults, with various price tiers: subscribers pay $49 for a week, $99 for a month, or just over $620 for a year of unlimited, around-the-clock therapy.

"Some users suffer from self-harm — cutting — so they can write to our therapist and say, ‘I have an urge to cut myself now, what should I do?'", says Roni Frank, a former computer scientist turned therapist. "There's nothing else out there like that." She thinks the immediacy that's built into the app is beneficial for people in crisis. But as online therapy startups like Talkspace grow in popularity and credibility — other companies include eTherapi and eTherapy Nexus, and Talkspace recently raised $2.5 million in funding — some mental health professionals are voicing concerns about the lack of research supporting e-therapy's effectiveness, and the legal implications for users who choose to partake.

"What we know is that truly meaningful therapeutic relationships need to have lots of depth and lots of breadth with regards to sustained engagement over time," says Frederic Reamer, a professor of social work at Rhode Island College. According to Reamer, an app like Talkspace could be useful as a gateway to further in-person therapy. But as far as a meaningful therapeutic alliance goes, that's something that "text messaging in and of itself is unlikely to afford."

Talkspace currently counts a few thousand subscribers, 80 percent of whom reside in the US. Of those users, 70 percent are women between the ages of 30 and 35. Most tend to subscribe for three to five months at a time, Oren Frank says, and many interact with their therapists three to four times a day.

But Talkspace shouldn't be a form of therapy on its own, says Madalina Sucala, a clinical psychologist at the Icahn School of Medicine at Mount Sinai who has researched how clinicians feel about e-therapy. "It's a platform where therapists can meet and talk with their clients," she says. And that kind of platform can make dispensing effective therapy difficult. "Developing a relationship with your patients in online therapies can be a problem because you can't see emotional cues," she says, "and sometimes you can't convey empathy."

Reamer agrees, and thinks potential users should consider what it means to interact with a therapist who can't see you. "If you say something and it just moves me profoundly and I start crying, you don't see the crying, the grimace, the visual cues that are present in a traditional clinical relationship," he says, "so there are limitations — not to mention the possible tech failures, like a dead battery," that could arise at an inopportune therapeutic moment.

A Talkspace therapist I spoke to — not the one I interacted with online — disagrees. "It's is a great concept and it's the way of the future," says Christy Paul, who also trains many of the company's new recruits (each therapist undergoes a month of training with subsequent follow-ups). In fact, she thinks users experience the additional benefit of using the app like a diary. In addition to very serious crises, "pretty much every issue we can work through with our users online," she says, "[and] we get a lot of positive [user] feedback."

The app also offers therapists the convenience of online correspondence, Paul says, and the chance to work with diverse populations they might not encounter in their home city. But there can be a downside to making yourself available around-the-clock. "Part of the training that I do with the clinicians is making sure that they do have boundaries," Paul says. "It's also for the users sake, because being so dependent on somebody isn't healthy."

My own Talkspace therapist set boundaries right away. She explained during the free trial that I could write her whenever I felt the need, and that she would try to answer within 15 minutes, if only to acknowledge my message. She also cautioned that she would mostly be available in the evenings, because she works a full-time job during the day. "But I do try to check my messages throughout the day for people who might be in crisis," she wrote. 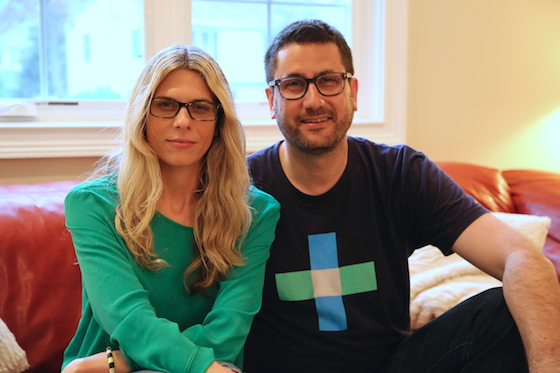 Oren and Roni Frank told me that every therapist operates differently, and that each approach is largely the product of previous training — some are psychologists and others are social workers — and individual schedules. But the idea behind the app remains the same no matter which therapist you end up with: the therapy room is always open, and you always have a direct, private, and anonymous line to your therapist.

anonymity can be a useful therapy tool

And that anonymity is an extremely useful therapy tool, Oren Frank says. "Face-to-face meetings can be difficult, because you feel judged and the stigma is high." By keeping users anonymous, Talkspace hopes to alleviate the stigma that currently prevents 28 percent of people who need mental health care, but don't receive treatment, from finding a therapist. It might also mean that users open up more quickly. "Something about writing," Oren Frank says, "allows people to be more forthcoming."

The impact of text therapy has largely been ignored by researchers, and existing studies mostly treated it as a supplement to face-to-face therapy, not a stand-alone intervention. But, according to a small 2013 study, the value of text therapy is similar to face-to-face therapy and can even be "more positive than previous face-to-face evaluations." Researchers posited that this was because clients experienced lower "postsession arousal" — meaning they were calmer following the online sessions versus those conducted in-person. They did, however, describe that hypothesis as "very tentative" and suggested that text-therapy might not be suitable for people who suffer from more serious mental health issues.

lawyers could get a hold of entire therapy transcripts

But Reamer, who often acts as an expert witness in legal proceedings, takes the discomfort surrounding text therapy one step further. He thinks that people involved in court cases, such as custody battles, should stay away from the app. "If their partner knows that they have major psychological issues, their lawyer would try to get a hold of their therapeutic records," he says, adding that lawyers involved in a medical malpractice suit might also try to get a user's records to prove they were depressed before a medical event occurred. "If you received three-months of counseling via text messaging, I can guarantee that those records will be asked for." And those records will be a lot more extensive than the notes a clinician takes in-person.

So far, Talkspace hasn't encountered lawyers seeking records, Oren Frank says. But if it did, the company would likely have to comply with the law "just like any other therapist would." That, the co-founder says, might mean turning over six month's of a user's therapy transcript. "Digital environments have their issues," Oren Frank says, "so we tried to find a balance." That balance consists of allowing users to access their last six months and deleting the rest.

The approach might not be perfect, but Talkspace does offer a number of advantages: It's cheaper than most therapy appointments, and it offers the kind of anonymity many of us crave. The diary-style log also has a certain appeal. But the app's greatest selling point might be its convenience. Finding time for a 60-minute appointment once a week is often a struggle — but with Talkspace, "users can communicate on the go," Roni Frank says. When something goes awry, their therapist can "help them in that moment to reduce their anxiety and the damage it can cause."

the app's greatest selling point might be its convenience

That factor is key in enticing a generation raised on text messages and emails, says Susan Ringwood, chief executive at Beat, a UK organization that supports people affected by eating disorders. "I think it's really important that we maximize this technology," Ringwood says, noting that 95 percent of the people who contact Beat now do so online. "Some people are worried it's not personal enough, but plenty of young people aren't getting help at all, so at least this is something that will engage them."

My own experience with Talkspace was mixed. I had initially planned to subscribe for a full week, but after four days of light, asynchronous texting with my therapist, I thought of ending my experiment. Other than the fact that my therapist used far less punctuation than I would have liked (ending questions with actual question marks is strongly recommended in my book), she did come off as approachable and empathetic, and answered most of my messages within the hour. Still, I hesitated.

Something about the permanence of typing private thoughts in a scrollable chatroom made me uneasy, and communicating intimate details of my life to someone whose facial expressions I couldn't read offered little comfort. Text-therapy might very well be a fix for many, but it clearly wasn't going to work for me. A human with a pen in one hand and and a notepad in the other seemed like a much safer and more effective option — provided that her office is located within 20 minutes of work, her sessions are reasonably priced, and she's available between 6:30PM and 7:30PM every other Tuesday.