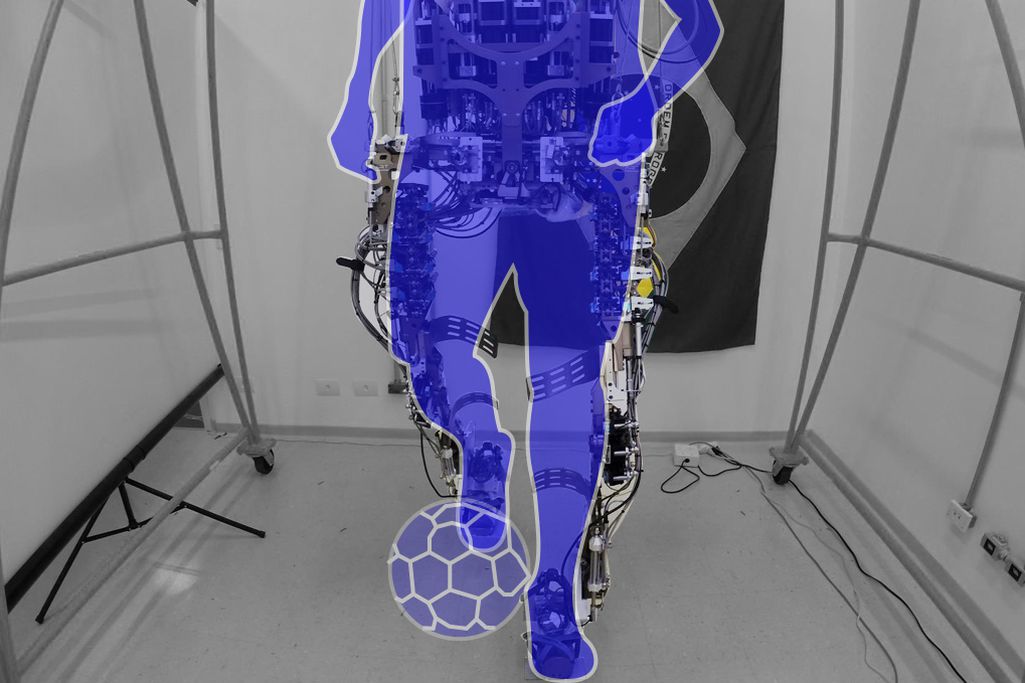 Next week at the World Cup, a paralyzed volunteer from the Association for Assistance to Disabled Children will walk onto the field and open the tournament with a ceremonial kick. This modern miracle is made possible by a robotic exoskeleton that will move the user's limbs, taking commands directly from his or her thoughts.

This demonstration is the debut of the Walk Again Project, a consortium of more than 150 scientists and engineers from around the globe who have come together to show off recent advances in the field of brain machine interfaces, or BMI. The paralyzed person inside will be wearing an electroencephalographic (EEG) headset that records brainwave activity. A backpack computer will translate those electrical signals into commands the exoskeleton can understand. As the robotic frame moves, it also sends its own signals back to the body, restoring not just the ability to walk, but the sensation as well.

Just how well the wearer will walk and kick are uncertain. The project has been criticized by other neuroscientists as an exploitative spectacle that uses the disabled to promote research which may not be the best path for restoring health to paralyzed patients. And just weeks before the project is set to debut on television to hundreds of millions of fans, it still hasn’t been tested outdoors and awaits some final pieces and construction. It's not even clear which of the eight people from the study will be the one inside the suit.

The point of the project is not to show finished research, however, or sell a particular technology. The Walk Again Project is meant primarily to inspire. It's a demonstration that we’re on the threshold of achieving science fiction: technologies that will allow humans to truly step into the cyborg era.

It’s only taken a little over two centuries to get there.

Scientists have been studying the way electricity interacts with our biology since 1780, when Luigi Galvani made the legs of a dead frog dance by zapping them with a spark, but the modern history behind the technology that allows our brains to talk directly to machines goes back to the 1950s and John Lilly. He implanted several hundred electrodes into different parts of a monkey’s brain and used these implants to apply shocks, causing different body parts to move. A decade later in 1963, professor Jose Delgado of Yale tested this theory again like a true Spaniard, stepping into the ring to face a charging bull, which he stopped in its tracks with a zap to the brain.

"What we want to do is listen to these brain symphonies and try to extract them from the messages they carry."

In 1969, professor Eberhard Fetz was able to isolate and record the firing of a single neuron onto a microelectrode he had implanted into the brain of a monkey. Fetz learned that primates could actually tune their brain activity to better interact with the implanted machine. He rewarded them with banana pellets every time they triggered the microelectrode, and the primates quickly improved in their ability to activate this specific section of their brain. This was a critical observation, demonstrating brain’s unique plasticity, its ability to create fresh pathways to fit a new language. 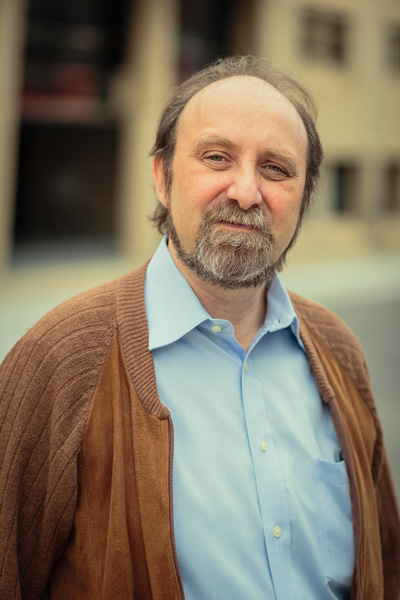 Today, BMI research has advanced to not only record the neurons firing in primates’ brains, but to understand what actions the firing of those neurons represent. "I spend my life chasing the storms that emanate from the hundreds of billions of cells that inhabit our brains," explained Miguel Nicolelis, PhD, one of the founders of Center for Neuroengineering at Duke University and the driving force behind the Walk Again Project. "What we want to do is listen to these brain symphonies and try to extract them from the messages they carry."

Nicolelis and his colleagues at Duke were able to record brain activity and match it to actions. From there they could translate that brain activity into instructions a computer could understand. Beginning in the year 2000, Nicolelis and his colleagues at Duke made a series of breakthroughs. In the most well known, they implanted a monkey with an array of microelectrodes that could record the firing of clusters of neurons in different parts of the brain. The monkey stood on a treadmill and began to walk. On the other side of the planet, a robot in Japan received the signal emanating from the primate’s brain and began to walk.

Primates in the Duke lab learned to control robotic arms using only their thoughts. And like in the early experiments done by Fetz, the primates showed a striking ability to improve the control of these new limbs. "The brain is a remarkable instrument," says professor Craig Henriquez, who helped to found the Duke lab. "It has the ability to rewire itself, to create new connections. That’s what gives the BMI paradigm its power. You are not limited just by what you can physically engineer, because the brain evolves to better suit the interface." 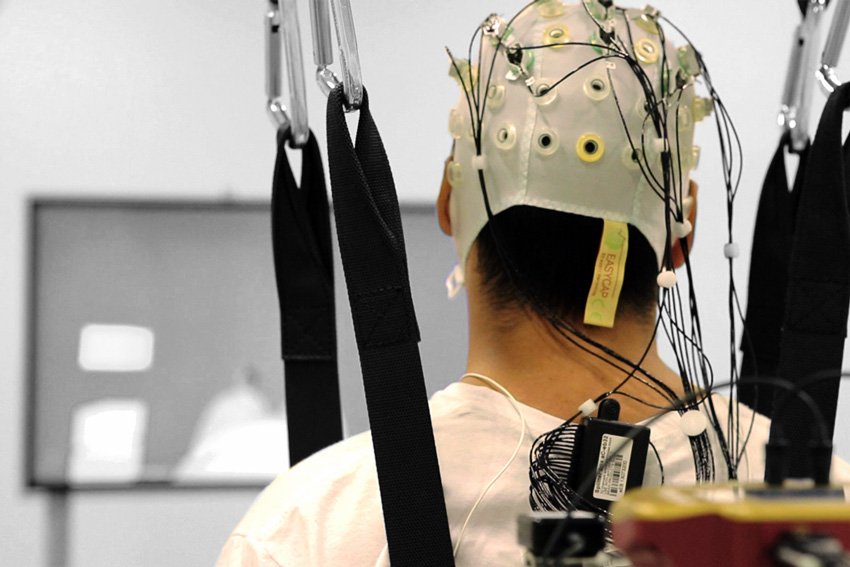 After his success with primates, Nicolelis was eager to apply the advances in BMI to people. But there were some big challenges in the transition from lab animals to human patients, namely that many people weren’t willing to undergo invasive brain surgery for the purposes of clinical research. "There is an open question of whether you need to have implants to get really fine grained control," says Henriquez. The Walk Again Project hopes to answer that question, at least partially. While it is based on research in animals that required surgery, it will be using only external EEG headsets to gather brain activity.

The fact that these patients were paralyzed presented another challenge. Unlike the lab monkeys, who could move their own arms and observe how the robot arm moved in response, these participants can’t move their legs, or for many, really remember the subconscious thought process that takes place when you want to travel by putting one foot in front of the other. The first step was building up the pathways in the brain that would send mental commands to the BMI to restore locomotion.

To train the patients in this new way of thinking about movement, researchers turned to virtual reality. Each subject was given an EEG headset and an Oculus Rift. Inside the head-mounted display, the subjects saw a virtual avatar of themselves from the waist down. When they thought about walking, the avatar legs walked, and this helped the brain to build new connections geared towards controlling the exoskeleton. "We also simulate the stadium, and the roar of the crowd," says Regis Kopper, who runs Duke’s VR lab. "To help them prepare for the stress of the big day."

"The brain is a remarkable instrument. It has the ability to rewire itself."

Once the VR training had established a baseline for sending commands to the legs, there was a second hurdle. Much of walking happens at the level of reflex, and without the peripheral nervous system that helps people balance, coordinate, and adjust to the terrain, walking can be a very challenging task. That’s why even the most advanced robots have trouble navigating stairs or narrow hallways that would seem simple to humans. If the patients were going to successfully walk or kick a ball, it wasn’t enough that they be able to move the exoskeleton’s legs — they had to feel them as well.

The breakthrough was a special shirt with vibrating pads on its forearm. As the robot walked, the contact of its heel and toe on the ground made corresponding sensations occur along parts of the right and left arms. "The brain essentially remapped one part of the body onto another," says Henriquez. "This restored what we call proprioception, the spacial awareness humans need for walking."

In recent weeks all eight of the test subjects have successfully walked using the exoskeleton, with one completing an astonishing 132 steps. The plan is to have the volunteer who works best with the exoskeleton perform the opening kick. But the success of the very public demonstration is still up in the air. The suit hasn’t been completely finished and it has yet to be tested in an outdoor environment. The group won't confirm who exactly will be wearing the suit. Nicolelis, for his part, isn’t worried. Asked when he thought the entire apparatus would be ready, he replied: "Thirty minutes before." 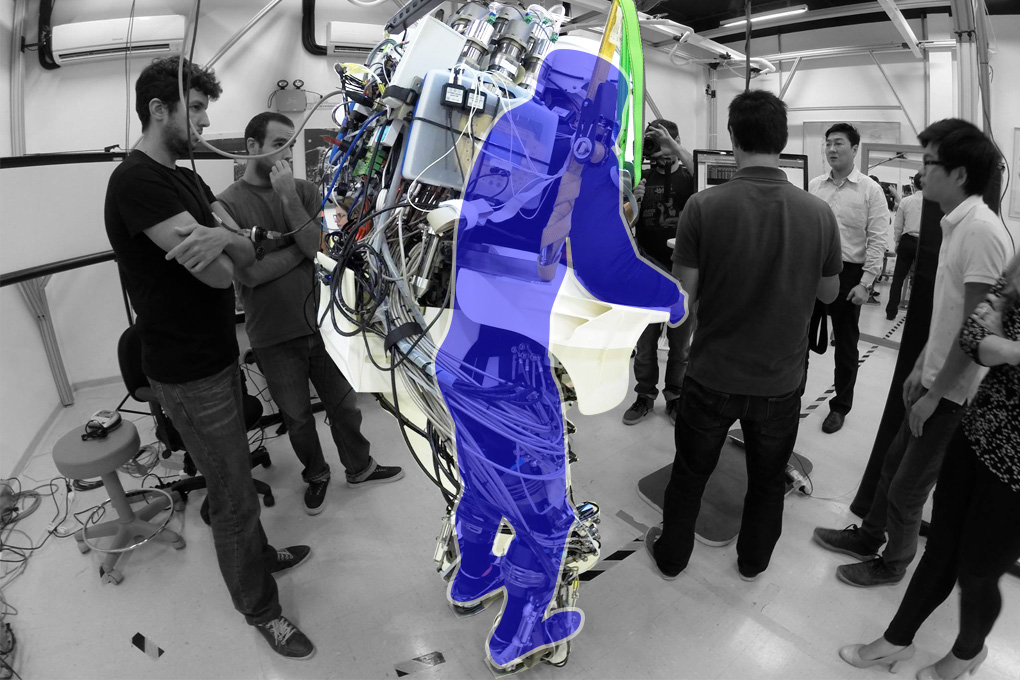 The Walk Again project may be the most high-profile example of BMI, but there have been a string of breakthrough applications in recent years. A patient at the University of Pittsburgh achieved unprecedented levels of fine motor control with a robotic arm controlled by brain activity. The Rehabilitation Institute of Chicago introduced the world’s first mind controlled prosthetic leg. For now the use of advanced BMI technologies is largely confined to academic and medical research, but some projects, like DARPA’s Deka arm, have received FDA approval and are beginning to move into the real world. As it improves in capability and comes down in cost, BMI may open the door to a world of human enhancement that would see people merging with machines, not to restore lost capabilities, but to augment their own abilities with cyborg power-ups.

Would you amputate functional limbs if it were possible to replace them with stronger, more versatile mechanical appendages?

"From the standpoint of defense, we have a lot of good reasons to do it," says Alan Rudolph, a former DARPA scientist and Walk Again Project member. Rudolph, for example, worked on the Big Dog, and says BMI may allow human pilots to control mechanical units with their minds, giving them the ability to navigate uncertain or dynamic terrain in a way that has so far been impossible while keeping soldiers out of harms way. Our thoughts might control a robot on the surface of Mars or a microsurgical bot navigating the inside of the human body.

There is a subculture of DIY biohackers and grinders who are eager to begin adopting cyborg technology and who are willing, at least in theory, to amputate functional limbs if it’s possible to replace them with stronger, more functional, mechanical ones. "I know what the limits of the human body are like," says Tim Sarver, a member of the Pittsburgh biohacker collective Grindhouse Wetwares. "Once you’ve seen the capabilities of a 5000psi hydraulic system, it’s no comparison."

For now, this sci-fi vision all starts with a single kick on the World Cup pitch, but our inevitable cyborg future is indeed coming. A recent demonstration at the University of Washington enabled one person’s thoughts to control the movements of another person’s body — a brain-to-brain interface — and it holds the key to BMI’s most promising potential application. "In this futuristic scenario, voluntary electrical brain waves, the biological alphabet that underlies human thinking, will maneuver large and small robots, control airships from afar," wrote Nicolelis. "And perhaps even allow for the sharing of thoughts and sensations with one individual to another."