Pepper will go on sale for under $2,000 in February

SoftBank CEO and Sprint chairman Masayoshi Son has announced a surprising new direction for his illustrious career: the field of humanoid robotics. At a press conference in Tokyo, Son revealed a human-like robot called Pepper that is capable of playing multiple roles from babysitter to store staff. Pepper introduced itself by bowing in the Japanese fashion before posing and encouraging the audience to take more photos.

Son describes Pepper as the "world's first personal robot with emotions." The robot is said to learn from human interaction and behavior, uploading its experiences to a cloud AI system for other units to use. This is designed to teach the robot quickly how to act in a natural manner. Son drew a distinction between Pepper's "emotion engine" and the standard programming of other humanoid robots.

Pepper is 4-feet tall and 62 pounds with a tablet-style display on its chest and fully articulated arms that move in a lifelike manner. The robot doesn't have legs, however, looking more like a mermaid on wheels. Pepper appeared to engage Son in natural-sounding Japanese, but it's hard to tell how much was being processed in real time. Pepper has around 12 hours of battery life, according to Son.

The robot is the result of a collaboration between SoftBank and French company Aldebaran Robotics, which has produced models like the Nao and the Romeo. SoftBank took a majority stake in Aldebaran in 2012. The Nikkei newspaper reported earlier that production will be outsourced to Foxconn; founder Terry Gou joined Son onstage to express his support for the project. 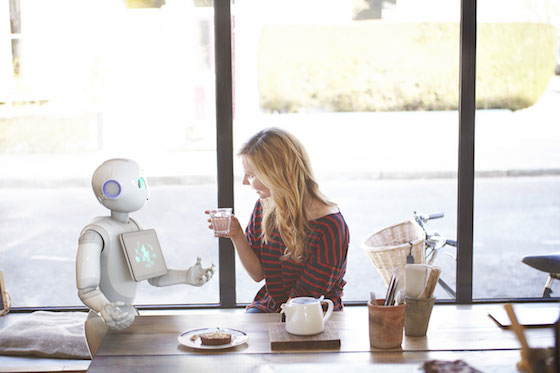 This is Son's first foray into robotics, but the development is in line with his desire to produce technology to address major issues facing Japan. He has previously been an outspoken advocate for aggressively pursuing green energy to replace the country's nuclear power plants, for example, and announced a move into healthcare with SoftBank. Nikkei reports that SoftBank will develop a robot to assist with care for the elderly at some point in the future.

SoftBank will place Pepper units in two Tokyo stores from tomorrow before rolling them out to the rest of the country. Perhaps the most notable element of Pepper is the price: it will go on general sale in February for ¥198,000, or around $1,930, for the base unit.