Nintendo of America president Reggie Fils-Aime attended my wedding. His date was Piper Chapman, the main character from Orange is the New Black, who's also really good friends with my one-and-a-half year old daughter Charlotte. My kid lives on her own, in an apartment that looks like the bottom of the ocean, and just this morning she got really excited when I gave her a rhino horn to wear on her head.

Tomodachi Life for the Nintendo 3DS is the kind of game that's hard to explain. Even calling it a “game” seems wrong. It looks a bit like The Sims starring your Mii avatar, but really it's a mixture of a virtual pet and a toy — sort of like a Tamagotchi filled with tiny humans that like to play games. It’s also unlike anything you’ve ever played. Nintendo is typically a conservative company that relies on sequels to known franchises like Mario Kart and The Legend of Zelda. But it’s also a developer that knows how to get weird with games like WarioWare, and Tomodachi Life might just be the weirdest thing it's ever made. 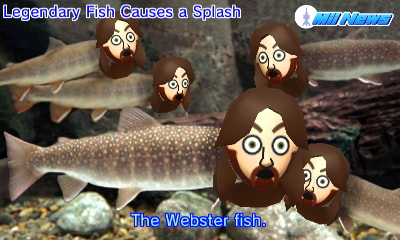 Two bros building a sand castle on the beach 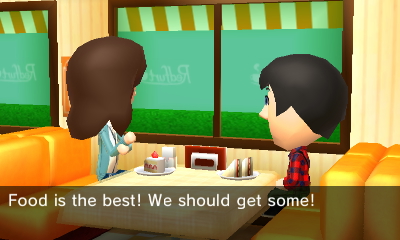 The game takes place on a bright, sunny pre-built island, which eventually becomes home to a host of Miis. While your cute little avatar is the island's first resident, you actually play as yourself in the real world, and not your Mii — a sort of omnipotent god that likes to tinker with the lives of the islanders. You feed them, buy them new clothes, and just generally help when they have a problem. When they're sick, it's you who gives them cold medicine, and when they're in love it's your job to give advice on asking their crush out on a date.

That's all pretty normal life-sim stuff, but Tomodachi Life is far from normal. You have surprisingly little control over your Miis, for one thing. You can make sure they're happy, but you have no real control over what they do or when. You might stop by an apartment and see a few islanders crowded around a Wii U, or you might find two bros building a sand castle on the beach. These sequences aren't interactive — essentially you're just setting the stage, and then watching how things play out. Outside of solving problems, your interaction with the world largely involves mini-games, whether it’s tossing a frisbee with some Miis in the park or playing a guessing game to test your knowledge of the island’s residents.

The results are almost always entertaining, especially because you can build and import any Mii you want. My island was a mix of family, celebrities, and fellow game reporters, which resulted in quite a few oddball scenarios. IGF chairman Brandon Boyer, for instance, took an instant liking to my wife. Whenever I would tell him they were a bad match, he'd get sad, and I had to feed him lots of ice cream to lift his spirits. Eventually he turned his attention to New Zealand songstress Lorde.

Tomodachi Life is a bit like Nintendo's other life-sim Animal Crossing, in that it's best enjoyed in small doses. Even with a dozen or so islanders, checking in and solving everyone's problems will probably take you less than half an hour. New problems arise throughout the day, of course, and there are regularly scheduled events that you can check in on. Every morning there's a farmer's market where you can buy ramen or pancakes, and at 6:00PM sharp there's a rap battle near the fountain, where you can watch Miis trade rhymes. Every night at the amusement park an arcade machine opens up, where you can play a simplified version of Final Fantasy starring island residents. 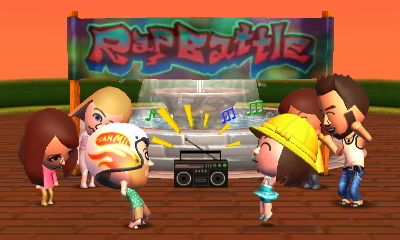 At 6:00PM sharp there's a rap battle near the fountain 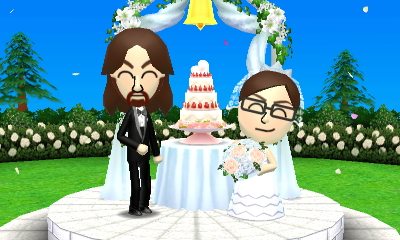 Many of these activities don't really have a reward of any sort, they're just fun to watch. The closest thing Tomodachi Life has to a goal is that two Miis can get married — though only men and women can get hitched, unfortunately — and move into a house and eventually have some kids.

That lack of any solid, tangible goal makes Tomodachi Life less of a game and more of a toy — sure, you're unlocking content by completing tasks, but it's just to open up new toys to play with. Being able to eavesdrop on conversations at the local cafe doesn't help me progress through the game, but it's still one of my favorite things to do. I found myself really caring about my Miis — I knew all of their quirks, like who likes ice cream and who hates spaghetti, and the way they actually talked to me directly made me feel like a part of this weird virtual world.

It's also an incredibly sharable game, which makes the weird moments all the more special — there's not much point in seeing a friend dream about being a hermit crab in a race against Kanye West if you can't share it with the world. You can snap pictures at almost any time, and then share them on Twitter, Facebook, or Tumblr. Likewise, players can share Miis by making QR codes that can be scanned into the game, so that you can easily import friends or just about anybody to your island (Nintendo has a small selection of pre-built celebrities to get you started, including Shaq and Christina Aguilera).

Tomodachi Life won't let you build the perfect virtual life like in The Sims. But that's not really the point. It's the only way you can watch your best buddy doing yoga while living in a giant hamster cage and wearing a motorcycle helmet, and that's pretty special. Now if you'll excuse me, I need to go hypnotize my wife.