Europe's war on refugees: 'We live like animals here'

After fleeing war-torn homelands, stateless refugees are stuck in limbo

Jan Khan has less than 24 hours before the police come to destroy his home, but he doesn't seem too worried. It's a drizzly Thursday afternoon, and he's playing a pickup game of cricket with a group of other Afghans at a makeshift camp in Calais — a northern French port city that has become an important transit point for illegal immigrants looking to cross the English Channel and reach the UK. Many came to Europe hoping to find refuge from the war and violence that has ravaged their home countries. Instead, they've been left homeless and without legal protections, looking to England as a last hope for asylum.

Khan is 40, but he looks much older, with weathered skin and a crooked nose that he claims was broken by the French police. He says he fled Afghanistan seven years ago, as war-fueled violence began creeping into the village where he lived with his wife and three young children. He thought migrating to Europe would bring better fortunes, and hoped to one day rescue his family from the chaos back home. But those dreams have slowly dissipated. Khan has spent the last several years shuffling from one informal camp to another, across various countries in Europe, sleeping under makeshift tents and surviving on food from local aid groups. He hasn't spoken to his family in over a year. After nearly a decade of wandering and failing to attain legal status, he's found himself trapped in a state of purgatory, caught between the danger that still grows back home, and a Europe that has fallen far short of his expectations.

"How can I explain to you?", Khan asked me last Thursday. "I lost my life. Everyday I'm dead here."

Just a day earlier, he and about 700 other migrants — Afghans, Syrians, Sudanese, Eritreans — were forced to leave three nearby camps under orders from the regional government. About 300 French police stormed the sites and destroyed their tents, prompting some to make a last rush to sneak onto England-bound ferries. Local authorities cited "deplorable hygiene" as the primary reason for the operation, saying they disbanded the camps to control an outbreak of scabies — a contagious but treatable skin infection caused by a parasite — though humanitarian groups criticized it as nothing more than a show of force. The police offered to bus the migrants to regional shelters where they could shower, but many refused, fearing they'd be taken to a site far away from the port.

Instead, they set up a small camp here, at an outdoor food-distribution center run by a local charity called Salam. The site is located near the ferries that regularly traverse the English Channel, and directly across from a row of middle class apartment buildings. It's a short walk from the camps that were destroyed last week, continuing what has become a disturbing trend in Calais. In 2009, French and English authorities disbanded a major migrant camp known as "the jungle," but more have sprung up in its place, full of refugees, young and old, seeking passage to England.

Police vans were still stationed outside Salam on Thursday, but things were calm inside. Hundreds of people — all men — had gathered, some sleeping under piles of dirty blankets, others milling about, smoking cigarettes. A cluster of plastic-sheet tents had been erected on the far end of the site, next to a small row of faucets where people were bathing or washing clothes. A group of Afghans were singing traditional songs under one tent, while young Sudanese men batted around an old soccer ball. The wall of a large warehouse at the edge of the dock appeared to serve as the only toilet on site. 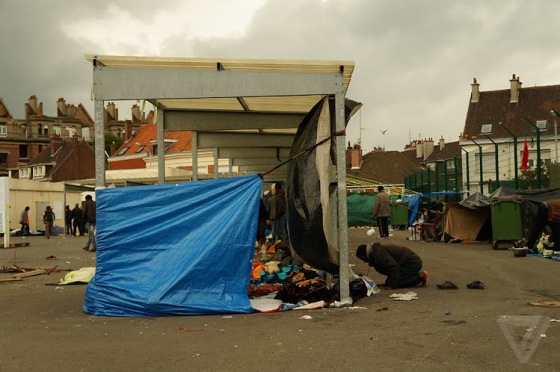 A migrant prays at a makeshift camp in Calais, France.

The geographic divides were clear — the African contingent was huddled in one corner, Syrians, Iraqis, and Afghans in another — but there were no obvious signs of tension or hostility. The police crackdown, it seems, forged even stronger ties among the various groups. "Yesterday we were talking about [how] we must live together," says Assad, a 21-year-old Sudanese man who fled his country in 2008. "We stay together because we know if we separate, police can come and do something to us."

Some migrants had been here for months or years, after failed attempts to cross the Channel, while others had only arrived last week. Yet the stories they recounted were largely the same. Their lives had been torn apart by war and violence back home, leaving them with no choice but to flee. A teenager from Darfur showed me the four bullet wounds he collected on his leg the night his father was killed by a militia. A 32-year-old Eritrean fled the army because of the horrific tasks he was ordered to carry out. He says returning would mean death, though attempting to cross the Channel carries its own risks. Earlier last month, a Sudanese migrant was killed after trying to sneak into England by hiding under a car.

Many migrants see hope in England

Official figures show that nearly 435,000 people applied for asylum in Europe last year — almost 100,000 more than the previous year — with the majority (50,000) coming from war-torn Syria. Most choose their destination based on connections or social networks they may have there, experts say, as well as perceived economic opportunities. They're also typically men — breadwinners who are expected to go out and find better fortunes for their families. Female migrants, by contrast, tend to travel with children, and therefore pose greater risks for smugglers crossing into Europe.

Those at Calais seemed hopeful that the UK would show them greater leniency, but that's not always the case, says Franck Düvell, senior researcher at Oxford University's Centre on Migration Policy and Society. Although England's asylum acceptance rate is higher than France's (34 percent to 17 percent), it's still far below Scandinavian countries, and the application process remains difficult to navigate.

"There is always a certain amount of people who perceive England as the motherland of democracy, rule of law, free law where you can express your opinion freely," Düvell says. "So for people who come from a refugee situation this is obviously very important, because finally they want to be in a free and democratic country." 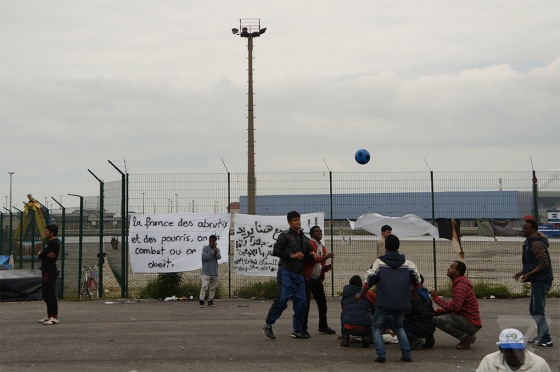 A group of migrants bat around a soccer ball along the port of Calais.

But the economic crisis has made it harder for migrants to find work in Europe, and right-wing politicians are looking to tighten up their borders. Last week's expulsion in Calais comes after right-leaning, anti-immigrant political parties made major gains in European parliamentary elections, a result that the French media described as an "earthquake." Far-right parties made significant gains in Austria, Denmark, and the UK, and performed especially well in France, where the Front National party claimed victory with 25 percent of the vote.

On Thursday afternoon, workers from Salam and Médecins du Monde, another humanitarian organization, convened a large meeting in the center of the campsite, gathering representatives from each nationality. The Friday deadline for their final expulsion was drawing near, and they needed a plan of action. The deliberations were long and at times arduous, with translators zig-zagging across at least four different languages, but the decision was resolute: they wanted to stay at the docks, and they wouldn't leave until they were guaranteed better living conditions.

It was a moment of remarkable optimism, peppered with rounds of applause and cheers, though their future remains unclear. The campground at Salam is intact today, a week after the deadline, but authorities in Calais have made clear their intent to disband all migrant settlements along the port.

The migrants I spoke with seemed nonchalant about the possible expulsion, and remained intent on crossing over to England, even if it entails more hardship. They acknowledged some uncertainty about what may await them on the other side of the water, though they all seemed guided by the same hope that things would be better than they are at the port of Calais, let alone the war zones they've left behind.

"We live like animals here," Khan said, before quickly correcting himself. "Animals live better than us, because animals have someone to look after them."