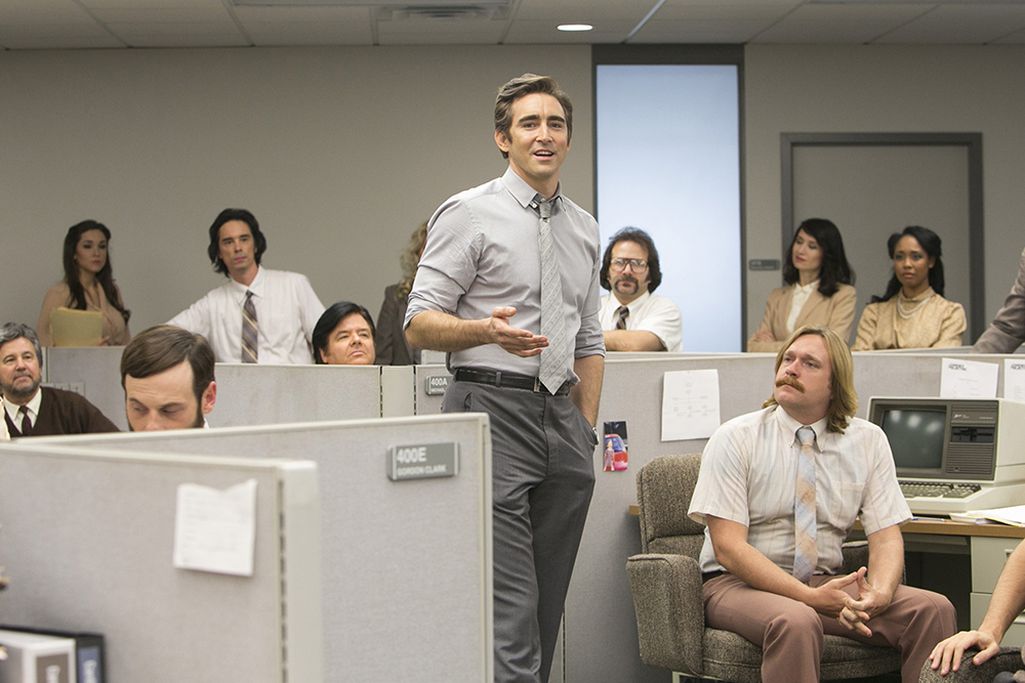 We love TV and we love recaps, but a lot of times it’s not the big-picture plot developments that make a show great. It’s the little things; the details of the dialogue, set design, props, and performance. For Close Up, we’ll be taking a look at the coolest moments and most interesting details in some of our favorite shows. Today we’re looking at the second episode of Halt and Catch Fire: “FUD.”

While the pilot laid out the set-up for Joe and Gordon’s PC-cloning scheme, the show’s second episode started diving into the ramifications. After our leads smoothly sidestep IBM’s attorneys, things are looking up. Joe is named the senior product manager of Cardiff’s new PC division, Gordon is provided a cushy office to start designing the hardware, and Cameron… well, Cameron is stuck in a dungeon of a “clean room” to write the code that will make the clone PC run — but at least all the pieces are in place.

But things soon start going sideways. Gordon is fascinated by Cameron in a more-than-mildly creepy way, going through her things behind her back and lying to his wife about her. Cameron, meanwhile, can’t work like a caged animal, and when Joe steps in to “help” the pair end up hooking up again (of course, that doesn’t prevent Joe from throwing another rage tantrum when he thinks Cameron isn’t working fast enough). Then IBM strikes back against Cardiff in the best way it can: it steals the company’s customers by undercutting them on price, leaving Cardiff with only enough revenue to keep the lights on for two more months. But after a shocking reveal and some smooth salesmanship, Joe manages to keep the team together — with plenty of fascinating details along the way. 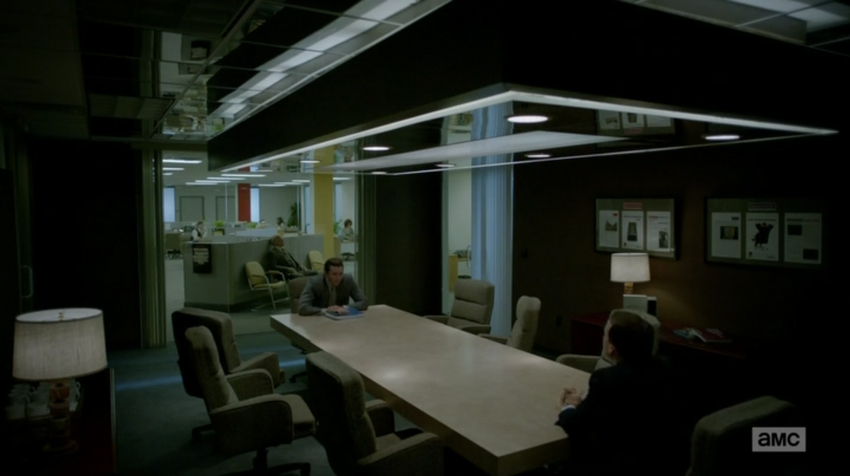 When confronted by an IBM executive name Dale (David Wilson Barnes), Joe launches into a cocky and well-rehearsed pitch laying out why a Cardiff PC clone won’t be illegal. "Cameron Howe will be completely isolated in a clean-room environment. She’ll have no contact with Gordon Clark or his reverse-engineering work. Any similarities in the code will be completely coincidental," he says. "Just like Columbia Data. Just like Compaq."

As you may have guessed, the show is referencing a bit of real-world history here. Columbia Data Products was a Maryland-based company, and in 1982 it released the MPC 1600 — an IBM PC clone. Much like Halt and Catch Fire, the "BIOS" computer code that made the MPC 1600 run had been created in a clean-room environment by CDP. In this case, the company used the specifications that IBM itself has actually published in a technical manual and worked backwards from there (Joe and Gordon theoretically could have gone this route as well, but a montage of looking up information in a manual isn’t nearly as cool as a montage of desoldering chips and a fancy light-up LED board). CDP has great success at first, but increased competition and razor-thin margins forced the company to file for bankruptcy protection several years later. Now based in Florida, the company currently specializes in data protection.

Compaq, on the other hand, was a Texas company started by former employees of Texas Instruments (the same place where Gordon’s wife works in Halt). In 1982 it introduced its first computer, the Compaq Portable, an IBM PC clone that used off-the-shelf parts and another reverse-engineered BIOS. ("Portable" was a relative term at the time, with the machine weighing 28 pounds). Compaq’s machines were widely regarded as being the most-compatible clones at the time, and Compaq continued to be a vital player in the PC market until it was swallowed up by HP in 2001. 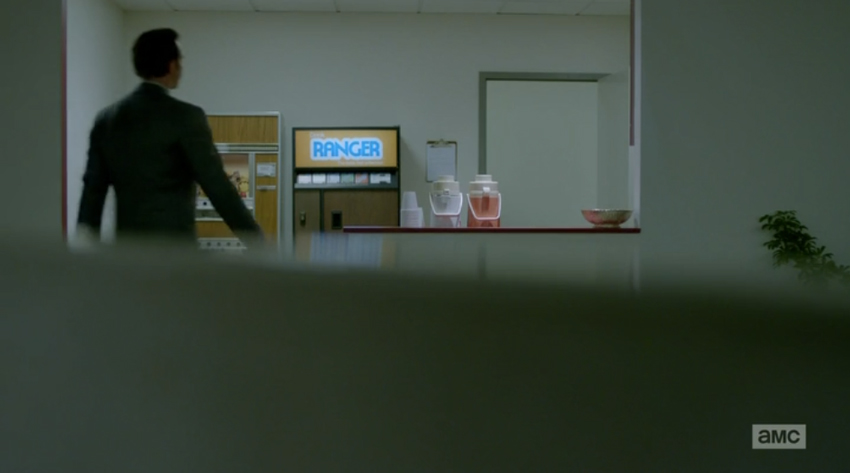 Gordon’s not the only one with a soda fixation; in "FUD" we see Cameron guzzling orange soda from a two liter at several points in the show. The brand? Ranger Orange soda. The show does a good job of artfully obscuring the brand name, with the bottle turned just so, or Cameron conveniently holding a marker that covers up everything but the word "orange." However, early in the episode Joe steps into the Cardiff Electric kitchen and there’s a Ranger Soda machine for all the world to see.

The only thing is, we did a little digging and couldn’t find any evidence of Ranger Soda actually existing. If you know otherwise, definitely let us know in the comments below, but for the time being it appears that Halt and Catch Fire has its own fictional soda company. As for where the name Ranger Orange came from… well, we’re just hoping it’s a thinly-veiled Power Rangers reference. 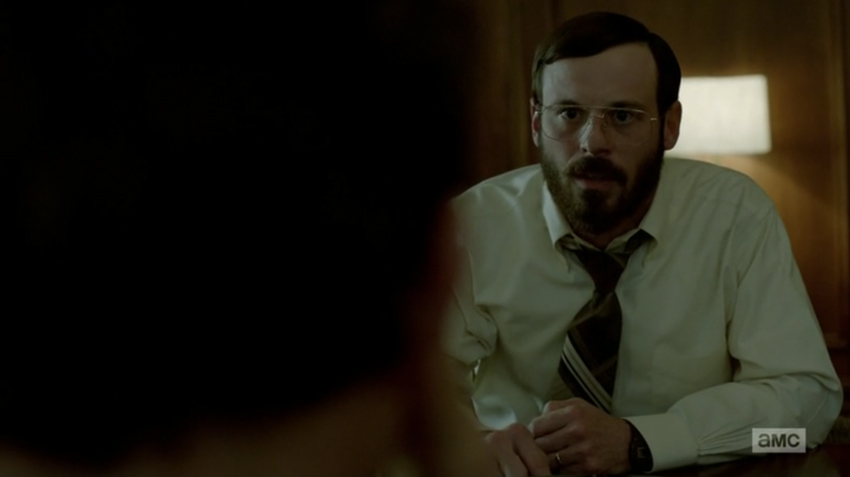 'The Catcher In the Rye'

When IBM poaches away Cardiff’s customers, Gordon assumes that Joe must have anticipated this kind of move and has some sort of retaliatory strike at the ready. When he finds out he doesn’t, Gordon levels a pretty intense charge at Joe. "You’re like one of those guys that goes out and reads Catcher in the Rye too many times and then decides to shoot a Beatle," Gordon says. "Only in this story I’m the Beatle."

It’s been almost 34 years since a disturbed man named Mark David Chapman shot and killed John Lennon outside the singer-songwriter’s apartment building in New York. Chapman had become obsessed with J.D. Salinger’s The Catcher In the Rye, using the novel’s fictional lead Holden Caulfield as a character model. When police arrived at the scene of Lennon’s murder, they found Chapman there, a copy of Catcher in hand. 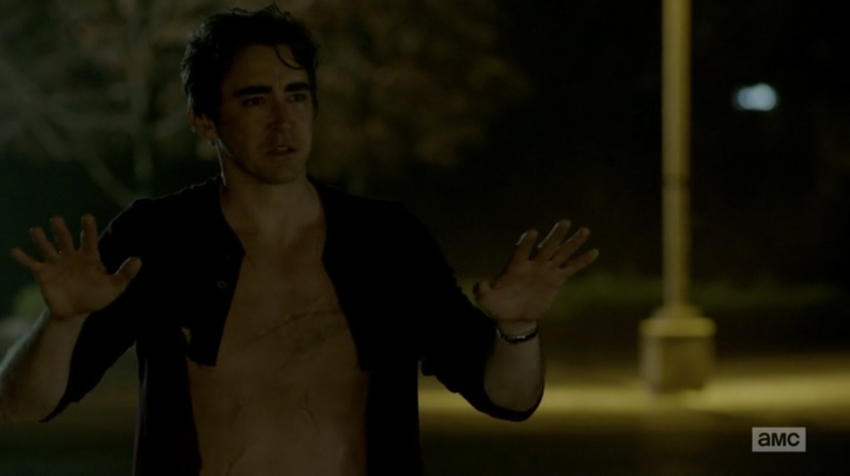 What happened to Joe?

When it appears Cardiff is falling apart, Joe and Gordon end up tussling in the company’s parking lot, with Cameron serving as referee. It’s not a particularly graceful fight, but Joe’s shirt eventually gets ripped open, revealing some brutal scars across his chest and torso. It’s a real left-field What the hell is this? moment in a show that's been playing as a pretty straight drama up until this point.

Joe turns on the tears and explains that it’s the result of a childhood accident. Some kids chased him off a roof because they couldn’t understand his unbridled passion for the Sputnik space program, he says, and he wasn’t able to watch the classic 1958 National Football League Championship Game because of it. He frames himself as an outcast — just like Gordon and Cameron are outcasts — and through the revelation is able to reunite the team and get everyone back on track working on the clone program.

Except Cameron calls him out on it the next day. Sputnik and the game were nearly a year apart, making his dramatic confession nothing more than theater. "Is that right?" Joe asks, and then the credits roll. It’s a great moment, Cameron demonstrating her savvy yet again, and along with the casual reference that Dale drops to Joe’s "old man" there's some real mystique building around Joe. Is he another Don Draper? Something more nefarious? Who is he really, and where did he come from — and what happened that fateful day he left IBM? Perhaps we’ll find out more next week, but something tells me we’ll be asking these questions all season long.

What did you think of the latest episode of Halt and Catch Fire, and what were some of your favorite details? Sound off below — and let the spoilers fly!