Taking control of a flight simulator can be hard work when you don't know a thing about airplanes, but for retired military pilots, it seems that controlling a virtual plane is still second nature. On Reddit, user jwsimmons has been describing occasional ventures over to assisted living homes with a full flight simulator setup so that seniors, including a number of veterans, can try taking to the skies. Jwsimmons says that it's been quite successful, and that with a few tweaks to make the controls a bit simpler, the experienced pilots he's shown it to have had few problems recognizing all of the dials, throttles, and other commands needed to fly.

"They'd fly and reminisce."Setting up the game and teaching vets and other seniors how to play it is apparently a hobby of jwsimmons, who says that it has been brought an assisted living home every month or two for close to a year now. The game it uses, War Thunder, is a massively multiplayer flight and battle sim, but jwsimmons says that all of the planes used during the assisted living demonstrations have been disarmed, so there's no combat. "Wanted to keep it all positive," jwsimmons writes. "They'd fly and reminisce." The setup also includes an Oculus Rift, so that its users can feel just like they're actually flying, though jwsimmons seems to start people out just flying on a TV for the sake of simplicity. 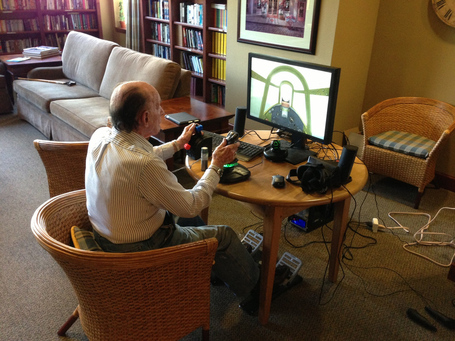 Jwsimmons published photos and write-ups of the initial experiences with War Thunder at assisted-living homes last year, but one photo rose to attention on Reddit late Sunday night. In updates in that thread, jwsimmons says that the setup has been improved since then, which can be seen in a recent series of photos and a video (below) showing that it's become a bit more involved. Jwsimmons says that the photo above, which gained attention on Reddit, shows a pilot named Jack who flew Wildcats, Hellcats, Corsairs, and a number of other planes and helicopters during World War II. "Hell of a pilot on the PC as well," jwsimmons writes.