Your phone can finally do something really great: help endangered animals

Share All sharing options for: Your phone can finally do something really great: help endangered animals

Around the world, species are going extinct at an unprecedented rate. They’re dying so fast and from so many different causes — habitat loss, climate change, hunting, competition with invasive species — that scientists no longer have a good sense of which need protection. A study recently published in Science estimated the extinction rate to be 1,000 times higher than the natural rate. It also proposed a novel way of figuring out which species are endangered: nature geeks with smartphones.

"We’re all carrying around these sophisticated sensors," says Scott Loarie, co-director of iNaturalist, an app singled out in the Science paper. "It has a camera, GPS, a clock." You used to have to go out and capture a specimen and bring it to a museum for experts to identify, Loarie says, or tranquilize an animal and collar it with a sensor. "Now instead of collaring elephants we’re collaring humans. Everyone has a sensor in their pocket. If we can incentivize them to take pictures of elephants, butterflies, plants, it could be a real renaissance."

"I think a lot of people don’t realize how little we know."

iNaturalist is essentially a photo-sharing app for nature pictures. Users take a photo of a plant or animal and upload it to the site, where other users help identify it. The app automatically tags the observation with GPS coordinates, date, and time, providing a precise and near-real-time map of biodiversity.

Photos uploaded to iNaturalist have helped track the American pika, an adorable mountaintop rodent threatened by climate change, and identified at least one new frog species, a red poison-dart frog photographed in the Colombian Andes. It also aided in rediscovering a species of mussel thought to be extirpated from the Northeast United States and helped track invasive geckos in the Southwest. Scientists have used the program to monitor everything from tumors in Hawaiian sea turtles to the syndrome that has been causing starfish to disintegrate along the Pacific coast. More useful than these individual projects, however, are the data generated about what animals live where, data that will become increasingly valuable as more species are threatened by habitat loss and climate change.

iNaturalist was devised by Ken-Ichi Ueda, a web developer and self-professed nature dork. Shortly after moving to the Bay Area from Connecticut, Ueda started a blog to post pictures of the plants and animals he saw on hikes. "I was in awe of all the cool new things out here, and I was challenged as to how to teach myself everything," he says. Several years later, with the help of two classmates in his master’s program at the UC Berkeley School of Information, he took the idea and made it social, a place where anyone could post pictures for others to identify. For Ueda, iNaturalist has always been a next-generation field guide. "If there’s any scientific outcome, any data generation, that has always been a secondary product," he says.

All this data is making new forms of conservation possible

Yet the site began generating lots of data, with over 700,000 photos uploaded so far. The Global Biodiversity Information Facility, an international database of species records, has incorporated about 300,000 of iNaturalist’s research-grade observations. (When a photo reaches two-thirds consensus, it’s classified as "research grade.") The International Union for Conservation of Nature, which publishes the Red List of Threatened Species, now draws on iNaturalist data to assess the status of flora and fauna around the world. Last month, iNaturalist was acquired by the California Academy of Sciences, which had already been using the platform in its citizen-science programs.

Crowdsourcing in science is nothing new. Thomas Jefferson organized a network of observers to monitor the weather, and the Audubon Society has been holding annual bird counts since 1900. Much of the historical information we have about species comes from amateur naturalists who pressed leaves, pinned insects, or stuffed animals and brought them to museums. Apps like iNaturalist, iSpot, and Project Noah have streamlined this process — and in doing so, they’ve unleashed a flood of data that can make new forms of conservation possible.

One of the earliest crowdsourced biodiversity programs, eBird, recently provided the foundation for a new type of pinpoint conservation. Launched in 2002 by the Cornell Lab of Ornithology and the National Audubon Society, eBird began as a way for birdwatchers to submit information about where, when, and what species they saw. But as more data got submitted — it now has 175 million observations — birders started using eBird to find out where they would be most likely to find certain birds. Eventually, researchers at Cornell were able to combine eBird data with satellite imagery of different habitats to make heat-map forecasts of where birds would be.

"It’s become one of largest databases ever of any biological phenomenon," says Mark Reynolds, a scientist with the Nature Conservancy. "The scientific implications of this data are just beginning to be understood."

This year, Reynolds and his team used the eBird database to create temporary habitat for birds exactly where they needed it. Migratory shorebirds flying between the Arctic and South America must pass through California’s Central Valley, a 450-mile stretch that was once rich in wetlands but now is mostly large-scale farms. However, some of these farms, notably rice, are irrigated by flooding the fields, turning them into ersatz marshes for brief periods. If irrigation could be timed to coincide with migration patterns, the birds would have a place to stop. So The Nature Conservancy overlaid eBird models with satellite maps and then paid rice farmers in barren areas to tweak their irrigation schedules. Eric Hallstein, the economist who designed the reverse auction system that pays farmers to keep their fields flooded, calls the new method alternately "pop-up habitat" and "precision conservation." So far, it seems to be working.

The first test was this spring, as the birds flew north for summer. By late March, Nature Conservancy monitors counted about 120 birds per acre in rice farms participating in the program, and almost none in those that weren’t, according to Reynolds, a sign that the flooded crops were providing much-needed habitat.

"As someone who’s been in conservation for a long time, it’s a real game changer," Reynolds says. "I’ve not seen anything really like this." 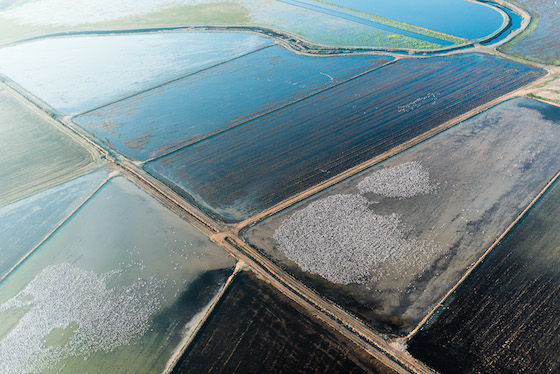 Hallstein hopes to expand the program, called BirdReturns, to other crops that use flood irrigation, and possibly start a similar project for migrating salmon. If we know when salmon are migrating, he says, we could pay grape-growers to leave enough water in the streams for fish to get to the ocean and back.

This style of conservation wouldn’t work for everything. Permanent reserves will always be better at protecting whole ecosystems. But for certain species that must migrate through increasingly human-dominated landscapes, this dynamic approach is a powerful tool, and it’s made possible by vast amounts of data collected by amateurs.

Whether iNaturalist and similar apps can do for other wildlife what eBird did for birds is unclear. After all, birdwatchers were already obsessively recording the birds they saw; Cornell just turned the birder's checklist into an app.

"You’re never going to have an army of beetle watchers in the way we have an army of birdwatchers," Loarie acknowledges. "But with iNaturalist, you don’t have to know what you’re looking at, you just have to want to know what it is." He hopes to cultivate a "safari culture," where people turn to iNaturalist to identify flora and fauna, and thereby provide data for scientists struggling to understand massive environmental changes. "We have a real responsibility to do that if we’re going to make policies on climate and agriculture and development," he says. "There’s so much guesswork that goes on. I think a lot of people don’t realize how little we know about what’s happening with species around the world."