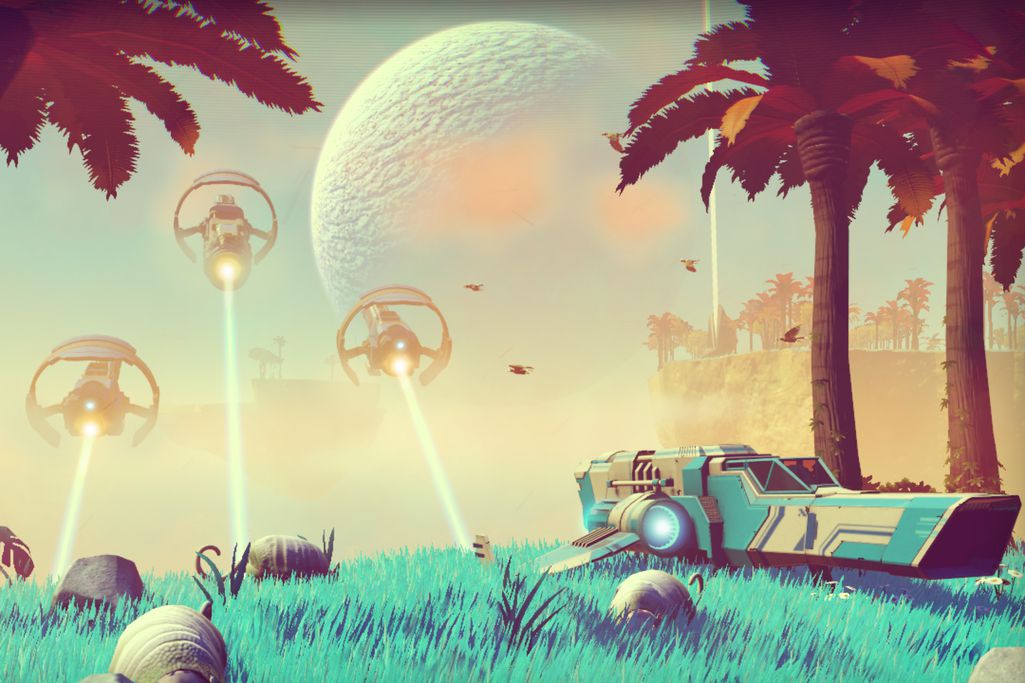 Summon up every great space-exploration fantasy of the past century — from mining exotic planets in uncharted space to watching attack ships on fire off the shoulder of Orion — and convert that compendium of awesome into a game of unprecedented size and scale. That, in rough terms, is the motivation behind No Man’s Sky. This game doesn’t just aim for the moon or the stars; it wants to deliver an infinite universe filled with all types of celestial bodies and an endless variety of possible adventures. It’s one of the most ambitious projects in gaming today and it’s being created by a 10-person team working next door to a taxi company.

Founded in 2008 by a group of four friends leaving big game companies, Hello Games enjoyed success with its first title, 2010’s Joe Danger, before being thrust into the E3 spotlight this year with a gameplay demo of the refreshingly original No Man’s Sky. In a show overrun by predictable sequels and violent antics, its more peaceful exploration stirred up widespread acclaim and anticipation. This past week, fresh off his appearance on gaming’s biggest stage, Hello Games founder Sean Murray sat down with me to discuss the unique universe his company is trying to build and the challenge of doing so with a team small enough to fit into a single room. Plus, he let me try it out for myself.

"Games are incredibly bad at making the rare feel rare," says Murray. "Call of Duty is so worried about you not seeing an explosion every 15 seconds, that there’s never a quiet moment, there’s never a buildup. We’ve lost that ability to have even a feeling of ‘am I going the right way’ that we’re quite used to from real life."

No Man’s Sky spurns the conventional structures of pre-written narratives, set-piece action sequences, and discrete levels. There are no quests in this game. You don’t go planet-hopping to find a damsel or a merchant in distress and then fetch them three healing salves and four wolf pelts of varying colors. In fact, at the outset, you can’t hop very far at all. Each player is handed only the bare necessities for survival, dropped onto a planet on the rim of a galaxy, and left to his or her own devices. A basic life pod will putter you up to the nearest space station where you can begin to figure out how to get such devices, upgrade them, and do something useful or interesting with your life. Most people will start by either mining resources or trying their luck as a bounty hunter or freight security guard. What career paths lie beyond those basic professions is part of the exploration you’ll have to do.

Mine for resources or murder for profit — what sort of space capitalist will you be?

Having to come up with your own objectives and measures for success will be a bewildering premise for a generation of players habituated to receiving explicit directions followed by a pat on the back for every small achievement in a game. Mario jumps and a shiny gold coin pops into the air. The only thing that happens in No Man’s Sky when you jump is that you land back down. Manually piloting your spaceship from the ground to the nearest space station isn’t just the scenic route to leaving the planetary surface, it’s the only way into space. There’s a pervasive insistence on the plausible realism of space exploration that distinguishes this game from most in its genre.

A single universe will be shared by all players of No Man’s Sky, though they’ll be so distant from one another that coming across some other player-controlled spaceship will feel like a truly noteworthy event. As Murray explains, "people underestimate how vast our (in-game) universe is. If we were lucky enough to have a million players and started them all on one planet, they would still be really far apart." So the enormous cluster battles of EVE Online are unlikely to ever materialize in No Man's Sky. 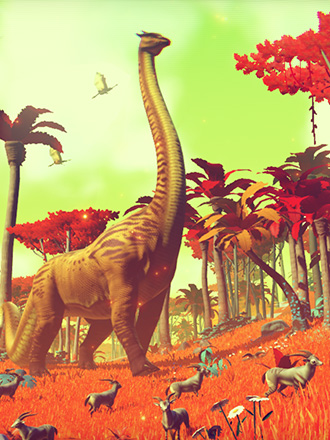 The game pays due respect to the science of sci-fi

The other name that No Man’s Sky inevitably brings to mind is Spore, the genre-bending game from SimCity creator Will Wright that first introduced procedurally generated games — which dynamically create their worlds through algorithms rather than human design — to the mainstream. Murray describes that Maxis title as a millstone around his neck that gave games like the one he is building a bad name. It made everything fantastical. Every planet was lush, with a thriving ecosystem of spectacular and weird creatures. That’s what the trailer for No Man’s Sky depicts too — with fluorescent dinosaurs grazing alongside space antelopes — but Murray says that will be a very uncommon sight in his game.

The developers have set themselves a 90–10 rule. 90 percent of all the planets will not be habitable and won’t have any life on them. Of the 10 percent that do, 90 percent of that life will be primitive and boring. The tiny fraction of garden worlds with more evolved life forms on them will thus be almost as rare in the game universe as they ought to be in the real one. This scarcity is part of the delicate balance that Hello Games is trying to strike between its idealistic commitment to the science of sci-fi and the inherent need to keep players entertained.

This is, after all, still a game, and there are a number of subversive ways in which players are nudged to keep going and exploring. While you can’t level up your hero, you can equip him or her with a jetpack to make those gravity-bound jumps last longer or buy a hyper drive to allow for interstellar travel. There’s an infinite diversity of spaceships you can obtain in the game, but you can’t build them yourself and can only buy the ones docked at space stations. To find the perfect one, you might well have to leave your solar system and see what else is out there.

Ultimately, whether acting as a peaceful trader or a marauding raider, every explorer begins to get drawn in to the center of the universe. Riskier and more lucrative opportunities await travelers of all creeds. Effective cooperation, says Murray, will then be important to achieving each individual’s goals. "The reality is we don’t know what people will do — will they create spokes of a wheel where they cooperate to try and get to the center, or will it be totally chaotic and everyone will go off in different directions?" The crowd dynamics of No Man’s Sky are as excitingly unknowable as the vast expanses of its universe. And Hello Games is as curious to find out where it all leads as the rest of us, with Murray admitting that "we don’t actually know everything that’s out there in this universe we are creating."

Hello Games works around the innate conflict between the scale of its new game and the small size of the team building it by using procedural generation. As Murray puts it, the heart of this game is "a big black box full of math that generates everything on the fly." Instead of having an artist draw every in-game asset or landscape, No Man’s Sky uses a library of base prototypes, randomizes their parameters along a set of rules for internal coherence, and produces a form of organized, infinitely diverse chaos. Those rules are crucial to making the universe believable, and the color, size, geology, and even moisture of each planet will be affected by its distance and relation to the nearest star. 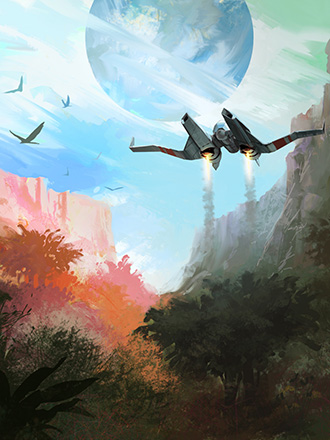 You’re not a passenger on this voyage of discovery, you’re the pilot

No Man’s Sky already has the skeletal structure to be a cosmically sized playground that we all can share in. The game’s still in development, however, and numerous questions remain to be answered. There are buildings visible on some planets, but how much can the player build? And, on the other side of the same coin, how much will you be able to destroy? A Han Solo simulator can’t be complete without the possibility of a dimpled Death Star to fight against.

Or maybe it can. Sean Murray isn’t ready to promise anything he’s not certain he can deliver in the final game, but he’s okay with it seeming to lack features and options when it’s released. He sees a trend — borne of the success of open-world games like Minecraft and the buggy but beloved DayZ — that shows people actively engaging with games before they are complete so as to provide their input and participate in their creation. Some gamers prefer to invent their own meaning and purpose, and No Man’s Sky wants to be the most epic canvas for their expression. Where the game’s development goes, what criteria are used to determine success within it, and the ultimate reason for its existence are all things that the players themselves will have to figure out.

Finally, before concluding my visit to the Hello Games studio, I was handed a PS4 controller and allowed to take my own tour of No Man’s Sky. Exploring the colorful planet from the company’s demo reel, I scanned a mossy cave for resources, scared away a few deer scampering about bright-orange underbrush, and got carried away with my jetpack. There wasn’t any point to it other than sheer curiosity, but nothing more was needed. The dreamy sci-fi ambience made the experience of exploring rewarding enough by itself. No Man’s Sky is not a game that you can win or lose, but it certainly won me over at the first attempt. Look for it on PC and the PS4 at an appropriately indeterminate point in the unexplored future.

See Next: Behind the scenes at Hello Games, makers of 'No Man's Sky'