Can Snapchat make money without losing its cool?

Can Snapchat make money without losing its cool?

Snapchat is an unconventional company. From its faux-apologies to its reported rejection of a $3 billion acquisition offer from Facebook, the Los Angeles startup is anything but predictable. And the company has launched new products at a rapid clip: in the last year alone, Snapchat has rolled out a storytelling platform called Stories, video chat, and text messaging. It’s clearer now, perhaps more than ever, that Snapchat CEO Evan Spiegel is in it for the long haul.

If Snapchat is indeed in the game to make money, and not simply to grow a massive user base and sell to the man, the company’s going to need to think about monetization. And it has. If you’ve been paying close attention, you might have already noticed Snapchat has been conducting experiments right under your nose. They offer some early hints as to how the company is thinking about making money — and that it’s not just Facebook that Snapchat doesn’t want to take part in. It’s Facebook’s ad-based business model.

The jury’s still out on the most effective and unique ways to monetize the mobile apps we’re spending an almost dizzyingly high percentage of our lives with. Display ads work, but click-through rates (the number of people who click an ad after seeing one) are miniscule. Meanwhile, Japanese messaging app LINE is cashing in to the tune of $10 million per month by simply selling digital stickers. Yes, stickers. LINE caught the eye of Evan Spiegel, who once stated that in-app transactions of some kind would be where he’d look first for monetization, but how exactly is that going to look? 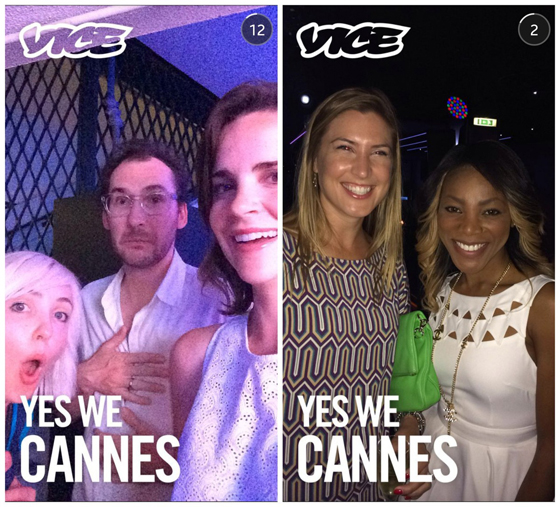 Most simply, Snapchat’s business model could encompass both taking snaps (creation) and viewing them (consumption). The company has experimented with offering location-based filters and content at a few different events recently, one for a Vice party and one for the Electric Daisy Carnival. These photo filters and watermarks, both bearing brand emblems, were free to use, and only available if you were at a specific location. At Electric Daisy Carnival, Snapchat also featured a compilation of public snaps from users called Our Story. The most interesting part of Our Story is that Snapchat users anywhere in the world could view it. No money changed hands, according to sources close to the partnerships, but Snapchat could very easily charge brands to feature sponsored filters or watermarks, in general or at specific events.

To help build out its monetization scheme, Snapchat recently hired former Facebook executive Mike Randall as its new vice president of business and marketing partnerships. Part of Randall’s job will be selling Snapchat’s desirable user base. A recent Pew study says that 26 percent of 18- to 29-year-olds use the app, and the study doesn’t even include the sub-18 category, where perhaps an even larger percentage of people use it. Dozens of top brands are already creating free Snapchat accounts to start experimenting with ways to engage fans on the platform. One such brand, Sour Patch Kids, just this week started an account under the handle SourPatchSnaps. 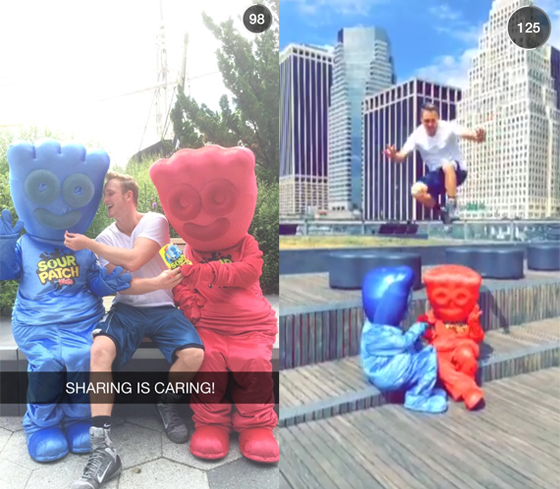 "We see Snapchat as a very personal way of connecting with our Sour Patch Kids fans, since it enables us to send them content and messages one-to-one," says Farrah Bezner, marketing director at Mondelez International, which makes the candies. "Even though our fans are using many different social channels each day, Snapchat stands out as a way to engage more personally with them." SourPatchSnaps has begun sending out short videos of Vine celebrity Logan Paul showing off his "sour-then-sweet" personality. Bezner says that Paul will even reach out to some followers individually using Snapchat’s new video-chat feature. NOW, the music-compilations company, has also offered its Snapchat friends exclusive track teasers.

Brands are loving Snapchat, it seems, but Snapchat needs to convince them to pay up. At New York startup Aviary, a business model built on sponsored filters and watermarks is already in place, and offers some early clues as to where Snapchat might stand when it decides to monetize. The company, whose photo-editing platform reaches more than 75 million monthly users, has worked with several brands like Disney, Proctor & Gamble, Samsung, Target, and Gap on sponsored content campaigns that range from $50,000 to $250,000 each. "Our benchmark click-through rate is 3 percent," says Aviary CEO Tobias Peggs, "while banner ads in mobile are .01 percent."

The trick, he says, is not being too cheesy about sponsored content and offering actual utility to users. Content packs in Aviary apps don’t rub logos and marketing content in your face. They instead offer, for example, an American Express filter pack that lets you watermark photos with the company’s new social media tagline, #everydaymoments. One filter included in the pack bears no signs of American Express sponsorship at all, but in order to access it you have to tap on an American Express logo. A recent campaign with Disney targeting 15 million users saw more than 5 million stickers, frames, and filters applied permanently to users’ photos. An industry source estimates that brands are even willing to pay $25,000 for one-time sponsored content placements if the app or website is hot enough.

One jeering Snapchat filter is only available at Facebook HQ

While Aviary can measure total shares from its apps, it cannot measure how many people its sponsored content campaigns have reached — all of your friends who have seen your post on Facebook, Instagram, and Twitter. Snapchat, on the other hand, knows exactly how many people each snap reaches, which could help it pitch brands on the reach of a snap. The potential here is enormous, since Snapchat’s 50+ million users share over 700 million snaps per day — more photos than Facebook’s 1.3 billion users share.

For now, at least, Snapchat’s filters and watermarks only work when you’re in a specific location, which fits Snapchat well. The company has built its core experience around replicating real experiences in the digital world — lowering the barriers to sharing, and alleviating fears of digital permanence. Giving users the ability to stamp a photo with where they are provides one more opportunity to give messages more context and authenticity. Dozens if not hundreds of location-based filters seem to be active out in the world. I’ve seen Manhattan, Brooklyn, and Financial District filters become available when I move from place to place, and Viddy app creator JJ Aguhob even discovered a hilarious, jeering filter (pictured below) that’s only available at Facebook headquarters in Menlo Park, CA.

An even more compelling scenario for brands might be sponsoring Stories, which are viewed over 1 billion times a day. If the company’s first collaborative "Our Story" test at Electric Daisy Carnival was any indication, Stories are going to be an incredibly visceral way to experience live content. Snapchat could entice brands to sponsor live events the same way they do with TV, where they pimp their logos on the sidelines and before commercial breaks. Some brands are already giving Stories a shot. "Snapchat allows us to represent ourselves in a really unique way," says Tom Fishman, vice president of content marketing and fan engagement for MTV. "The faces who work here, the community managers, the war rooms, the people creating the content — basically MTV selfies! Our audience is there, and they’ve really responded to it. Plus, we like to doodle."

Sponsored Stories experiences might be more interesting to brands, especially since sponsored filters are somewhat hidden inside the Snapchat app. "The tricky thing with filters in Snapchat is that they’re hidden [behind a few swipes in the camera screen]," says Carmel Hagen, Aviary’s director of brand integration. "Delivering that many impressions that way isn’t optimal." Another potential issue for Snapchat is that none of these ideas scale in a predictable way. Every campaign might require someone at Snapchat helping out on the inside.

Snapchat might turn on sponsored features one by one or not at all, but it’s not so hard to picture a future where 100 events worldwide at any given point have sponsored Snapchat content attached to them. Every Snap watermarked with Red Bull+Ibiza123 festival isn’t a lame ad, but is proof that you’ve been somewhere cool. One filter might have a Bacardi bottle sticker you can carefully place over your friend’s mouth, and another watermark just says #YOLO. In some situations a time-based constraints would make more sense than location constraints. A Super Bowl Party Tostitos sponsorship could let you put a sombrero on a friend, but would only be accessible for one day. Snapchat’s sponsored content could disappear, just like snaps. In that scenario, everybody wins.