The war of words continues: Verizon says Netflix is the one causing internet congestion

The war of words continues: Verizon says Netflix is the one causing internet congestion

The streaming video company is unique in its traffic demands

Verizon, in an ongoing and escalating war of words with Netflix, put up a blog post today arguing that the streaming television provider is the real cause of internet "congestion" that has created performance issues for its customers. Netflix had previously sent its customers messages blaming congestion on Verizon's network, messages it withdrew after a Verizon filed a cease and desist. And while many consumers have been siding with Netflix in blaming the big ISPs, the truth is that Netflix shares a big chunk of the blame.

Understanding the fight, which has consumed the entire industry in recent months and now rests in the FCC's lap, requires a basic understanding of how traffic moves across the internet. Certain ISPs and transit companies have "settlement-free" peering arrangements — deals that allow them to exchange traffic at no cost. But content companies like Netflix, YouTube, Facebook, and AOL, which flood the network with traffic without taking any in return, have always paid third-party providers to move data from servers they own to the ISPs which carry it into consumers' homes. As the amount of traffic surging across the internet has ballooned, the price of data transit has steadily declined; the middlemen who move and cache data have expanded in size and number, and the customers who they serve have been paying less each year for their services.

So why is Netflix having issues? For one, Netflix is a true outlier when it comes to the amount of traffic it sends, especially during peak times when its subscribers are solidly planted on their couches. Netflix, like every other content company, has choices about which companies it wants to pay to deliver that traffic. Verizon is saying that Netflix, instead of spreading its traffic around multiple transit providers, is trying to cram massive amounts of data through certain channels, overwhelming connections to the ISPs and creating the "congestion" that has become the center of the ongoing disputes between Netflix and internet providers. 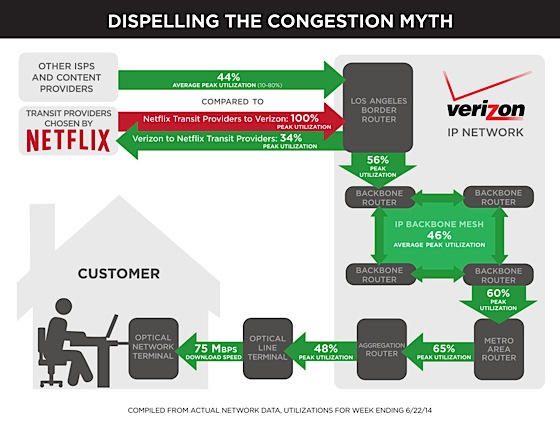 A Verizon illustration visualizes its argument that Netflix is clogging its pipes.

Netflix says it does not "purposely select congested routes", but independent data supports Verizon's argument. A study by Sandvine found that Netflix was choosing over-utilized transit options for its data when it had clear alternatives, a decision that resulted in performance issues. Another independent review of internet congestion from MIT found that there is little to no "congestion" as data moves around the broader internet, and that the only recurring and significant issue was Netflix's traffic.

The argument often made by Netflix — and by consumers — is that subscribers pay their ISPs each month to receive data from the internet at a certain speed. If customers are requesting massive amounts of video from Netflix that's overwhelming back-end connections, the argument goes, then ISPs should pay to upgrade their infrastructure.

Hey @Verizon, Netflix is not pushing traffic on me. I am requesting that traffic and I am paying you (far too much) to deliver it to me.

Of course, ISPs — oft-reviled cable and telephone companies — make convenient villains. But it's flawed logic: if an ISP like Verizon pays to upgrade its network because Netflix customers are requesting more traffic than it can handle, all Verizon customers (including those who don't use Netflix) end up footing the bill. If, on the other hand, Netflix pays for the upgrades, then the cost will be passed only to the users who are responsible for the congestion.

Netflix has done an admirable job convincing the public that it should be allowed to send as much traffic as it wants to an ISP without paying extra, either to third parties with spare capacity or for a direct connection. In doing so, it's hoping to change the basic structure of a marketplace — internet transit — that has actually managed to drive prices down while expanding in scale. That helps explain why behind the bluster, money has actually been changing hands: Netflix has recently agreed to begin paying Comcast and Verizon for traffic, deals that will likely give it better performance at a lower price.

Update July 10th 6:02PM: In a statement to The Verge, Netflix calls on Verizon to upgrade interconnections to prevent bottlenecks:

"We'd like to thank Verizon for laying out the issue so nicely. Congestion at the interconnection point is controlled by ISPs like Verizon. When Verizon fails to upgrade those interconnections, consumers get a lousy experience despite paying for more than enough bandwidth to enjoy high-quality Netflix video. That's why Netflix is calling for strong net neutrality that covers the interconnection needed for consumers to get the quality of INTER-net they pay for."

More from this stream Netflix takes on internet providers: the fight for the future of online media