AES+F makes art more terrifying than any dream you've had

In one room, a shirtless, redheaded boy is about to drive his sword through the stomach of a child on a snowcapped mountain. In another, statuesque models lounge on a digital beach as a hurricane of golf balls storms overhead. Down the hall, a black reverend is reading the bible on the back of a centaur in an airport, waiting for a plane that’s buried in snow.

As visitors to this museum in Switzerland shuffle from one space to the next, Tatiana Arzamasova looks on with regal dispassion, her hair a wild flame of red against cold white walls. It’s a sleepy Saturday afternoon in the idyllic city La Chaux-de-Fonds, and Arzamasova — dressed in a bright red dress with a huge matching bow across her chest — is here for the opening of the Liminal Space Trilogy: a series of stylized and often unsettling films about heaven, hell, and purgatory.

The first installment, Last Riot, caused a stir in the art world when it debuted at the Venice Biennale in 2007, catapulting Arzamasova, 59, and her Moscow-based collective, AES+F, to new levels of international fame. The subsequent videos, Feast of Trimalchio (2009) and Allegoria Sacra (2011), have been met with similar acclaim, challenging viewers with their jarring visual effects, clashing symbolism, and opaque social commentary.

Saturday’s opening was held with much pomp, as visitors sipped cocktails and mingled with costumed models at the Musée des Beaux Arts, but Arzamasova has become comfortable with the attention. For nearly three decades, she and her partners — Evgeny Svyatsky, Vladimir Fridkes, and Lev Evzovitch (also her husband) — have been creating videos, sculptures, and digital projects together as AES+F, rising in tandem with Russia’s post-Soviet art boom during the late 1990s and early 2000s. Their work has been shown in scores of galleries and museums across the globe, often with provocative motifs. Their 1996 installation, The Islamic Project, features an image of the Statue of Liberty wearing a burqa. Europe-Europe, completed in 2007, includes a porcelain figurine of a neo-Nazi girl lovingly twirling the hair of a Hasidic Jewish boy.

The imagery in the Liminal Space Trilogy isn’t as overtly political as some of their earlier work, but the project relies on many of the same clashes and collisions: East and West, antiquity and modernity, man and machine. The 39-minute Allegoria Sacra, based on an Italian Renaissance painting of the same name, opens at an airport — the contemporary version of purgatory — where Africans, Indians, and East Asians are waiting alongside a centaur, a skinhead, and a Christlike figure. The Feast of Trimalchio, inspired by an ancient Roman text, depicts "paradise" as a digitally rendered beach-ski resort, where power dynamics and relations appear to have blurred, if not dissolved completely. In one scene, the hotel’s Asian waitstaff lounge before a table full of fruit; in another, people dressed in tribal garb receive massages. 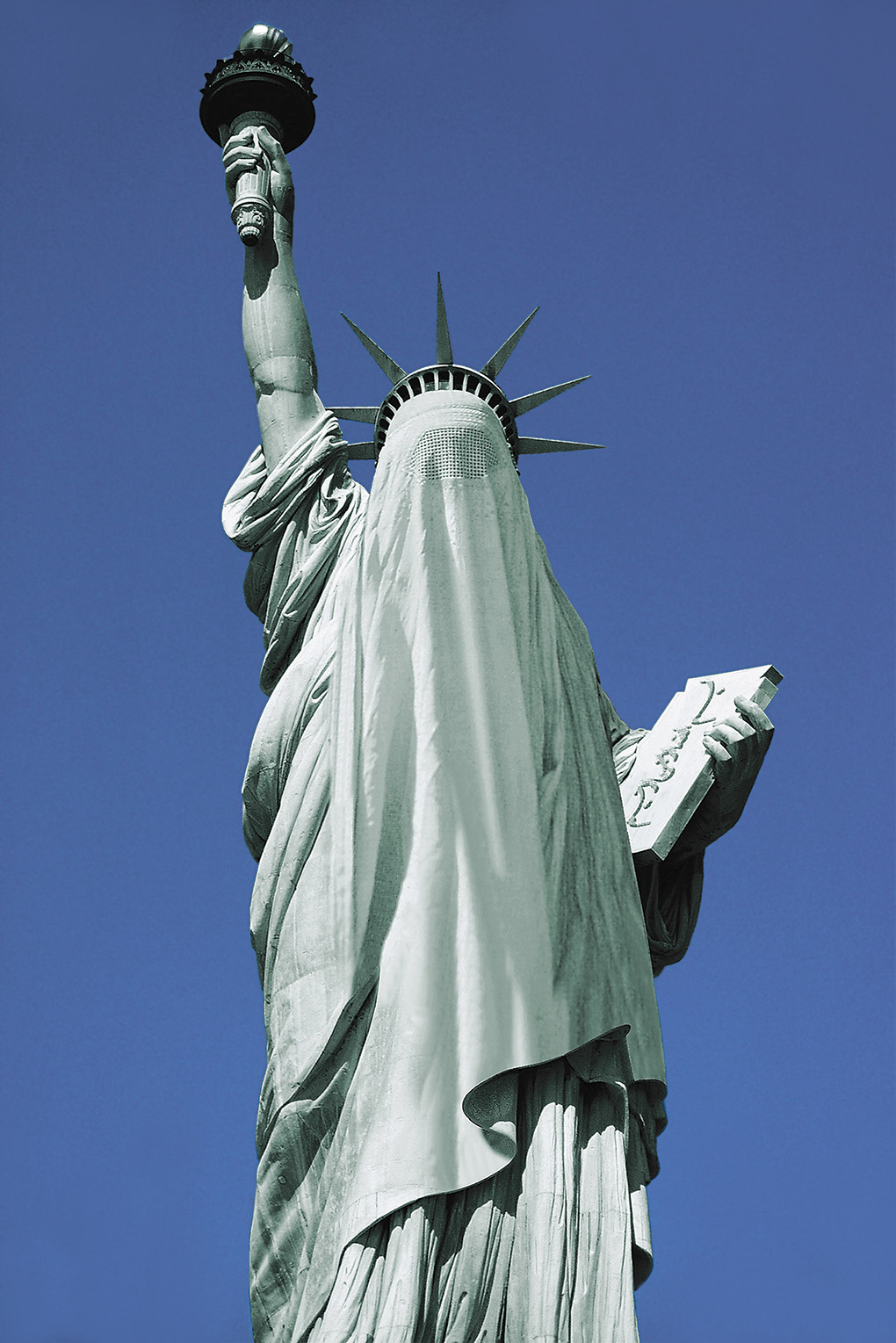 More often than not, The Trilogy is profoundly creepy

The three films are all devoid of dialogue, relying instead on classical scores and the slow-motion movements of actors against a green-screen digital backdrop. At times, they seem balletic. More often than not, they’re profoundly creepy — especially in Last Riot and Trimalchio. In each film, the actors are "animated" by stitching together still photographs, resulting in characters that Evzovitch describes as "a little bit robotic, a little bit alien." Their movements are glitchy and uneven, their gazes cold and aloof. When displayed on giant screens, as the films were in Switzerland, the effect is downright chilling. 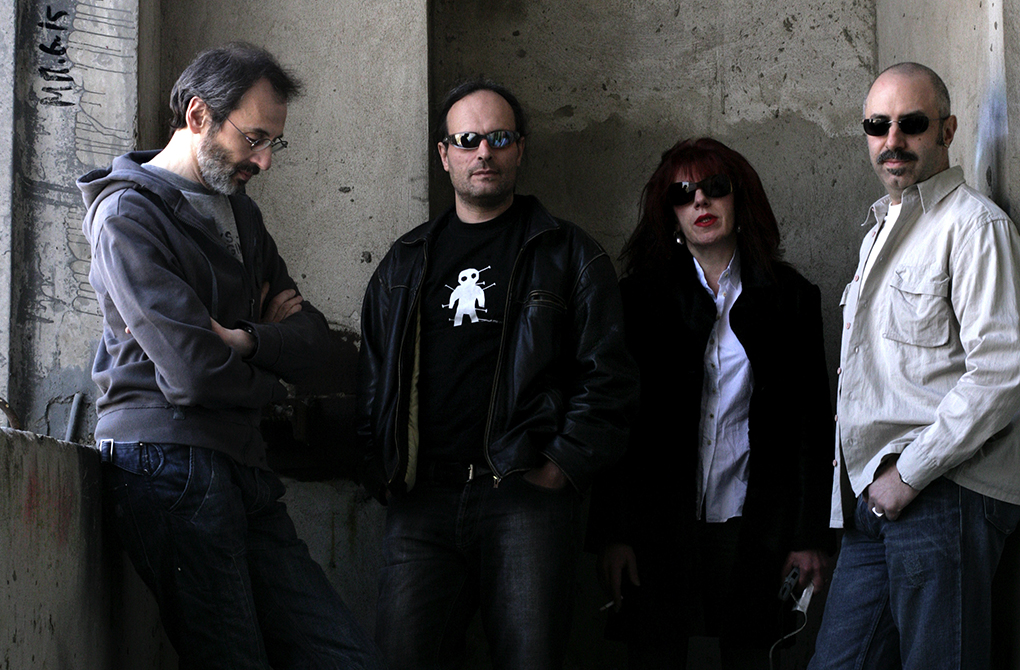 The artists see their work as a reflection of modern life — full of instability, vanity, and cultural collisions — which they cast in landscapes that are both digital and baroque. But the Trilogy makes obvious gestures toward the future, as well. Spaceships hover above an apocalyptic desert wasteland in Last Riot. Allegoria Sacra concludes with the birth of a baby with a reptilian tail, surrounded by women dressed in the white costumes from Stanley Kubrick’s 2001: A Space Odyssey. There are political allusions, to be sure; small American tanks roll through the desert, and an airplane morphs into an enormous Chinese dragon. But the Trilogy, like all of AES+F’s work, refrains from declarative statements or binaries.

"We never make direct conclusions and we never comment on things [that] are obvious," says Evzovitch, his long gray hair tied into a ponytail behind square shoulders. "We never work with [Russian President Vladimir] Putin, for example, because he is obviously very bad, so it’s not interesting for us."

Arzamasova and Evzovitch met when they were students at the Moscow Architectural Institute during the late 1970s, and both went on to have successful careers as conceptual architects. (Evzovitch worked in animation and film art direction, as well.) But it wasn’t until a friend introduced them to Syvatsky, a graphic designer by trade, that they decided to work together. They first collaborated on a design project for Moscow’s School of Dramatic Arts, and soon embarked on their own art projects as AES, which they formed in 1987. The "+F" came in 1995 with the addition of Fridkes, a former journalist and prominent fashion photographer whose images have appeared in magazines like Vogue and Elle.

All four grew up in Moscow, and have borne witness to the dramatic changes Russia saw during and after the Cold War. Although they acknowledge that art and information were filtered through Soviet censors when they were young, they say it wasn’t as repressive as many believe. 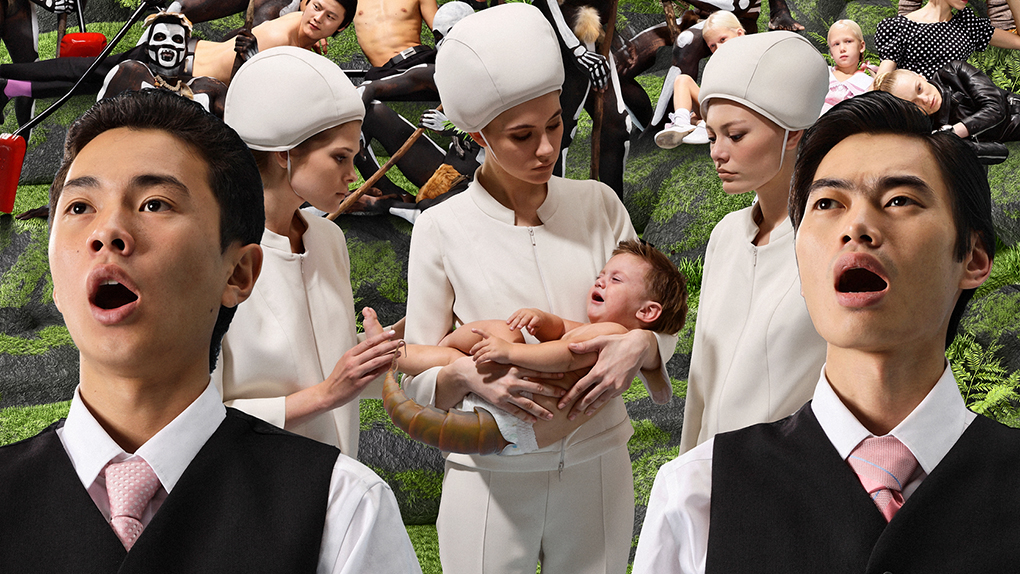 "The image of the [Soviet Union] in the West was a little bit distorted by propaganda," Svyatsky says, his thick black eyebrows raising into an arch. "People had an image of a country that was totally closed from any kind of information, cultural information. It wasn’t like that."

At first, they treated the collective as a side project, and continued taking commissions for commercial projects. That changed with Islamic Project, an installation that envisioned a future world dominated by Islam. Word of the project spread quickly throughout the media, and they eventually devoted themselves to AES+F full-time, buoyed by a Russian art market that was suddenly flush with cash from Moscow’s growing upper class.

All four members still live in Moscow, but they’ve recently considered relocating to Berlin, in part because of what Evzovitch describes as a "disgusting atmosphere" for artists under Putin’s government. The Kremlin has cracked down on free speech in recent years as part of Putin’s ongoing efforts to promote "traditional" Russian values. AES+F haven’t been persecuted or censored, though they say authorities have inquired about their work, and they remain uncertain about their future.

"Once the projects are done they’re not my children, they're their own creatures."

For now, though, AES+F is focused on their next project, Inverso Mundus, which they describe as a digital collage inspired by medieval engravings. They’ll also continue showing the Liminal Trilogy around the world, but Arzamasova says she’s only concerned with what comes next.

"I’m only in love with what I’m doing now," she said over dinner after Saturday’s opening in Switzerland. "I have no nostalgia. Once the projects are done they’re not my children — they’re their own creatures, off into the world."

All images copyright and published with the permission of AES+F.